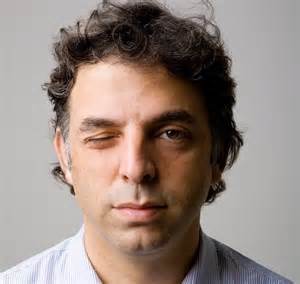 This was one of those events that I picked at random, on the grounds that Etgar Keret sounded like an interesting name, and I don’t know many Israeli people and would like to hear from one. I’m so glad I did.

Damien Wilkins interviewed Israeli author, filmmaker and cartoonist Etgar Keret at the Embassy Theatre. Keret was warm, funny, thoughtful and compassionate. I made an immediate resolution to read all his books.

He spoke about ‘the wandering Jew’, saying that the concept of a Jew living in their own country is pretty new. For example, a Kiwi Jew can think of themselves as a Jew (as distinct from New Zealanders) and as a Kiwi (as distinct from Jews). Reflexiveness is a fundamental Jewish trait, but that two-tier thinking is the first thing you give up when you have your own country. Keret travels a lot, and he says this travel enables him to reintroduce himself to Israel, and to be more aware of change.

Keret spoke about fighting, both in the sense of war and in the sense of the artistic struggle. He said his mother told him if he must fight, to fight someone smaller. He joked about his own small stature, saying in New Zealand maybe he could wrestle some possums. “I became a writer because it’s the only way I know how to fight and not to hurt anybody. I want to create in an environment that has some kind of friction; I want to to feel courageous in the creative sphere.”

He spoke about the subversive power of literature, saying “There’s nothing cultural about a boycott … You never know what you’re going to find in a book. I want people to read books and be affected by them.” Keret admires “the ambiguity of existence”, although “it’s difficult to keep this ambiguity when you live in a horrifying reality.” He spoke about how literature enables us to see all people, even people who do terrible things, as humans, and akin to us in their humanity.

Keret says the constant politicisation is tiring. “I have a yearning to live in Golden Bay and write a story about a kid who finds a crab and no one tries to figure out whether the crab is the Palestinians.” With his strong accent and beautiful voice, Keret was a pleasure to listen to.

Attended and reviewed by Elizabeth Heritage

Etgar will take the stage once more as a judge of Literary Idol, on Sunday, 13 March.