Anna Smaill’s dystopian adventure story, The Chimes, has perched itself on a shelf inhabited by my favourite books. It sits with Atwood and Byatt and Janet Frame and McEwan and Orwell. And it well and truly holds its own. This young New Zealander has crafted a vision of post-‘Allbreaking’ London, which is poetry and music and quest all in one. Smaill spoke with author and friend Paula Morris about her novel, just a few days before the announcement of the shortlist of the Man Booker Prize.

Smaill is disarmingly articulate. She dances us through the concept of the book, and recreates the setting – an indeterminate future in London where a musical instrument, the carillon, casts a mass amnesia over the bulk population. She describes the city and ‘the under’, the complex of tunnels below ground wherein the protagonist and his pact mudlark for palladium. She tells us about the way music is both breaker and maker of memories, and describes how people can use music to encode a sort of topographical map, by which they might navigate during the course of a day.

It would seem that music, and the order that promotes it, is an oftentimes malevolent force in Smaill’s story. But she tells us it is more Platonic ideal, a striving for order, a weeding out of ‘dischord’, than malevolence per se. That leads Morris to question Smaill’s own relationship with music. Smaill relates her past as a musician and a student of music, her own limitations as a violinist, and her ambivalence about the musical world. She hints, however, that she may make a return to playing, with a different instrument. 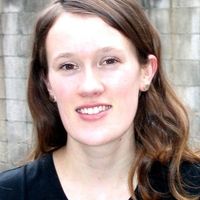 Smaill and Morris discuss memory, and the lack of memory, as a very central aspect of the book. Smaill talks about the difficulty of creating first person narrative under such constraints. Simon, her central character, is under the grip of the carillon’s amnesiac chiming, and so has a slippery hold on notions of other characters and events and places. Smaill tells us that, with these conditions in play, she was unable to employ many of the usual tools which help a writer create an idea of character.

Morris asks Smaill about the lexicon of her story – the portmanteaus, neologisms, musical terms and archaic words. Smaill says that many of the words, especially the portmanteaus, came about ‘organically’. There are words, too, where spelling has been chosen to give a word multiple meanings, as with her use of ‘mettle’. She credited Riddley Walker as an inspiration here.

Smaill and Morris also spoke about living in London, and about Smaill’s own process of, once back in New Zealand, trying to remember the city she left so as to finish the novel – a process, Morris notes, that is akin to the straining-to-remember that her characters endure.

Finally, there was talk about Young Adult fiction as a genre, whether The Chimes fits the Young Adult brief, and Smaill’s dismay at the banning of Ted Dawe’s award-winning book for young adults, Into the River. Oh, and she mentioned that she’s creating a new novel, set in Tokyo.

A splendid session. Anna Smaill was all I imagined her to be, and then some. I thoroughly recommend you acquire a copy of her novel.

Greg McGee is an extraordinary chap, who quipped that his occupational ‘devolution’ (I would venture it’s rather an evolution) has seen him move from a career in rugby, to law, to writing. He is perhaps best known for his 1981 play The Foreskin’s Lament, which tackled rugby culture in New Zealand. But today’s conversation focused on The Antipodeans, a multi-generational novel about a New Zealand family and its members interactions with the people of Northern Italy. Gee offered that there’s a bit of quantum physics and Auckland real-estate content thrown in.

In conversation with David Larsen, McGee spoke about his reservations about rugby culture, especially around the time of the 1981 Springbok tour. He suggests that now there is more diversity among its players, and that medical assistance is such that players can get thrashed, quickly fixed, and put back on the field so that they can get thrashed again. He spoke about alpha-males in society, and made the quick assertion that, no, despite being a six-foot-something rugby-playing male, he wasn’t one of them.

They spoke about McGee’s writings under the pseudonym of Alix Bosco, about the benefits and difficulties of working under pseudonymity, with comical anecdotes about his coming-out-of-the-closet as a female author. 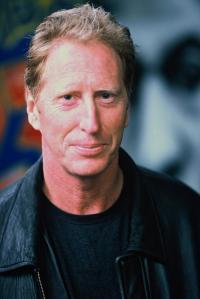 They spoke about McGee’s time in Italy, first when he was coaching rugby and later, as a recipient of the Katherine Mansfield grant, which saw him living in close-proximity Menton, France. The Antipodeans was born as a germ of an idea in the late 1970s, with a lengthy gestation period which saw the novel finally brought to light this year. McGee spoke about his realisation that there existed an Italian Resistance during the war, and the force that this had in the formation of his story.

David invited McGee to read from his novel. McGee suggests that it makes sense to commence at the novel’s beginning, and so he reads the first chapter. We are sent to Venice, where an elderly man and his newly-single daughter have arrived for a supposed reunion. Only, it seems that the father is transfixed with other ghosts from his past.

It is compelling storytelling, and, so, in the intermission I was set on buying another book, with fingers crossed that my Eftpos card would oblige. 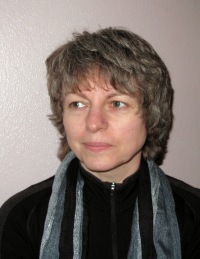 Paula Green’s NZ Poetry Shelf is a blog I pop in on regularly. Green claims that she only writes about poetry that she enjoys, which makes her reviews a breathe-easy and pleasurable read. She reliably sniffs out great local poetry, so my interest was roused when she announced that both session guests, Kerry Hines (right) and Leilani Tamu (below), had been subjects for her blog. Hines and Tamu are very different writers. But Green expressed that both drew uncannily similar responses in her reviews. As if to echo the uncanny, when asked to read from their collections, each chose poems with a titular ‘beach’. In both cases, the poems were atmospheric, and anchored to place.

Concept of place features heavily in both writers’ work. It is discussed that place can be temporal as well as spatial, and that place is often about people, politics, and the memories people have of place that morph over time. 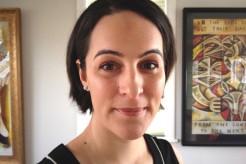 Kerry Hines’ collection, Young Country, draws inspiration from the images of nineteenth-century photographer, William Williams. These haunting photographs were presented to us in a slide-show, and feature alongside the poetry in her book. Leilani Tamu spoke about the photography (one photograph in particular) that set her on her poetry journey, along with influences of writers such as Albert Wendt and Karlo Mila.

These two poets are informed by their academic interests – Leilani’s Master thesis was titled ‘Re-defining ‘the beach’ – the municipality of Apia, 1879-1900’ and Hines’ doctoral thesis, ‘After the fact: Poems, photographs and regenerating histories’. Each poet spoke about the importance of archives to their writing process, the importance of libraries.

These are two poets I’ll be sure to keep an eye on. 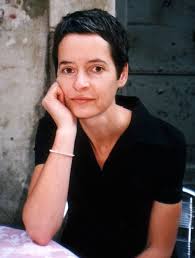 With shiny new books at my hip, I re-entered the hall to hear Rachel Barrowman, in conversation with Geoff Chapple (Gee’s cousin), about her biography of Maurice Gee. This was a fascinating talk about a man who they described in turns as mild-mannered and self-assured, with a sensitivity at odds with the often disturbing subjects of which he writes. A complex man, and a prolific writer, whose work is oftentimes an iteration of the darkness that is accompanist to life, even in childhood.

Barrowman and Chapple chattered about the centrality of the creek and the kitchen to Gee’s boyhood, the trials of his adolescence (it seems Gee’s mother was a ‘secular puritan’, and this rubbed off on her son). They spoke about his turbulent on-off relationship with Hera Smith, with whom he had a child; about his jobs as teacher, postie, hospital porter and librarian. They chronicled his overseas spells, and his eventual meeting with Margaretha Garden, who would become his wife and the mother of two daughters.

Gee’s writings were discussed too, with it noted that Gee had been on the writing path since sixteen, inspired, in part, by a year reading Charles Dickens. Discussion turned to Plumb, with Barrowman and Chapple teasing out family biography from fiction.

This was a very interesting event, but somewhat awkward to behold. Chapple unremittingly cut through Barrowman’s speech, to the visible exasperation of some of the audience. Barrowman did not seem overly fazed by these disturbances, and the session generated what was largely intelligent and nuanced dialogue.