I invited Sarah Jane Barnett to join me on the floor in the kids’ section of Unity Books just before Christmas to talk about Gecko Press and their amazing 10 years of publishing, with a half-cooked concept of coming up with the ultimate top 10 (or more) Gecko Press titles to recommend. Instead, we ended up having a bit of a fan-girl over some of our favourites, and talked a little about what sets Gecko Press books apart.

Sarah Forster: What do you think is your favourite Gecko Press book?

Sarah Jane Barnett: I think my favourite for me is Duck, Death and the Tulip (Wolf Erbruch, 2008, translated from German, 9781877467172), because I find it so moving. But my favourite for Sam is Snake and Lizard (Joy Cowley and Gavin Bishop, 2007, 9780958278737) What I like is that the stories are short, so we can read just one, or we can read many of them; and that there’s a lot of conflict in them that we can talk about, but they’re funny as well. I mean, what I like about all the Gecko Press books really is that the characters aren’t too sweet – they’re not smoothed out.
SF: Yeah, see, Reflections of a Solitary Hamster is a good example of that, because he is not a likeable guy, but you love him anyway. He’s really unpleasant to all his friends, and then they all come to his party anyway and give him really good presents. But you love it, and you can’t put your finger on why. That is one of my favourites. 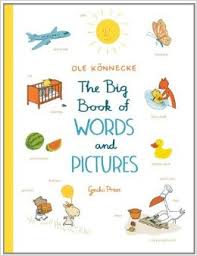 SF: My boys are completely different readers. Dan will read everything just once, while you will read the same books for a week to Alex, and he’ll still want them every night. Both of them though, went through a long period of obsession with The Big Book of Words and Pictures (Ole Konnecke, 2011, 9781877467875)*
SJB: I think that’s a brilliant book.
SF: It was published at exactly the right time for me, Dan was one. It was perfect!
SJB: I think what I do like about those books, and a lot of the Gecko books, is that Sam will just sit down and read them by himself. And he’ll want me to read them as well, but the illustrations are so interesting. And they go from that really young age, through to things like Snake and Lizard, where you’ll start to read these short chapters, and you know but it’s got a few illustrations… Up to the chapter books.
S

F: A wonderful moment in domestic publishing by Gecko for me was when they published The Travelling Restaurant; I was blown away by the newness of it. Despite the fact it was a trope, it’s done again and again but, the newness of what Barbara had come up with and their ability to recognise it.
SJB: Yeah, they’ve got very good taste, haven’t they?
SF: I guess, like with Mrs. Mo’s Monster, they just picked it up and ran with it.
SJB: I do find these books bring up a lot of conversations.

SF: One book that Dan goes back to and back to, was this one: The Magical Life of Mr Renny. The reason he goes back to it is because he gets it. At the end there’s a joke. He sends a picture to his friend Rose, and Dan was immediately really proud of himself for ‘getting’ it. He’d have just over 3 at the time.

SJB: Yeah, Leo Timmers is – we have Bang! and we’ve got Franky, and a lot of Bang! is just the same joke over and over again. And I like that in Franky, the young boy is so sure that robots live on another planet, and the boy’s right. It’s so affirming, for their world view.
SF: Redemption for kids and how they think.
SJB: Poo Bum and I like Spaghetti are like that as well, the kid gets to say ‘Poo Bum’. The fun of reading Poo Bum is saying it over and over again. 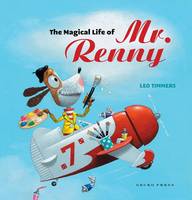 SF: I also love the depth of Mr Renny, because he paints everything his heart desires, and it shows that everything your heart desires is never going to be enough. He gets to the point that he’s got the lot, then he has to paint the person who gave him the power, to get him back, to make himself a painter again. Because he can’t paint without it becoming real. A very clever little philosophical problem.
SJB: They are quite philosophical, aren’t they.
SJB: I think with Gecko, you just always know you’re going to get a good book. I think it’s because its such a small operation as well, the books are so carefully chosen.
SF: Jane had input, but Julia goes to the book fairs and things, and pays money for them – she has very good business nous, coupled with excellent taste.
SJB: You can really see all the love.

SF: When they brought out Toucan Can, by Juliette McIver & Sarah Davis – I like most of what Juliette & Sarah do, but this, for me was like Dr Seuss. I thought, wow – that is so good it’s stunning. I remember writing in a review “I cried a little when I first opened this book.” I think it is her best work, certainly to date – nothing has hit me as hard since. I think there’s something in that. Gecko only take really the cream. They have a very high standard, for what they want their stories to do.

SJB: One of the ones that I really liked – I think I reviewed it for you – was The Lazy Friend.

Yes, the sloth.
SF: A wordless one.
SJB: Having the wordless ones, it’s a real diversity of different types of books. The wordless one was brilliant for making up the different stories that you could make, and talking about the illustrations.
SJB: They do some puzzle books as well, don’t they. We had the dinosaur one of those (Dinosaurs Galore, by Masayuki Sebe), and Sam loved that.

SF: Here’s one I really like – Sheep in Boots. It’s a different take on a sheep and a wolf tale. And I adore Just One More, its a really quirky combination of very short stories, illustrated by Gavin Bishop.
SJB: I got a book by Gavin recently, Bruiser. It really only worked at one level. That’s what I like about the Gecko books, is they work at lots of different levels. They’re funny, and they have ways to talk about difficult emotions. Poo Bum and I want Spaghetti are like that.
SF: Actually, A Deals A Deal, have you got that – from the same series. That ones actually very clever, because they’re trying to do a deal on these cars, he swaps him three cars for his one. The car falls apart because it’s plastic, so he puts it together with boogies and says its treasure inside it so the friend takes it back. That was one of Dan’s favourites for awhile.
SJB: And you get to talk about problems kids encounter every day. I find they are very fun to read, really beautifully produced (even just having this half-flap) and the paper stock just makes it so nice to hold.
SJB: And because they are mostly translated, we are getting these cherry-picked books from all these slightly different cultural takes on the world, which I enjoy. It means that Sam’s not just getting one world view. 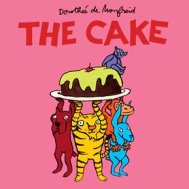 Mean characters, meaningful discussion points and illustrations that tell the story by themselves: all things that you will find in Gecko Press books. Thank you Julia, for starting such a fine little company 10 years ago, and for having the good business sense and excellent taste to grow it to where it is today. May the next ten years be even kinder to you.

Sarah Forster & Sarah Jane Barnett are fans of Gecko Press. One Sarah has a 5 & a 3 year old boy, the other has a 4 year old boy; they all love Gecko Press books, even if they don’t know it quite that specifically yet.

*After this interview, I took Who’s Hiding, by Satoru Onishi home for Alex, thinking it would be a likely hit. One month later, he has memorised it and enjoys asking us who’s hiding and who’s sad. Every Night.

(I will add a list of details for each of the books mentioned here, in the next day or two)