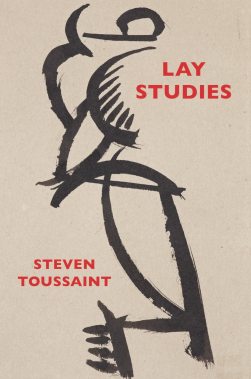 If you judge a book by its cover, then Steven Toussaint’s Lay Studies, due for publication by Victoria University Press this July, is elegant, sophisticated and artistic, with more than a hint of je ne sais quoi. In fact, I actually don’t know what the cover design represents, but the curves of the oriental-like calligraphy and calm background beige clear my mind before I have even opened the first page. The simplistic and tasteful colour scheme with a splash of red indicates that this tidy little book holds deliberate and considered poems.

Lay Studies is a collection of very cerebral poetry. There are references to Pound, Odysseus, St. Francis, with a distinctly biblical feel in places. It is lyrical, and deserves to be enjoyed for the soft and measured flow of the language. If you are searching for the poems’ meanings, then it is not a light read. There is a Notes section at the back. But who can deny the beauty of the lines:

Toussaint’s phrasing has a luxurious fullness. There are ‘tea / and biscuits in the vestibule’ and ‘imaginary saturations / of foliage on the threshold’. In amidst the intellectualism, nature is a definite presence:

Wherever apple boughs
deliver, where thunder
earth with crimson bombs
we are.

Her attention is an accident
of resistance, shattering
her reflection to get

clean, hammering
the water so hard  she might be

forging an object
amid the speculation, fresh

Meanwhile, beautiful descriptions underscore the irony of man’s relationship with the world:

Fish too credulous
answer with a kiss
the jighead’s dancer,
and the long rod dips
with their wounding.

Maybe the most powerful lines in the book for me were within the poem ‘Agnus Dei’, meaning ‘Lamb of God’, conjuring a winter’s herd of sheep. Perhaps echoing Nietzsche, the poem states: ‘I believe in a God who can learn /to work new spindles’. He ends ‘I hope you feel safe when you die’.

Toussaint has already published one collection of poetry and one chapbook. He was born in Chicago, and his publisher states that he has adopted New Zealand as his second home. Toussaint does write himself into the landscape. The first third of the book has a poem titled ‘Mount Eden’, even if in terms of physical features, the poem gives us little to hold onto. Auckland property also makes an appearance.

It seems a funny thing to comment on when reviewing a book of poems, but like the cover, the space on the page is well proportioned and, generally there seems to be a lot of it. Not only in the poems, but in the gaps between lines. As an important consequence, none of these poems feel jammed or rushed; interestingly, in Indian music the time between the beats is called a lay. Lay Studies also has connotations of medieval song and poetics, and religion. All are indicative of the layers of meaning to be unravelled.

A commitment to explore these poems will bring an appreciation of their depth.