I chose this session because it featured a writer called Elizabeth H. I know that sounds odd – narcissistic even – but I’ve discovered many interesting writers (and people generally) just by following the sound of my own name. And, when there are so many interesting-looking sessions to choose from, it seems as good a way as any other to discover something new.

Acknowledging that today is National Poetry Day, Hay and Wake both read some poetry to begin with: George Oppen and Raymond Carver respectively. Hay says she reads poetry first thing most mornings, because it stimulates her writing mind: “Reading something to which you respond loosens the imagination … The best moments in writing are when you’re self-forgetful”. Hay says she’s been reading Ted Hughes’ The Birthday Letters, and that the “raw, fresh, vigorous language” gives her energy. The way Hay figures out what she wants to write, she says, is she lies on the bed and thinks about what matters most to her, and the answer comes.

There was much discussion of politics. At one point Wake wryly asked “How many people in this theatre have seen a picture of our Prime Minister with his shirt off?” Many hands were raised – an audience member commented that in Aotearoa we’re “suffering from a bad case of Prime Minister envy”. 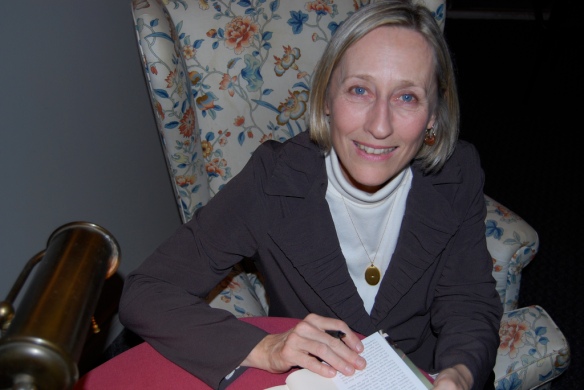 Hay (above) said “I love political stories … You get to see the characters unfold on the big screen. For me, [Canadian Prime Minister] Justin Trudeau is a character in my life … The reason I have time for Justin is the hope that he might become more than he appears to be: it is a novelist’s hope for a character. In narrative, one of most exciting things is when character finds they’re more capable than they thought they were.” Hay observes that it’s very satisfying for humans to observe people getting better at things.

Hay worked as a radio journalist for many years before becoming a professional writer. In 2007, she won the prestigious Giller Prize. Hay says: “It gave me a bigger readership and such a wonderful holiday from envy for a whole year … although by the end of the year I’d developed a serious allergy to myself, and had to employ my favourite word in the English language, which is ‘no’.” On the topic of literary awards generally, Hay said “All writers and all publishers need to be vaccinated against the awards season”.

It was interesting to hear Hay speak about being a Canadian writer writing both in and about Canada, especially in the context of the discussions we often have about the nature, place and fate of New Zealand writing. Hay says she regrets not having managed to convince her children that Canada is an interesting place to spend their lives (although her daughter does now live in Canada). She spoke about the resistance she gets from her publishers for writing specifically Canadian books: “I think Canadians are more interested in reading Canadian stories than publishers realise … In Canada, people appreciate books that give them their country.”

Hay had a quiet but warm presence, and there was a rush at the end of the session to buy her book and join the long signing queue. Hearing her read from her book was a real treat. Onwards to the rest of WORD Christchurch!