“What’s this book about Dot?”

“Boys do amazing fantastic things too!”

“Of course they do. But there are lots of books about them already!”

This introduction from the ‘narrators’ says it all really: this is a collection of over 70 amazing fantastic girls who have inspired and help shape our world, from Cleopatra: Queen of Egypt, to Malala Yousafzai: women’s rights activist.

Presented in an engaging comic strip format, each featured woman’s story is told in manageable bites across a double page spread, using fun and witty dialogue to keep the information interesting for younger readers, similar to the popular Horrible Histories series. Additional information features in the margins and the narrators keep up the banter throughout the book.

The range of women selected (and the author acknowledges who hard it was to select only a few from the thousands of inspirational and amazing women there are) features well-known names such as Jane Austen, Anne Frank, Eleanor Roosevelt, Queen Elizabeth I, and Marie Curie. It has to be said that these well-known names are predominantly European, and this predominance is somewhat offset with the inclusion of other famous names such as Cleopatra, Cathy Freeman (Aboriginal Olympic gold medallist), Malala Yousfazai, Mae C Jemison (first African-American Woman in space), Wangari Maathai (Kenyan Peace Activist and Environmentalist).

It is the diverse range of accomplishments represented is wonderful to see – there are queens, sportswomen, creators, scientists and activists. Shared by all the women is a passion and belief in their worth and it is this important message that is there for all readers to see. Girls really can to anything they set their minds to.

The last three double spreads feature introductions to even more amazing women, with both familiar and new names featuring in a roll call of honour. It would have been great to see them have their own bigger spreads, but then the book would have ended up way too big to pick up! Perhaps the publishers could create a Three Cheers for Women – Vol 2?

As a highly readable non-fiction title, this will be a valuable resource for any primary or intermediate school library which can be used as a base for research projects or discussions about gender equality.

With the words of wisdom included and the stories of achievement and desire to help their communities, I sincerely hope it inspires both young girls and boys to find their own passions and way to make the world a better place for everyone – no matter who they are. 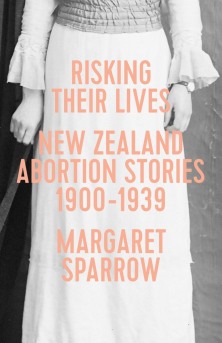 Dame Margaret Sparrow, since qualifying as a doctor in the 1960s, has played a significant role in promoting the availability of reproductive health services in New Zealand. She openly states that it was thanks to her own ability to access contraceptives, and on one occasion a mail-order abortion drug, that she finished medical school at all. A prominent member of groups including Family Planning and the Abortion Law Reform Association of New Zealand, she still makes appearances at pro-choice protests. Recently named Public Health Association champion for 2017, Dame Margaret has been speaking at various events recently, continuing to promote her causes and occasionally startling younger women with frank discussions about masturbation.

She has lent her collection of historical contraceptive devices to be exhibited at Te Papa. She displays a golden speculum-shaped trophy in her living room. In short, Dame Margaret Sparrow is a bloody legend.

Risking their Lives is the third in a series recording abortion history in New Zealand. The earlier books covered the periods 1940 to 1980, and the 1800s. Compiled from coroner’s reports, newspaper reports and some biographical information about key figures who instigated change, the book intersperses historical context with the sad stories of many women whose circumstances led to their deaths from abortion-related causes. This book covers the section of time in between the previous two, during which increasing awareness of deaths from septic abortions led to changing political priorities about women’s health. Eventually.

As shown in the book, women who were pregnant and did not want to be were really between a rock and a hard place: strong social disapproval of childbearing out of wedlock led people to desperate remedies that could kill them. Married couples also feature in these stories; some women who died from abortions already had young children and felt they could not afford another.

Unsurprisingly, this is pretty grim reading. Margaret Sparrow acknowledged as much at the book launch, thanking Victoria University Press for committing to publishing her work despite knowing that abortion death is hardly bestseller material. As she read out one of the narratives, in which a woman on her deathbed was being quizzed by police about which drugs she and her friend might have procured, I suddenly remembered the words on a painting about illegal abortion from 1978: This woman died, I care. This, I thought, must be part of the purpose: to tell the stories of these 90-odd women, who didn’t need to die like that. To show, however belatedly, that someone cares.

After a setting out of historical context, the book divides its stories by the themes of medical causes of death, contraception, the law, then the professions of people most commonly caught up in abortion-related trials and scandals (doctors, nurses, chemists and others). I eventually found this layout slightly confusing, as with each new chapter the stories would start back in the early 1900s and progress on to the late 1930s. Given the evolution of social and medical perspectives being shown throughout the book, I might have found it easier to follow a more strictly chronological arrangement.

The chapter on contraception provided a surprise highlight. Following discussions of contraceptives in the media of the day (disapproving editorials on the one hand, euphemistic newspaper advertisements for “remedies” on the other) the chapter goes on to describe and contrast three pioneering women in the field of birth control: Marie Stopes in the UK, Margaret Sanger in the USA and Ettie Rout in New Zealand. They come across as fascinating characters: they knew each other and had at various times collaborated then strongly disagreed. They all seemed, in their own way, to be rather eccentric. But given the strength of conviction needed to keep pushing their work through, against prevailing social norms, a touch of unconventionality might have been helpful.

The most obvious audience for this book might be students of social and medical history. The book is however a stark reminder to any reader about how far we have come, and how far we have yet to go. It certainly made me grateful to be living with a female reproductive system now rather than 100 years ago. Abortion back then was dangerous, certainly, but naturally-occurring miscarriages could also kill women, and childbirth carried far more risks before modern medicine cut down the rates of fatal infections.

Reading these women’s stories may be an act of bearing witness: This woman died, I care. But we are also reminded that for any progress to be made, people like Margaret Sparrow needed to care. As she notes in her epilogue, we still have abortion in the crimes act, and while so much has improved for women’s health, there are still barriers. The connections between these kinds of stories and the present day need to be heard, because people need to keep on caring enough to keep pushing for change.