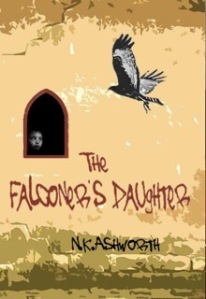 Fourteen-year-old Maddie Prescott is beginning to suspect that the medallion her mother
left to her possesses magical powers. It’s easy to believe considering the other curiosities Maddie has recently discovered; there’s the injured falcon she takes under her wing (if you’ll excuse the pun) and the Tower her mother built before Maddie was born. Most mysterious of all is the unfinished book trilogy that Maddie’s mother had written before the accident that killed her many years ago. The main character, Skyla Hawke, seems to have a lot in common with Maddie — perhaps too much in common for it to be a coincidence.

Maddie begins to read the incomplete book manuscript; meanwhile, she and her best friend Jess begin to investigate both the mystery of the medallion and the death of Maddie’s mother. Maddie’s father seems to be keeping secrets from her, and as the truth becomes clearer, Maddie begins to wonder if she really knew her mother at all. Gradually the line between fantasy and reality is blurred as the Skyla Hawke books start to closely resemble elements of Maddie’s life.

When Maddie discovers that two mysterious visitors to the Tower are in fact two of her own separate personalities, Lexie and Alex, it’s revealed that she has Dissociative Identity Disorder. DID is a mental disorder that is rarely referenced in YA literature at all; this book raises awareness about the disorder while careful not to turn the story into a lecture.

The Falconer’s Daughter is an imaginative story about falcons, magic and the slow process of beginning to heal. It’s a short but powerful read, perfect for the remainder of the school holidays.

The opinions on this blog are those of individual blog contributors and not necessarily those of Booksellers New Zealand.
nina in the kitchen