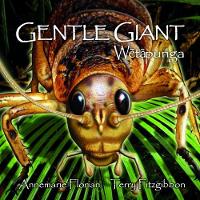 This non-fiction meets poetic story about New Zealand’s largest insect is an amazing insight into the history and life of a wētā. It begins with some intriguing facts about the enormous size of wētā and how it came to make its home in Aotearoa before exploring its breeding, eating and survival habits, and taking a look at how human activity and the introduction of mammals has affected its way of life.

Young children are curious about the living world and seem to have endless questions about the many creatures that inhabit the earth. Annemarie Florian has created an amazing source of reference for children and adults with this book and it is clear that a lot of research and passion about New Zealand’s creatures has gone into Gentle Giant. The poetic narrative paired with the rich illustrations makes it a versatile teaching tool as it can be used as a story book as well as in-depth research tool.

If you were a fan of Florian’s award winning book KIWI: the real story or you have a young class or little explorer of your own who is curious about the wētā, you need to get your hands on a copy of Gentle Giant: Wētāpunga.

Fearless Fred is a story about a boy and his dog and his best friend Harry.

The rain was falling and the creeks were all in flood. Fred was keen to get outside and squiggle in the mud. The drain pipes were struggling to cope so made funny noises. Splat, splot, gurgle wurgle the drain pipes sang. The ducks were chasing puddles. The chook house though was under threat from sludge that formed after all the rain. Charming with her chicks were looking frantic at the slowly rising tide, so Fred in his pirate costume rescues her babies, with Harry carrying Charming on his head.

I’ve read this lovely book to little Quinn who is nearly 2 years old a couple of times. She loved the sounds of the mud and the water in the drain pipes. “Splat, splot, gurgle wurgle” are wonderful words that drip off the tongue and great to introduce to a toddler still learning to talk. This book is written in rhyming text with wonderful illustrations by Terry Fitzgibbon.

Jill Eggleton is a New Zealand author of over 850 titles, with her books being found in schools all over the world. Terry Fitzgibbon is a New Zealander who has illustrated for other authors as well as his own books.

This is a story about Bubba Kanga and how he gets bounced out of his mother’s pouch. When Bubba Kanga tries to find his mother, he comes across Snake. Snake tries to convince Bubba that she could be his mother. Bubba Kanga is not totally convinced, but Snake perserves. The birds in the tree try and warn Bubba Kanga that he is pursuing a very dangerous course of action.

I read this story to my 4-year-old granddaughter Abby. She was totally absorbed with the story with questions every now and then thrown in. The reader needs to use their imagination with trying different voices and it really doesn’t matter if the singing parts are out of tune. Small children don’t seem to notice these things too much.

Sneaky Snake is a lovely story with lots of beautiful illustrations throughout. This book also comes with a CD, which is a great addition.

Any success with books has to come from how many times a small person gets you to read a story. Abby got me to read this book twice and when we got organised with a CD player that also had to be played twice. So in all I would say reading this book to this 4-year-old was a resounding success. This is high praise for any book, in my opinion.