Tara Black spun her magic with words and illustrations on Saturday, 10 November at LitCrawl, checking out Starling: Meet The Residents, then going on to the Bad Diaries Salon. 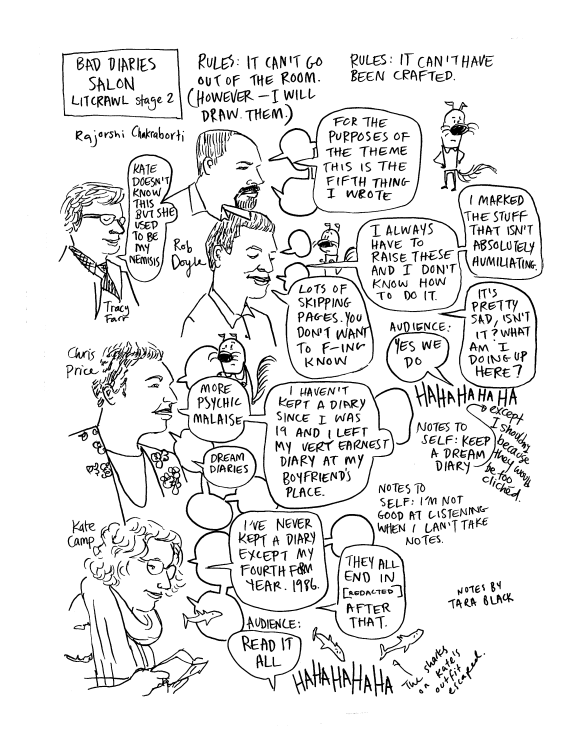 Tara has covered the Bad Diaries Salon without details, as requested by the rules of the event. I like the way she has given the background of invisible notes. I also like the escaping sharks.

All notes and illustrations were done by Tara Black, and all rights to use the images are reserved. Please check out Tara’s website if you’d like to communicate with her.

Tara Black spun her magic with words and illustrations on Saturday, 10 November at LitCrawl Extended. Here are the sessions she covered, with a small note from Sarah about the KidsCrawl, which she also attended! 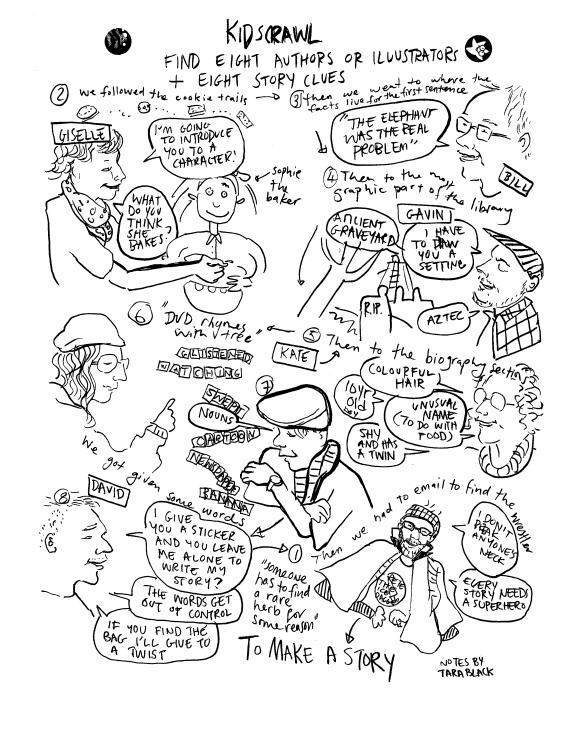 Notes from Sarah: KidsCrawl featured Bill Manhire, David Larsen, Giselle Clarkson, Michael Petherington, Susan Paris, Kate De Goldi, Gavin Mouldey, Kate Camp and Iona McNaughton. I attended with my 8-year-old and his friend Zach, and it was a lot of madcap fun. The elements of a story were presented in an exciting way, with cool words made of Scrabble tiles, a very awesome character set up by Kate Camp and her helper, and Giselle’s drawing of another key character. I was a bit starstruck when we reached Bill Manhire, but none of the kids knew who he was. We ended up with Gavin Mouldey who helped us write a story with a temple, some glistening brows & a carton with a rare herb in it. It was hilarious, and inventive, and creative. Please do it again, LitCrawl!

More information on Zoya Patel can be found here, and you can purchase her books from VicBooks, the sponsoring bookshop for the ‘Crawl. Kiran Dass is a bookseller and reviewer, and co-hosts the podcast Papercuts. 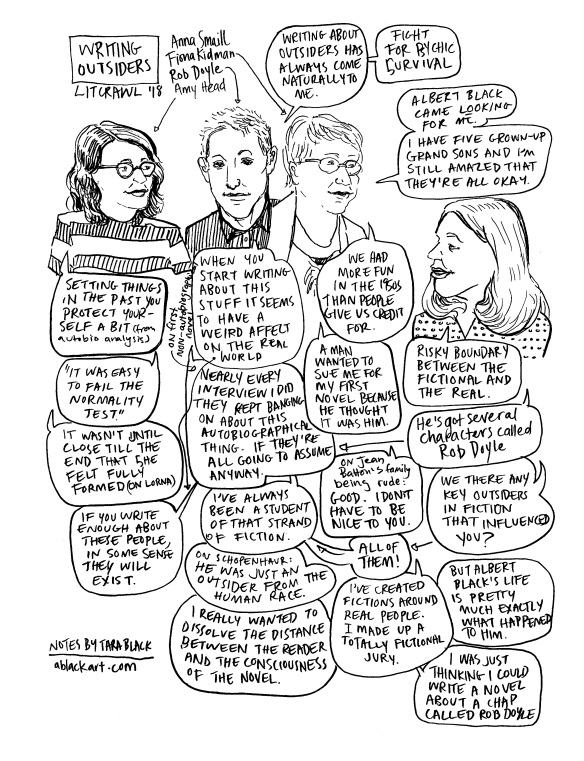 Riki Gooch, Danyl McLauchlan, Kirsten McDougall and Anthony Byrt are all published in Headlands: New Stories of Anxiety, released last month through VUP, and edited by Naomi Arnold, who chaired this session. The book is available from all good bookshops.

All notes and illustrations were done by Tara Black, and all rights to use the images are reserved. Please check out Tara’s website if you’d like to communicate with her.

Tara Black recorded this at the Manawatu Writers’ Festival this past weekend. Copyright Tara Black, all rights reserved. 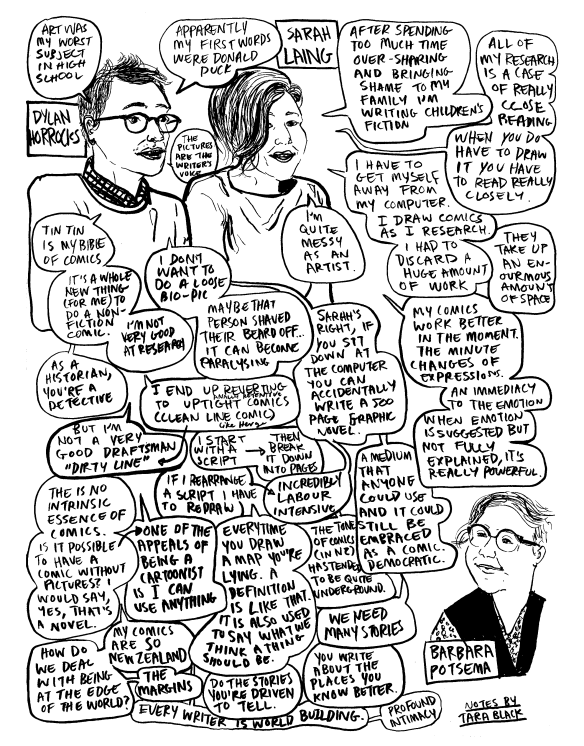 Please check out Tara’s other work on her website.

Tara Black reviews Charlie Jane Anders – Beautiful Fantasy, and below that – Elizabeth Heritage also reviews it, with lots more words! They both did beautifully!

A small but devoted crowd turned out this morning in the festival tent to hear Christchurch spec fic writer AJ Fitzwater interview Charlie Jane Anders. Anders is a transgender speculative fiction writer and organiser from the US: ‘willing to be a bad influence for a good cause’. It was very pleasing to see two women on stage each with pink hair (I may be a little biased).

Negotiating stereotypes and tropes is a topic that often comes up in conversations about spec fic, and that’s where we started. Anders talked about how the stereotype is that science fiction is masculine, and fantasy is feminine. Often a fantasy character will say to a sci fi character, “this is something you can’t possibly understand” – ‘for a man to say that to a woman just bugs the hell out of me’. In Anders’ novel All the Birds in the Sky, Laurence, the male character who is a computer scientist, ‘cries early and often’. He’s less sexist than many techy guys and ‘that made me like him more – and I really wanted to like him.’

All the Birds in the Sky follows the two central characters from when they are children. Anders said she wanted to honour that teens are often more introspective and noodly than adults. ‘I was much more articulate at the age of 13 than I am now. I talked like a college professor because my parents were college professors. 13 was the age that nearly wiped me off the face of the earth.’

Anders was learning disabled as a child: ‘I couldn’t make words on paper’. She was helped by a teaching assistant with whom she is still friends. https://www.buzzfeed.com/charliejane/how-being-a-special-ed-student-turned-me-into-a-lifelong-wri?utm_term=.wsgWWE3rRB#.kjrJJlDyBZ She said if she writes disabled characters she will always take care to do so mindfully.

Anders and Fitzwater had a great rapport on stage, which always makes a difference: at one point Anders commented ‘these are the best questions ever!’ One of her questions was in relation to the late, great Ursula K. Le Guin – what do we owe Le Guin to do now?

Anders said her next novel that comes out in January 2019 is Le Guin fan-fiction, and she’s sad she’ll never get to show it to her. What we owe Le Guin to do now is to approach gender in books mindfully, and to think about the ways in which societies are not just mechanistic. Cultures are made up of more than just what’s on the surface: historical accidents, folklore, deep history.

Fitzwater asked about Anders’ short story “Don’t Press Charges and I Won’t Sue”, a terrifying dystopian tale of forced de-transition. Anders said: ‘I tweeted out a trigger warning for that story, which I don’t usually do. The story came out of just sheer terror. I wrote it around the time of the [US presidential] inauguration, and I was freaking out. You could already see the wave coming.’ It was published in the Boston Review. Anders said she wanted to get that story into a fancy literary magazine because she wanted nice, well-meaning cis-gender people to face the terror of violent transphobia and have a moment of sitting with that.

‘I wanted to grab cis people by the lapels and make them listen to my fear.’ Trans people are not ‘some monstrous creature from your id coming into your bathroom scaring your kids’. She has had feedback from readers that it has been opening some people’s minds.

Discussion turned to the theme of climate change. Anders said: ‘If you’re writing about the future and you’re not including climate change then you’re shirking your duty.’ She said you have to face up to the scale of the problem without getting defeatist.

‘Environmentalism can get a bit puritanical, like humans are just bad.’ But that isn’t helpful: you need to focus on solutions. ‘How the hell are we going to get rid of cars and bitcoin?’ She recommended that spec fic writers talk to scientists to help get it right.

The City in the Middle of the Night, the sequel to All the Birds in the Sky, comes out in January 2019.

Charlie Jane Anders’s is the author of fantasy novel All the Birds in the Sky.

Cory Doctorow, co-edits online directory BoingBoing, and his most recent novel is Walkaway.

Indonesian author Intan Paramaditha is launching her first English translation of short stories, Apple and Knife, at Writers and Readers.

Darusha Wehm is the author of Beautiful Red, Children of Arkadia and the Andersson Dexter cyberpunk detective series. 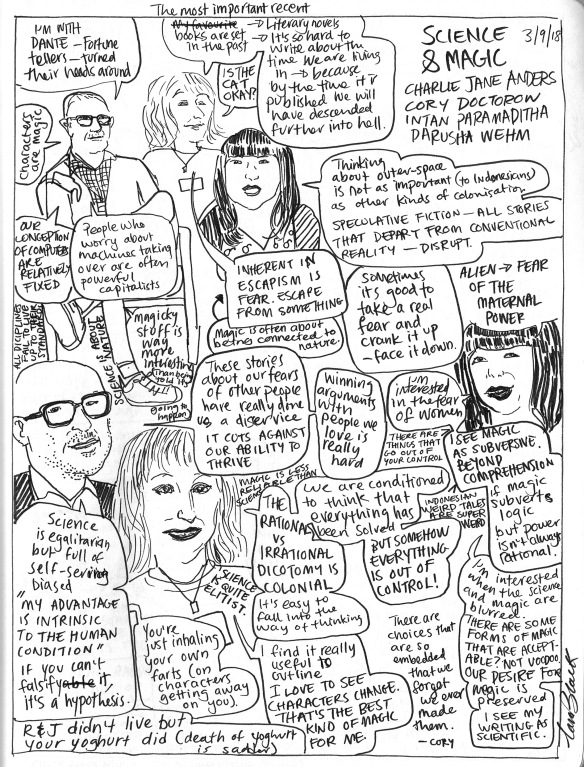 Reviewed in illustration by Tara Black, all rights reserved.

Pip Adam, Dominic Hoey and Xue Yiwei  talk of the inspiration of place, and the ways in which location gives vital realism and urgency to their stories, in conversation with Julie Hill.

Illustrated notes below, by Tara Black 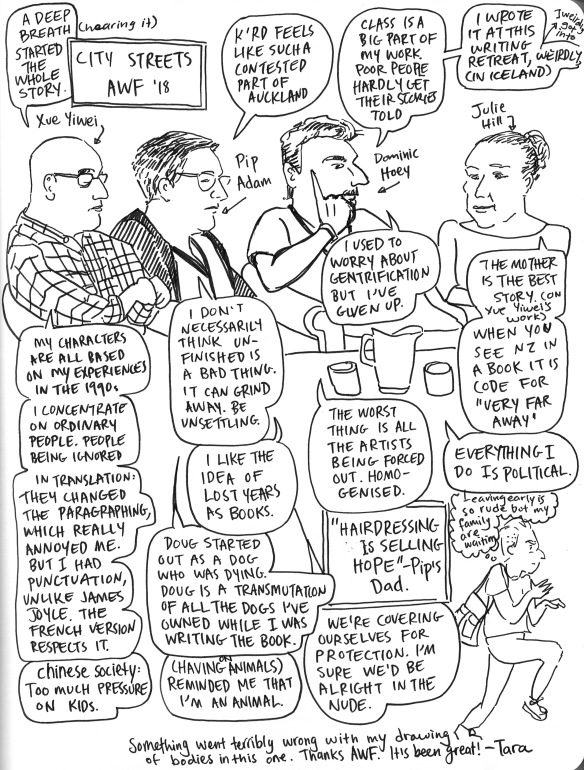 Check out ALL of Tara Black’s coverage of the 2018 Auckland Writers Festival here.

‘In memory of the extraordinary Ursula Le Guin, writers and fans Karen Joy Fowler and Elizabeth Knox join David Larsen to share stories of their first encounters with her work and explore the legacy of the writer David Mitchell describes as a “crafter of fierce, focused, fertile dreams”.’