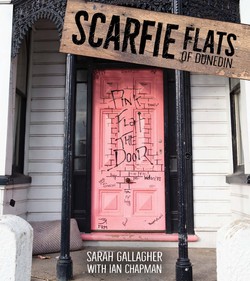 Just mention the words ‘Toad hall, ‘The Dog Box’, Footrot Flats’ or ‘Shrieking Shack’ to anyone who has studied at Otago University and these legendary flats will trigger a hilarious yarn or two of escapades during their scarfie days.

In 2000, while studying at the University, Sarah Gallagher was preparing a presentation on the theme of ephemera, and felt the signs on flats she walked among everyday were just what she was looking for. Scarfie Flats of Dunedin is a result of the eighteen year research project, ‘into the flats, their tenants and their tales’. Gallagher collected more than 600 names, the earliest dating back to the 1930’s , and these have been recorded in the rear of the book, as well as a map of the area noting the locality of all the featured flats.

Having been a student in Dunedin in the mid 1960’s I was intrigued by this title and keen to delve into the student sector of the city again. Many flats seem to be the same as when I left. Of course I have continued my connection with having two daughters study there and now my first granddaughter has recently graduated as a doctor, so we have seen some changes, but more likely just a coat of paint.

This hardback book has sat on my coffee table for a month and I have enjoyed the nostalgic journey with Sarah Gallagher as she learned how the flats got their names and who might have lived in them.

Interesting to see the TV Ones Seven Sharp programme visit one such flat recently, 660 Castle street, where the band Six60 had its beginnings in 2006. The boys had spent time jamming in their rooms at UniCol and ‘thought it would be good to flat together and get a band going’.

Other contributors have also added their point of view along with Dr Ian Chapman and the photographs brought it all together for me. Our family has pored over these with many a laugh and story.

Scarfie Flats will be enjoyed by many ages, as it is an engaging read, and well researched, a valuable record for Otago University but would sit well on everyone’s coffee table.