There are a lot of books about country singer Johnny Cash. He even wrote two autobiographies. But this monumental book of 680 pages adds much, explains much, and raises questions. Hilburn writes what Johnny’s daughter Rosanne calls the “unvarnished truth” about a flawed musical icon whose career stretched from the fifties to the noughties, and covers it all, in detail and in depth. 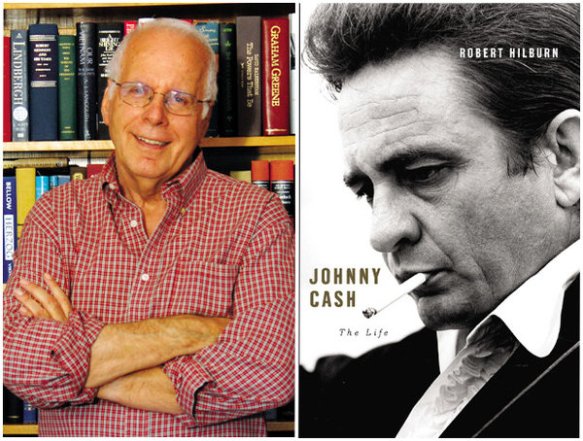 Cash had four early influences which were with him all his life: his disapproving father Ray, his sympathetic mother Carrie, his religion, and his birth into a world of poverty and hard work. He overcame great difficulties to become one of the twentieth century’s most important musical figures. Not a smash hit of course; he took a long time to get established. But then addiction to amphetamines, and overexposure, saw his bright light fade. But later in his life, due to his new producer Rick Rubin, and his second wife June Carter, he reached stardom a second time, only to fall again, then to rise again. Not so much a career path as a pendulum!

His legacy is a mixed bag. The albums range from the sublime to the mediocre. The reasons are clear: he was at times unreliable, unable to cope, self-contradictory and suffering from guilt. And at other times he was driven to greatness by his passions for the downtrodden, the poor, his religion, and above all for music.

This biography captures these rises and falls with a brutal honesty that has not always been found in biographies of Cash, and certainly not in his own writings. Indeed, there are many places in this book where stories are told and details are given to correct the autobiographies, because “Johnny never let facts get in the way of a good story”.

The book is written chronologically, but is not just a diary, as some recent musical biographies have been. It includes a great deal of background on the music industry and other influential performers, most notably June Carter and the Carter Family.

This is a rich book too, in that it anchors Cash’s story firmly in time and place. This is not just a biography of Johnny Cash but of what Hilburn calls the “tawdry melodrama” of country music, and of the music industry generally over the years. There is a mass of detail here, but this use of detail does not bog the narrative down but rather it moves the story along, sets the scene, and puts the reader in the place and time that events occupied to help understand why some things happened as they did. The business side of music making is well described, although it is hard to like.

Hilburn was pop music critic and editor for the Los Angeles Times for more than thirty years. He interviewed Cash several times and knew him well, and since Cash died in 2003 Hilburn has had privileged access to Cash’s family and many of those who worked with him over the years. This has given him an unrivalled body of source material. This he has organised skilfully and sympathetically. His writing sparkles. He has included a useful guide to the recordings and DVDs for those who wish to explore Cash’s legacy, and notes of his sources.

A book that doesn’t raise questions isn’t worth reading. The dilemma for a biographer is that the primary reason for an artist’s fame is his output – patchy in this case, but reaching great heights at times. Does it matter that he is also a drug addict, a poor father (until late in life), a devout Christian, a serial adulterer, a generous man and an occasional financial cheat? Frankly, he behaved badly and was a hypocrite. He couldn’t help himself. Hiburn does not resile from this issue, and sheds light on many of the less reputable aspects of Cash’s behaviour. He does not judge: the reader is left to make their own judgement about Cash the man; history has already judged Cash the musician.

Lou Robin, who was Cash’s manager for more than twenty-five years, told Hilburn that “only about twenty percent” of the Johnny Cash story had been told. This big book goes a long way to telling the other eighty percent, in a comprehensive, stylish way.