Jill Eggleton’s name will be familiar to many teachers. A writer and researcher of early literacy, she is highly regarded by many for her expertise. In this slim volume of “ridiculous rhymes”, Eggleton gifts parents and teachers with fun, fairly short rhyming poems that will be enjoyed by young readers.

They rhymes are whimsical in nature, from a too-cool-for-school monkey to a king suffering from bubble trouble. The illustrations are lively and will definitely add to young readers’ delight in the poems.

Playing with language such as rhyming words is an important way for children to develop their early literacy skills. Books like Duck Feet are a great way to introduce children to the fun that can be had experimenting with rhyme and rhythm. A CD of the poems being read with helpful chimes to tell the reader when to turn the page, is included with the book.

I shared this book with the other new entrant teachers at my school within minutes of opening it. It is perfect for our “poem of the week”, which we share with children daily over the course of a week, so they can move from listeners to joiners/readers as they develop familiarity. I was just as excited to share the book with a class of 5 and 6 year olds. The children particularly enjoyed the poems ‘Clever Monkey’ and ‘Egg on My Be’ when I shared the book with them, and ‘Popcorn’ elicited lots of comments about home experiences with popcorn. ‘Growing’, a lament from a child about how slowly s/he grows, will strike a chord with many parents and educators who know children who just want to be bigger.

Perfect to be shared with very young children to 5-6 year olds, I recommend Duck Feet for anyone who enjoys having a chuckle with small people. The kids won’t even realise that they’re learning.

This is a charming delight of a picture book. It is the third featuring Marmaduke Duck, written by Juliette MacIver and illustrated by Sarah Davis, and by far the most 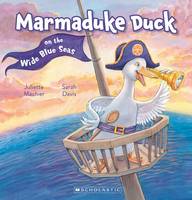 compelling and adventurous of the three (and my favourite − it has monkeys in it!). For those unfamiliar with the series, Marmaduke Duck makes marmalade jam, which is well loved by his animal friends, then (in the second book) Bernadette Bear moves in and sets up a honey store in direct competition with him. There is some rivalry, but the two eventually become friends and combine their talents to make a one stop sweet shop.

In this third book, Marmaduke Duck has become restless with his cosy life, and decides to set off on a grand adventure − exchanging a cart filled with jam for a sailing ship, and heading off with a ragtag crew to sail the seas. All is going well until the ship runs afoul of the Marmoset Monkeys and Orangutan Fang.

The whimsical illustrations are a delight and combine with the words to create a truly enchanting picture book. From the soft pastels of the cover − where Marmaduke stands atop his crow’s nest, telescope in hand and stirring spoon in his belt − and throughout the narrative, the characters come to life. This is one tale in which the illustrations go above and beyond the narrative, and we can watch as Bernadette − a home sort of bear − leaves the comfort of her house to follow her friend into the unknown − and turn up in just the nick of time to save his feathery hide. Sarah Davis creates all her characters with loving care, including the individual marmosets (there is even a credit at the back to her “Monkey Pirate Fashion Consultant”) who all have their own unique traits. I especially love the facial expressions of Orangutan Fang and the fact that Bernadette Bear is a very realistic sort of bear (especially when angered) – despite her apron, hand bag and little bow.

The prose too is a delight to read. Juliette MacIver writes in rhyme − a hard technique to master − almost flawlessly, creating an animated and lively tale to read aloud. There is a delightful playfulness to the rhythm. Coupled with the illustrations, this is one picture book that can stand reading time and time again, with extra time spend to study the second story − the one told in illustrations alone. This is a story of courage and friendship, of the power of jam and home comforts over the allure of gold. I hope to see more of this loveable, unlikely duo, now that they’ve both had a taste of adventure, let’s hope it leads to more!

This book is available in bookstores nationwide.

This book was a huge hit with my class of five year olds.  It has the key ingredients for success – lovely big illustrations, lots of language play, and lots and lots of dogs!

A breed of dog is introduced for each letter – from Affenpinscher to Zuchon – with a “ditty” to describe the traits of the dog. The ditties come in a variety of styles, from limericks to rhyming couplets, and a variety of rhyme schemes. The variations add interest, and are make the book perfect for dipping into to read a few poems here and there.

The illustrations are good humoured and fun, and Lawford captures the “personalities” of the dogs van Dam is describing beautifully.  My class were excited when they could identify with the letters, giving lots of other examples of words that start with “n”, for example. They were laughing out loud at some of the scrapes the dogs got into (using the word nude is always going to send five year olds into fits of giggles, let’s be honest!), and we all learned about breeds of dog that were new to us.

When my daughter was still of an age to want bed time stories, we used to have an agreement of one story and three poems. This is the sort of book that would have been great for our bed time routine; there is a lot of variety in the poems, and they’re all quite short, which keeps the rhyming schemes fresh and snappy.

I enthusiastically recommend this book for pre-schoolers to about seven year olds. It’s a lovely book to read to aloud, and while some of the names of breeds are tongue-twisters – such as Xoloitzcuintil! – independent readers will enjoy practising their rhyming skills while reading to themselves.

Doggy Ditties from A to Z
written by Jo van Dam, illustrated by Myles Lawford
Published by Scholastic NZ
ISBN 9781775431886