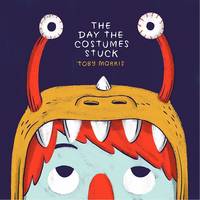 Iggy leaves a costume party with his Mum, but something weird happens. He can’t take his costume off. Mum and Dad don’t believe him, and it looks like he might be stuck as the Boogie Monster forever. Iggy decides to investigate and wanders down a figurative rabbit hole. The other kids are stuck in their costumes too – but they don’t seem to realise it. What on earth is going on?

Toby Morris is an Auckland-based illustrator and writer, most familiar to me for his political cartoons for The Wireless.

The Day The Costumes Stuck is a whimsical picture book, with a non-traditional story arc. More like an independent art house movie than a Hollywood block-buster, the ending is open-ended and not at all what the reader might expect. This allows your own imagination to keep the story going on your own terms. The illustrations are wonderful, with a limited colour palette. The children are in colour, and everything around them is grey. The faces of the characters are really expressive, and convey beautifully the adult situation that each child has found themselves in.

I read this to my class of 5- and 6-year-olds, who had plenty to say about the book. There was debate over whether costumes could really get stuck, which transformed into a conversation about what they would do in Iggy’s situation, and what sort of costume would be fun or awful to be stuck in. Any book that promotes conversation amongst children is all right by me – recommended for up 8 year olds.

There are of course many books, both short and long, on climate change. This one is particularly focussed on New Zealand and the South Pacific: what could the future look like for this region?

This is one of the BWB Texts, which are billed as “short books on big subjects”. It’s certainly a short book, and there are few subjects bigger than climate change.

Meduna has found a surprising number of studies on aspects of climate change within New Zealand and Antarctic and charts their effects on our flora, fauna, ocean levels and the projected impact of these changes on the way that we live. There’s no wild predictions: just careful analysis of where we are, how we got here, and what our future path looks like.

Many children already born will see the year 2100, and that is the time-span that is broadly dealt with. The author has found many scientists working in the areas of climate change, geography, palaeontology and related fields, and brings their findings about the past and present, and more importantly their projections for the rest of this century, to a wider audience.

The book has nine chapters, and most begin with a simple, particular observation – such as a very wet June causing flooding in many part of NZ – and use of the underlying science work to explain a wider phenomenon – in this case the El Niño climate event and its effect on the oceans. And of course, what affects the oceans affects all of us. This moving from the particular to the general is a feature of the writing, and roots the narrative in the concrete, leading the reader to more abstract thinking in gentle steps. This technique is just right in this situation, and I am sure that the author would be a gifted teacher.

Some of the predicted changes are horrific such as flooding of coastal regions. Some are less so: kiwifruit orchards in Canterbury anyone? The author does not dramatise but bases her predictions on what we see now and can model for the future. I say “her predictions”, but they aren’t hers alone: the scientists involved are named, and their experiments and theoretical work described.

In a book this size it obviously isn’t possible to discuss all the possible variations thrown up by the climate models, and it isn’t possible to discuss the experimental data in depth. But this does not detract from the book’s usefulness as an introduction to, and summary of, the science. Thankfully, the book is free of rhetoric, is always rational and unruffled even when describing we have damaged the world possibly beyond repair, and is carefully based on good science. Political issues are avoided.

There are no tables, figures or graphs – I did want a map of Antarctica at one point.
Veronika Meduna initially trained as a scientist, and now works as a science broadcaster and journalist. She is one of the best communicators of science that this country has. She has managed to condense a wealth of information into the book’s 89 pages, and include suggestions for further reading for those interested in more depth in some of the matters discussed. The writing is clear, engaging and yet precise.

There are many of these BWB texts, released in electronic and print form. I hope that they are all as good as this one. If you do not already have a good grasp of the science behind climate change, read it immediately.

Towards a Warmer World: What Climate Change Will Mean for New Zealand’s Future
by Veronika Meduna
Published by Bridget Williams Books
ISBN 9780908321735

This is a digest of our Twitter feed (now with a new title) that we email out most Mondays, Tuesdays and Wednesdays. Sign up here for free if you’d like it emailed to you.

Book reviews
A (love) letter to Margaret Mahy on the re-publication of Dashing Dog, from @sarahjbarnett

Bernadette Hall talks to Poetry Shelf: All I know is that I’m more in love with poetry, whatever it is, than ever

A zombie walk to launch a book… this has got to be good The launch of Blue, by Brandy Wehinger

I enjoyed this article in the Sunday mag – The Life and Love of Murray Ball, by his wife Pam

Congratulations to Lloyd Jones and Dawn Sanders, as well as others, for their nominations for Welly awards.

From around the internet
The Thirtysomething Teen: Adult YA addict @thisisjendoll comes clean.

“Don’t be nervous. Work calmly, joyously, recklessly on whatever is in hand.” Henry Miller’s Commandments of Writing

As a fan of lists of things, which I don’t often follow up, I love this post -You Must Read It