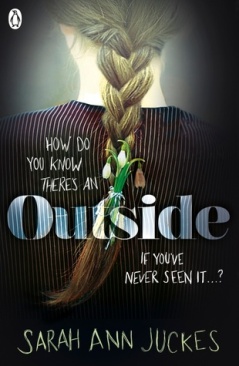 How do you know there’s an Outside if you’ve never seen it?

Sarah Ann Juckes’ haunting debut novel was twelve years in the making and I can see why as you become deeply immersed in this scary world encapsulated within the walls of a well-planned and written novel.

Outside is the story of Ele. We meet Ele inside her tower. Just like Rapunzel, Ele has been trapped and living ‘Inside’ for almost as long as she can remember, only she doesn’t have a window to escape from, even if her handsome prince from the fairytale were to come rescue her. Is there an Outside? From the few books Ele has read, she thinks there is but the ‘Others’ trapped with her don’t agree. Inside Ele shares her world with Cow, Queenie, Bee and through the taps next door from Jack. Ele is determined to find proof that there is an Outside, after all, her brother Zeb used to say that there was one when he was alive. There’s one big problem: Him. To find this Outside, Ele has to get past Him to escape. Zeb was unsuccessful in his own attempt to do so, Ele has the stain of his blood on the floor as proof of that.

To say that this book is hard to review is an understatement. It isn’t because it isn’t any good, quite the opposite, this work is seriously a literary masterpiece. Outside is hard to review because having completed this fast-paced page-turner, I know the ending. I am  scared that I could give too much away and ruin what is an amazing and thought-provoking read.

Imagine being an alien in your own country, to have never seen the outside of the room you live in? How would you imagine the Outside to look like? I can tell that the author has spent many many painstaking hours working through this scenario. What would Outside food taste like? What would grass feel like under your feet?

Outside is the journey of one young girl’s escape from Inside to Outside and all the obstacles she has to overcome along the way. From the very first page you feel as if you are Ele yourself, experiencing the world through her senses. You are engulfed in Ele’s world and it’s language. I haven’t read a book that has engulfed me in an otherworld so much since I first read The Handmaid’s Tale by Margaret Atwood back in the late 1980s. Pretty impressive, considering that for years Ms Atwood’s book itself has been rated in my top ten books of all time. Juckes’ manipulation of language to convey what we consider everyday items through the eyes of a human devoid of human society is an example of this amazing otherworld construction and life-observation: ‘extra-skins’ for ‘clothes’, ‘sun bars’ for lights, etcetera.

This otherworld exploration isn’t pleasant, it isn’t meant to be, but it is so satisfyingly thought-provoking and clever. All I have left to say is ‘reading is believing’. You have to read it, and once you’ve read it, you’ll know exactly what I mean by understatement and clever. I look forward to Sarah Ann Juckes next work!