There are wonderful variations in the way we tell our stories, seen even in the smallest parcels of language. In Turkey, there are over two million forms of each verb – each word-form a complex interplay containing not only tense but the subject, object and indirect objects of the aforementioned verb. Walpiri, an Australian aboriginal language, can be scrambled: you can shuffle the words and it does not change the meaning.

How does this work then? Is it first things, then words? We have been looking at these sorts of questions for some 3000 years, beginning with the linguistic traditions in India and then in Ancient Greece. The Truth about language –what it is and where is came from adds to this ongoing conversation, one that has been dominated in recent times by Noam Chomsky, who argues that language arose suddenly and ‘in a way that cannot be explained by ordinary evolutionary process’.

In this engrossing book Professor Michael C. Corballis tames an array of findings, theories and disciplines to provide context for his take on the matter. What results is a highly digestible and enjoyable account of language for the general reader.

A look at our current world reveals that there are some 6000 languages spoken, over one hundred of which are spoken in Vanuatu alone. Our open-ended means of communication is far more evolved than that of other animals; it is a ‘Rubicon’ that our species has crossed. These things we know. But this gives rise to more questions and the central themes of the book: What do all of these languages have in common? What is language? Is it something we are born with or something we learn? Or both? And where did it come from?

Corballis tells us that any person can learn any languages ‘in spite of the extraordinary differences between the languages of the world’. Regardless of what we speak, we follow rules of how we put language units together to form meaningful content. We can recognise something is correct on an intuitive, but cannot tell you why. So how did we get to here? This is potentially the ‘hardest problem in science.’ 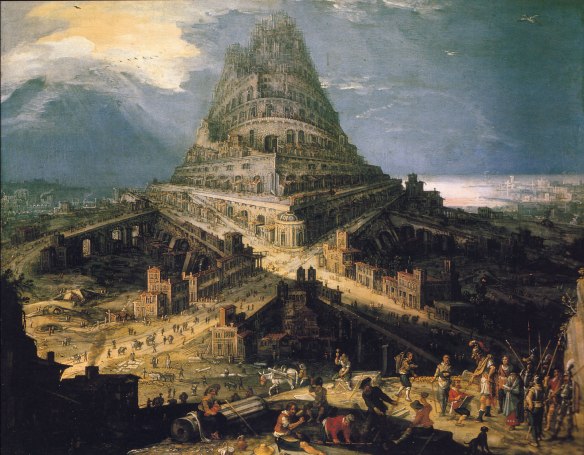 Tower of Babel, by Hendrick van Cleve, from Wikimedia Commons

Detective-like, Corballis pieces all the parts together, accommodating the findings of various disciplines – from anthropology and archaeology, through to zoology, linguistics and genetics. He guides the reader through this vast puzzle by laying out his points in a series of stepping-stones: physical characteristics, grammar, speech, how children learn, and how animals differ and are similar in communication, to name a few.

Then there is Chomsky’s theory of universal grammar, a general linguistic principal. Chomsky argues that there was first a new way of thinking, which was available only to humans (the I-language), and that the languages we speak or sign are secondary and external (E-languages). The way we form language is an unbounded merge where elements (such as phonemes or basic sounds) merge into larger units (such as morphemes or elements of meaning) and those larger units merge into still larger ones (phrases and so on). ‘The merges occur within I-language, the language of thought itself, but are manifest in the external languages we actually speak’. He explains language’s emergence in the human experience as a miraculous leap in evolution, due to a change in brain size or a minor mutation.

Enter Corballis. He argues that it came to us by ‘incremental process of Darwinian evolution, and not as some sudden gift that placed us beyond the reach of biological principles.’ He guides us through the precursors to language and the gradual changes along the way, tracing the transition from gesture to speech. Our ancestors achieved bipedialism and the hands were freed; gesturing accommodated the need to communicate information effectively in more dangerous surrounds, such as the exposed savannah. We needed to be social for survival.

Then there is speech – a triumphant culmination of fine motor skills, breathing, and the larynx. And don’t forget grammar. Corballis also takes us via the hippocampus – the part of the brain that allows us to understand scale and has a generative capacity to mind wander or to ‘time travel’ by imagining future possibilities – something other animals also demonstrate. This shared capacity lays the groundwork for the unique generative property of thought processes that language communicates. So, as Corballis concludes, it is the ability to communicate our mind wanderings, not the mind wanderings themselves, that makes us different from animals. The difference is one of degree not of kind.

Corballis writes ‘Language thrives on variation. And so does evolution’. It is a pleasure to read about the intersection of the two.

Michael C. Corballis will be speaking at the Auckland Writers Festival at 10.30am on Saturday, 20 May.

Available now at bookstores nationwide from Monday 19 May. Author Michael C. Corballis presenting at the Auckland Writer’s Festival on Saturday 17 May at 2.30pm.

Does your mind wander? Sometimes I doubt

whether mine will ever come home. What does the brain do while our mind is wandering?

This well-written and engaging book introduces the reader to the research to explore what actually happens in the regions of the brain where dreams, religion, fiction, fantasy, but also creativity and imagination, lurk. Corballis begins by considering how minds wander − what occupies them when not focussed on a particular task. This leads to discussing some of the fundamentals of neuroscience.

The layered, complex thing we call memory is first. What is a memory? What types of memory do we have? We remember events, skills, and facts in different ways. There are fascinating, although tragic, examples in which parts of the memory are damaged, and an interesting discussion of the development of false memories. I was pleased to find that Hillary Clinton and Ronald Reagan had false memories just like me.

Time is a confusing concept. Corballis takes the reader through an examination of how time is understood, or maybe at least partly formed, in the mind. Is it only humans who can mentally wander forward and back through time? This leads to the next chapter, dealing with the Hippocampus and its role in remembering, and mentally meandering through, time and place.

And now the book deals with several interlocking concepts. Can we share minds − for example by telepathy? The enormous importance of stories in the individual and collective consciousness. And the vital invention of language, and the way that language is involved with thinking.

Dreams and hallucinations are related. Corballis does not take the interpretation of dreams very seriously, and discusses Sigmund Freud’s theories about dreams in an entertaining way which leaves the conclusion in no doubt. The last chapter, on the creativity of the wandering mind, is the one which spoke most to me. “Mind wandering has something of a bad press” as the author says, but it need not be a negative thing.

Throughout the narrative is based on reporting scientific research, and anecdote. In the early chapters I found myself asking “and then what” as a passage based on anecdote ended, then happily finding the thread taken up later. The writing is well structured and the flow encourages the reader to carry on. In many places the author uses what we know about the ways that animals brains work to illuminate the way that human brains and minds function, and lessons from the history of (particularly) psychology.

The author is Professor Emeritus of Psychology at the University of Auckland, a widely published scientist and neuropsychologist. This is the first of his books that I have read, and he comes across as an able scientific communicator as well. His writing is based on neuroscience, psychology, and evolutionary biology, which he leavens with a sharp wit, and uncomplicated yet clear and precise language. I must try to find some of his others.

The Wandering Mind: What the brain does when you’re not looking
by Michael C Corballis
Published by Auckland University Press
ISBN 9781869408114