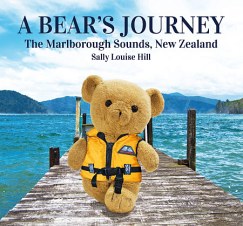 When I first opened this book, I was blown away by the stunning photos and illustrations throughout. The Marlborough Sounds is also an area I know reasonably well having visited a number of times on adventure type activities. Memories came flooding back.

Sally’s grandson, Mishca the real inspiration behind this book is now 28 years old. He travelled extensively to various places around the world with his grandparents until he was 16 years old. He is one lucky grandson having such adventurous grandparents. She plans to continue with a series of books on Teddy Bearson and his adventures.

Mishca is helping his grandparents, Nan and Pop pack up to go on holiday to the Marlborough Sounds. Teddy Bearson, Mishca’s much loved teddy bear feels neglected and is convinced he is going to be left behind. That is until he spots his very best kerchief sitting folded on top of a pack. Teddy is overjoyed he isn’t going to miss out on an adventure.

They set off the next morning early, Teddy and Mishca sitting looking out the car window soon doze off. Waking much later Teddy smells something strange and nudges Mishca awake. It was the sea – the Kaikoura coast no less. Of course never having seen it before or seals, Teddy is amazed at the sights.

The story continues on with the journey finishing at Picton and then onto a water taxi to reach the holiday home in the Marlborough Sounds. The birds and animals that Teddy meets once there make a lovely story. I read this book to 4-year-old Abby. She had lots of question around what Teddy was doing and where he was going. Having not been to the Marlborough Sounds and only seeing some of the animals and birds in the zoo, Abby was fascinated by the antics – especially of Willy Weka.

This is a stunning book – the photos are wonderful. Sally must have spent a lot of hours sorting out which photos would be suitable for this book. She also has included beautiful drawings of birds and sea life. It’s not often you come across a book that has this amount of detail. I am totally blown away. Even my husband, who picked it up and read through it, commented what a beautiful book it is. At the back of the book is a glossary explaining in more detail the animals and sea life mentioned throughout this incredible book.

Did you love this book too? You can vote for it for the People’s Choice Award in the New Zealand Post Book Awards here.

This is a powerful historic novel, spanning two

generations separated by over a century but connected by the threads of the ancestors that flow through their veins. It is a story of identity and of mixed heritage. It is immersive, and lyrically written, with an eloquence to the prose that keeps the reader truly engaged.

The first thread follows Mere, a young Maori woman of reasonable wealth in the 1880s. She follows her heart into making a somewhat reckless decision and falls in love with Iraia, her best friend and the descendent of a slave. Life is harsh for this young man, whose ancestry can be traced back to the last of the Moriori on Rekohu, the Chatham Islands. Together the two seek freedom beyond the confines of the Marlborough Sounds and find difficult times as they must face up against poverty and prejudice. Their tale is simply told and bittersweet.

Then in the modern day, we have two siblings − Bigsy and Lula − fraternal twins who could not be any more different, a one-in-a-million occurance: Lula takes after her father’s Irish heritage, whereas Bigsy follows closer to his mother’s Maori. We follow them through life, watching them grow from inseperable friends to drifting apart and while Bigsy makes his own place in the world, Lula is still drifting, unsettled. Eventually, a heart-breaking event will draw them both home and lead Lula on a quest to seek her family’s past, to question her identity, and ultimately find her roots.

Weaving throughout the stories, written in a rather more colloquial tongue, is a third narrator, the anchor for the characters, drifting and darting, offering tantalising, but brutal, glimpses into a tragic past.

This was a finely crafted read, a book that truly does sing.