WORD Christchurch: Comfortable in your Skin

In this session put together by guest programmer Tusiata Avia, Victor Roger led a panel of queer people of colour, each with different stories to tell about how they have come to be comfortable in their skin. As Roger invited each panelist to tell the audience about their journey to self-acceptance, we saw the similarities between stories that spanned continents and generations.

Manu Vaeatangitau
Georgina Beyer was up first, and she led us through her fascinating tale, from leaving home at 16 with dreams of studying at the New Zealand Drama School, a stint as ‘the boyfriend’ on soap opera Close to Home, time as a stripper and sex worker, to becoming the first transsexual Mayor and then Member of Parliament. Add in renal failure and a kidney transplant, and you have what would make a seriously fantastical biopic. And who would play her in the movie of her life? Beyer is adamant: ‘First things first, it has to be a transgender person.’

Beyer is unapologetically herself. There was never a question of her being anyone else, and her ‘Fuck off’ to the haters attitude is refreshing. She says of her teenage years: ‘When I was being Georgina I was free, I was liberated, I was comfortable in my own skin.’ 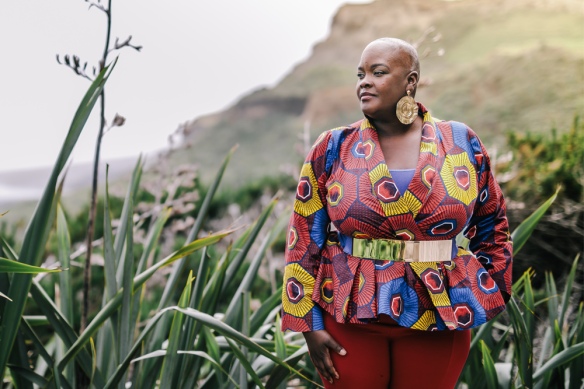 Radical Self Love activist and poet Sonya Renee Taylor is also unapologetically herself, and has made it her life mission to guide other people towards accepting themselves, exactly as they are. Roger asked Taylor how she came to this level of what she terms Radical Self Love, a movement that has it’s roots in a conversation Taylor had with a friend, which led to a poem, which led to activism and a book, The Body Is Not An Apology. Taylor answered: ‘Language creates things, so as you’re saying shit you’re making shit.’ Meaning that the more she performed her poem, the more she began living its message.

Artist and founding member of FAFSWAG, Pati Solomona Tyrell, also wants to help others become comfortable in their skin. He sees his work and the events and creations of FAFSWAG as a way to return power and knowledge to Pacific people. ‘A lot of [traditional Pacific] power and knowledge is held by the church, so it’s not accessible to queer kids.’ Tyrell talked of the close bond he has with his family, and how that bond forced his coming out to them in his first year at University, as ‘having to hold something back that was a very important part of my identity kind of wrecked me.’ Though Tyrell’s family are accepting and supportive, they can’t understand the experience of being queer. This is where the community that is FAFSWAG comes in. ‘We built, like, a little family.’

Manu Vaeatangitau is a part of that FAFSWAG family. He describes his own coming out at 15 as violent. The violence that was a constant throughout his High School years ‘made me very resilient.’ The youngest on the panel, and the last to share their story, Roger asked Vaeatangitau to reflect on whether he thought his generation have it easier than the more experienced panel members. ‘It’s a waste of energy to compare,’ responded Vaeatangitau. Drowning is drowning, no matter how deep the water. This nicely drew the panel together in a united front to wrap things up.

A last question from the audience saw Beyer respond with her same take no prisoners, give no fucks attitude, and Roger signed off ‘We end with fire from the whaea.’

Reviewed most excellently by Gem Wilder