Brandon Sanderson is one of the finest and most reliable fantasy authors writing today.

Bands of Mourning is the 6th Mistborn book and the third in the second series (sometimes known as the Wax and Wayne series). Having only read Alloy of Law, the first in the series, I went into Bands of Mourning familiar with the characters, but with some holes in their history. This did not, it turned out, matter too much. The occasional reference to the events preceding Alloy and from Shadows of Self were illuminating, while making me eager to fill in the gaps.

Centuries after the events that unfolded in the original Mistborn trilogy, the world of Scadrial has evolved into a semblance of modernity, coupled with Victorian-era technology, sprinkled with an element of steampunk and garnished with a touch of the Western. The use of allomantic and feruchemical magic is fairly commonplace, with some individuals – like Wax and Wayne – being capable of manipulating both.

In this instalment, Waxillium Ladrian, lawman-turned-nobleman, learns of a mythical artifact known as the ‘bands of mourning’. These bands were possessed by the Lord Ruler, and are said to grant their bearer immense power – almost making him a god. A researcher has found evidence that they may exist, and Wax, along with his friend, indomitable and irrepressible, Wayne, is hired to make the journey and uncover the artifact. Joining him on the mission are quick-witted Marasi, herself an allomancer; sensible and level-headed Steris, Wax’s fiance, prepared for (almost) any situation; and MeLaan, a shape-shifting immortal with a slightly skewed view on propriety. This rag-tag (but highly efficient) bunch must make their way through hostile terrain in a harrowing race by rail, land and air, to beat the bad guys to the prize. Along the way, Wax uncovers a dangerous secret society – the Set – and the means to rescue his sister from a brutal fate.

This is a highly enjoyable romp, with wonderfully memorable characters and a fast-paced, semi-crazed plot. Wry humour is scattered liberally throughout, as well as a good dose of twists and surprises. Whilst I would suggest the reading of the earlier books first: the original Mistborn series explains the Ascension, and the background behind the kandra, and from the sounds of things, I missed a whole lot of interesting twists and turns in Shadows of Self; Bands of Mourning stood quite succesfully on its own.

I  recommend Brandon Sanderson highly to fans of high fantasy, for his complex magic system, brilliant world-building, excellent characterisation and his skill in weaving them all together into a gripping and coherant story.

When Zelie Taylor moves with her family to 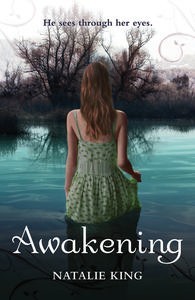 New Zealand, she has no idea how drastically her life is about to change. She is suddenly surrounded with strangers, can’t stop thinking about the charismatic Otis Hayes, and is trying to move on after the sudden death of her mother. Zelie’s first week in New Zealand has been a hectic one, but things are about to get a lot stranger…

Fragile Kate Hearn certainly doesn’t seem like a witch at first; and yet all of a sudden, she has tricked Zelie into retrieving a pendant from the icy depths of Lake Tekapo. This is no ordinary pendant, however – inside it lives the mind and soul of a seventeen-year-old boy from 19th century Europe. By the time Zelie has tried on the pendant on Kate’s orders, it is too late to go back. A spell has bound Zelie’s life to the life inside the pendant – and if she takes it off, the boy inside will die.

Several things become quite clear over the next few days; first of all, Tamas is not going to be easy to ignore. Just as confused as Zelie is, he demands news about the modern-day world, exhausting her mind as he scavenges for information. Then there’s the problem that Tamas sees everything through Zelie’s eyes, completely invading her privacy. This means never being alone at any time, and at first Zelie can’t stand it. She is desperate to get rid of the pendant – and Tamas – as soon as possible…all she needs to do is wait until he is strong enough to survive without her. But Tamas is no ordinary boy – it soon becomes obvious that he has powers even stronger than Kate’s.

Zelie is slowly drawn into this bewildering world of magic, and realises that when the time comes, Tamas will no longer need her. Will she be able to forget about the brave and witty soul that she has known for what seems like years? Or will Zelie never be safe from the magical dangers that sweep around Lake Tekapo? Only one thing is certain as Zelie tries to decide what the right thing to do is – nobody can be trusted, and nobody is safe…

Awakening by Christchurch author Natalie King is a novel for young adults that will thrill and inspire, intrigue and mystify. An addictive fantastical romance, readers will find themselves reading for hours on end as the complex relationship builds between Zelie and Tamas, and as they try to identify the true villain who is hidden in plain sight. This book is certain to become a huge hit with New Zealand teens, as it is sophisticated yet never dull. Unpredicable and filled with both relatable and eccentric characters, Awakening teaches readers that they needn’t go looking far to find their own adventure.

ther of Diana Wynne Jones – with its cast of quirky and out-of-this-world (although not literally) characters and the sprinkling of magic applied to the modern world. As a fast-paced, appealing and amusing read, it certainly appealed and completely deserves its Tom Fitzgibbon award.

Playful and fun, we are first introduced to nearly-thirteen year old Tilly Angelica, anticipating the arrival of her “changeover” party – in which her special ability (if she happens to have one) will make itself apparent. Tilly hopes fervently that it will not – that she will be ordinary like her father and not a strange “freak” like her aunts and various other cousins. Why would she want to be able to grow ridiculously oversized vegetables? Or what if her nose grew to epic proportions to give her a magnificant sense of smell? I must confess, her attitude towards her potential “gift” perplexed me – then I remembered that she was an almost teenage girl, and desire to fit in far outweighs the desire to have some unique and potentially embarrassing ability.

But the potential talent soon becomes the least of her worries. For the entire Angelica family – 25 assorted cousins, uncles, aunts, twice removed and so forth, descend on the manor house. The Southern Angelicas quickly come to blows with the Northern Angelicas and her mischievous younger brother suddenly finds himself with two identical and equally naughty co-conspirators. And that’s not all – cousin Prosper is up to something and his scheming and plotting could bring Tilly’s comfortable existence crashing around her ears.

Not only must she discover, and survive, her Angelica talent, but she must also put a halt to his evil plans. Can she do it? With the help of her brazen burmese, her best friend Olivia and the trouble-making trio… perhaps she can!

It has a relatively simple plot – not too complicated, just filled with madcap craziness and chaotic levels of hilarity. Short chapters make it a fun tale to read aloud and it should certainly appeal to those within the 9-12 age range.