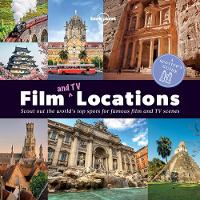 A compact book of just 128 pages takes the reader around the world, revealing more than 100 locations of classic moments from famous films and TV series.

There are stunning photographs of each location and the author has written a small description of the place, as well as listing the film and the date of the production.

Films featured range from La Dolce Vita in Rome to Gladiator in Morocco as well as Lord of the Rings: The Fellowship of the Ring in New Zealand while TV series’ settings include Game of Thrones in Dubrovnik and The Bridge in Scandinavia.

Tourists visit many of these places that provided the backdrops and settings of many of our favourite films, some of these locations being filmed naturally while others were dressed up to look like somewhere else. But they all added texture and colour and weight to the visions of our best TV- and film-makers.

My own daughter was excited to read about the Game of Thrones site as they will visit Dubrovnik when they go to Croatia later this year.

A map of the world at the beginning of the book shows all the locations included, the majority being in America and Europe, and each site also has a small globe showing the locality.

The book will be a wonderful companion for a traveller who is a movie lover wanting to fossick out places where films were shot, or it would sit well on the coffee table to be picked up and read at leisure taking the reader on a fantasy journey

Original story via Flipsnack, reproduced with the permission of the artists.

With World Book Day just around the corner, graphic designers Matt Lindley and Jazmin Batisti took eight timeless books, a mixture of children’s titles and classic literature, and stopped to ask themselves the question: what if these stories featured the modern technology we rely on today?

What if Juliet had used Tinder to meet her one true love instead? What would Oliver Twist’s TripAdvisor review of his workhouse be like? What if Frodo had used Google Maps to help him get to Mordor?

Here is where they ended up:

Original story via Flipsnack, reproduced at the request and with the permission of the artists.

Matt Lindley is a content strategist who’s involved in coming up with digital creative campaigns. Jazmin Batisti is a graphic designer from Buenos Aires. They are both currently based in London.