Maria has found sanctuary in a rented house, overlooking a small Spanish village by the sea. She is coming to terms with losing the love of her life. But her solitude and places that have become special to her are about to be encroached on by the arrival of her younger sister, Emma.

It is two years since Maria issued the invitation to her younger sister following their mother’s funeral and she is unsure if it was such a good idea. ‘Now, as I tried to think back and understand why I had blurted out the invitation, I reluctantly had to acknowledge that I might have been driven by a wish to show off. To flaunt my new life. Strut my happiness.’

The inclusion of a verse by Emily Dickinson at the beginning of the book was the inspiration the title of the novel and gives us a clue about what might be revealed in the book.

One Sister have I in our house-
And one, a hedge away.
There’s only one recorded,
But both belong to me.

It is not a long book (just 119 pages) but the author gently explores the sisters’ thoughts and feelings about their childhood and the adults they have become.

‘Why? Your father adored you. You were his little princess.’
Emma’s response took a long while.
‘I don’t really know what my father felt for me. I have no memories of us doing anything much together.’

The novel is divided into six chapters, one for each day of Emma’s stay, during which the author Linda Olsson explores the relationships over forty years, between the sisters, mother and their fathers.

Linda Olsson  has written a number of novels, her first, Let me Sing you Gentle Songs, was published in 2005 and became an international success. I had read the more recent The Blackbird Sings at Dusk (2016) and enjoyed it.

Olsson did not disappoint, her elegant style and attention to detail was again evident in this work, as the small steps in the sisters’ lives helped them to move into the future. The stunning cover invites the reader in. Anyone who enjoys a book about family relationships will find this a rewarding read.

Feelings. FEELINGS! I have them.

One of the things I really like about Auckland Writers Festival is the way it puts me in touch with the whakapapa of NZ feminism. I remember having a great old chat with older queer women in the audience for Gloria Steinem a couple of years back about second-wave feminism and how it’s different from contemporary feminism. Sitting in the audience for Writing the Suffrage Past I got talking to my neighbours again: I had (I think) an older lesbian couple on one side, and (I think) a teenage girl and her mother on the other. The intergenerational vibe was also set with an introduction from Claire Mabey, who, like our Prime Minister, is hapū. 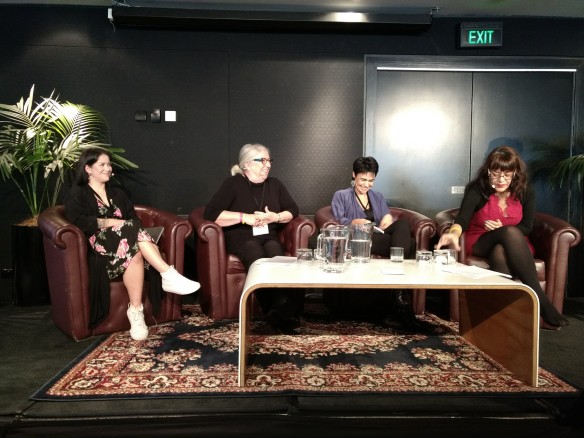 The four writers were Alice Canton, Emma Espiner, Linda Olsson, and Tusiata Avia. Canton is a NZ-Chinese theatre artist; Espiner is Māori journalist and medical student; Olsson is a Swedish novelist; and Avia is a Samoan-NZ poet. Each writer had been given access to the “Are we there yet?” exhibition about NZ feminism at Auckland Museum, and had written a piece inspired by something from the collection. An image of their chosen piece was displayed on the screens as each writer gave their talk.

Olsson was up first. The object she had chosen was a photograph from a protest with one woman holding up a sign that read “I can’t believe I am still protesting this shit”, which got a laugh of recognition from the crowded room. She spoke about a recent Oxfam report which has found that we must achieve gender equality if we are to end financial inequality. It is not enough to integrate women into existing financial structures; the structures themselves must be changed.

Olsson read out a piece she had written that was a conversation between herself and one of her female ancestors who had been sent to prison. Prison was not sad: it was safe. The women all looked the same, so they felt safe.

Next up was Espiner, who began by speaking her mihi. The objects she had chosen were issues of Broadsheet, NZ’s seminal feminist magazine that ran from 1972 to 1997. She spoke with great humour and affection about growing up with a radical feminist lesbian mother, and how what now looks like a feminist utopia felt, to a child who just wanted to fit in with her peers, like a terrible affliction. She would choose Women’s Weekly but her mother always threw it out of the supermarket trolley: ‘Broadsheet reflected our reality’.

Espiner is studying medicine and spoke about how healthcare has often been deeply misogynistic, citing in particular Sandra Coney and Phillida Bunkle’s “An Unfortunate Experiment at National Women’s”. Some progress has been made towards equality in the medical world, though: ‘the feminisation of medicine and surgery has been positive and valuable’.

Espiner honoured her mother for being a Pākehā woman who understands Māori sovereignty: ‘Doing the right thing when nobody is looking is the definition of an ally’. She ended by addressing her mother Colleen Smith directly: ‘I’m sorry for being a shit, you were right about everything’.

Next up was Canton. Her object was a black and white photograph of an unnamed servant maybe a century ago. She invited us to reconsider the way we view the suffrage movement in NZ. We tend to picture middle-class white women with their ‘spunky Elizabeth Bennet charm in the face of adversity’. But what about the no-names?

Canton used an over/under formula to invite us to think about which women are over- and under-represented in our feminism. Under: working-class women, rural women, Māori and Chinese women; disabled, queer, migrant, and indigenous women; women of colour, queer women of colour, poor women, fat women, old women, trans women. Over: cis-gendered and white women. Canton said that, even at the risk of splintering the movement, we must acknowledge that not everyone is equally benefiting from feminist achievements. As with the previous writers, she sat down to enthusiastic applause.

The final writer was Avia. Her object was a photograph of women on a protest in 1977 holding a sign on which is a photograph of a woman who has died from a backstreet abortion and “this woman died, we care” is written. Like Espiner, Avia grew up as the daughter of a lesbian feminist. She performed for us a poem she had written about being home sick one day when she was 11 years old, reading her mother’s issues of Broadsheet, and seeing the photograph on the sign. Avia looked for the photograph again in the museum’s collection for this event, because she still remembered it after all this time. Avia said of her poem: ‘Only I could have written this piece, but I don’t think it’s particularly special. It’s a glimpse into a huge female experience.’

Avia is an extraordinary performance poet and, despite the fact that she had recently  fainted backstage, this occasion was no exception. She sat and spoke calmly but we were hanging on her every word. The poem was about backstreet abortions, and it was visceral. ‘I flinch for forty years.’ We groaned and grimaced. The photograph of the dead woman shows her lying on the bathroom floor naked. Avia called the V of her legs ‘her final vanishing point’ and said ‘I have not misremembered her aloneness / I never forgot that’.

This was a really powerful session that gave me a great sense of community and of the whakapapa of mana wāhine in Aotearoa. In a similar vein, I recommend the podcast On the Rag from The Spinoff about Kiwi feminism. (I am a massive fan and keep secretly hoping they will invite me to join them.)

Words and photos by Elizabeth Heritage

Books by each of the writers participating are available nationwide.

The cover of The Blackbird Sings at Dusk is soft and gentle, inviting the book to be opened for the reader to be enveloped into the lives of three lonely people. The blackbird drawings at the beginning of each chapter help in making the book inviting.

Elisabeth moves into an apartment block, and shuts herself from the world outside, with her only companion The Woman in Green who appears in her dreams during the night.

Across the hallway, Elias believes a package wrongly delivered to him may belong to the new tenant and tries to make contact with her, only to discover she has blocked up her doorbell. However he leaves the parcel at the door, which Elisabeth finds, and as a way of saying thanks, leaves a book outside Elias’ door. He reads the book with help from his friend Otto who lives upstairs, and after he reciprocates with a book of his, the nightly exchange continues between the pair.

Elias also shares some of his drawings with Elisabeth, and an image of a blackbird had a profound and lasting impression on her: ‘The bird was so delicately painted, just a few brush strokes, yet so alive it might fly off the paper at any moment’.

When Elias is badly beaten up outside the apartment, Elisabeth seeks the help of Otto after going to his aid, and this leads to a gentle friendship, their love of books slowly leading all three back out into the real world. The reader gradually discovers what has led the characters to the apartment building and as they unpeel their backgrounds they help each other to heal and move forward.

I enjoyed devouring this book slowly, it is a beautiful piece of writing and author Linda Olsson includes fascinating glimpses of her homeland Sweden. The ending was a surprise and leaves the reader wondering.

Linda Olsson moved to New Zealand from Sweden in 1990 and has written three other novels. The Blackbird Sings at Dusk will be enjoyed by anyone who enjoys a bit of intrigue, and romance.