Combined with the perfect timing for Mother’s Day, the pretty and colourful cover, the by-line ‘a novel of love, lost memories &amp; rediscovering dreams’, this really looks like a great piece of enjoyable reading, in rare and craved for moments of solitude, cat or dog curled up next to you, glass of wine, cup of tea, piece of cake! Bliss.

Karen McMillan is a North Shore, Auckland based writer. She has previously written, to popular acclaim, two novels themed around WWII in Poland and America – The Paris of the East and The Paris of the West. This novel is quite, quite different in every possible way from her two previous novels.

The writer has tapped into the now (getting a little worn) theme of ‘woman losing memory’, focusing on Rebecca, who loses the memory of ten years of her life, from her 32nd birthday to present day. She is now 42, when she wakes up in hospital, concussed from a fall down some stairs. She is still married to Daniel – a once successful NZ rock star-now music tutor, lives in Browns Bay on Auckland’s North Shore, and works in the city in some sort of graphic designer capacity.

In the ten year period that she can’t remember, many things happen to her and Daniel –illness, death, loss, good times and bad times. None of this of course is known to Rebecca when she wakes up, seeing her adorable and adoring husband by her bed and her best friend Julie. Life is peachy, other than a bit of a headache. Not so.

The novel, of course, then sets about revealing what has really gone on in those ten years, working towards a well managed climax, and subsequent resolution. Well crafted then, with plenty of tension, some curve balls, a mysterious stalker, the horrible boss, ageing parents, health issues, and at the core of the novel, the state of Daniel and Rebecca’s marriage.

So much of this novel is good, with a straightforward story, some very insightful writing on grief, the nature of memory, the brain recovering its memories, the complications of every day life and relationships, and especially the sections on Rebecca’s serious brush with breast cancer, which I understand are strongly based on the author’s own experience of breast cancer. I learnt a lot, not just about the physical experience of the disease but also the emotional experience. Very, very good.

But, for me, and I stress most strongly that this is my own personal reaction to this book, it is just average. There are a number of unfinished threads, and I just could not relate to Rebecca or Daniel. I couldn’t understand, and there is no explanation in the book, why such a talented and successful artist as Rebecca was ten years ago, is now working in some horrible unpleasant design firm doing reworks of work she has already done; we never find out how the accident happened even though decent sized chunks of Rebecca’s thoughts are taken up with this mystery; how serious is this head injury, how long had she been in hospital for, concussion can take months to recover from – she is back at work seemingly full time two weeks after she becomes conscious again with nothing but the odd headache.

I honestly thought Daniel was pathetic, a wimp of a man. He can’t bring himself to tell his wife of one terribly tragic event, or that they were on the verge of separating, because suddenly, what-ho, his newly conscious wife is a sex-goddess! What man in his right mind would want to lose that!

Best friend Julie is by far the best character. Forever berating Daniel for his inability to talk to his wife, she spends most of her time protecting Rebecca from herself, looking after Rebecca’s elderly mother in the rest home she works in, and generally trying to keep one step ahead of all those around her.

This is a very Auckland-city novel, depicting the city’s love affair with real estate – big modern homes and quaint Devonport villas, cafes, the hideousness of the transport infrastructure, the whole glossy magazine feel about the place, the people, the lives they lead. Even though I live in Auckland, I found all this quite cliched and cringing. We get this in the papers, on TV and media every single day, surely there are other aspects of the city that the author could also have found to illustrate her novel.

It reflects what I feel overall about this novel – that despite the serious and important themes, much of it lacks depth and insight, too glib, things are just brushed over instead of going just a little deeper. There will be people who love this, I appreciate that, and for an easy, lazy Sunday afternoon read, it will definitely fill the gap.

Available in bookshops nationwide.
Paris of the West will be celebrated at North City Paper Plus in Porirua, next Tuesday 3 May. All welcome, from 6pm – 7.30pm.

Karen McMillan is a New Zealand author. Her non-fiction titles include Unbreakable Spirit, Live in Aotearoa; Feast or Famine and Dying: A guide for the Journey, an adaption of a South African guide for the terminally ill and their loved ones. Karen’s fiction titles include Paris of the East and Watching over Me. She has worked in publishing for the last fifteen years.

The story opens in the year 1948, with the Second World War over, but with many victims suffering injuries that cannot be seen: injuries to the mind, as well as to the soul.

Celine had worked for the Polish Resistance but was captured by the Nazis and incarcerated in Ravensbrück concentration camp. Few survived. Her husband Rafael and her brother-in-law Marek were also part of the Resistance, but Rafael eventually trained as a pilot with the RAF. Rafael and Marek’s parents Beatrycze and Aron Domek had escaped Poland before the war, settling in San Francisco, often referred to as ‘The Paris of the West,’ and established shipping company the Great Star Line there. They used their influence to get berths on the SS Edwin Drake for Celine, Rafael, Marek and the Professor, Celine’s father.

They are welcomed to the USA by Beatrycze and Aron, with the invitation to share their home until they are able to find jobs and somewhere to live. Beatrycze is extremely generous to Celine, providing new clothes while making sure she is safe and comfortable. The past, however, is difficult to overcome, with Celine having constant nightmares about her treatment while in Ravensbrück. This affects her relationship with her husband Rafael. Rafael takes up the job offered by his father in the shipping company as a clerical assistant. Marek declines a similar offer, seeking a career as a journalist.

Rafael and Marek’s parents are very generous, and help to set the married couple up in their own home, while giving money to Marek for the same purpose. The couple are joined in their new home by Celine’s father, who has a journey of his own to undertake. Marek uses the money given him to live on while applying for positions as a journalist. Celine needs tutoring in English, which Marek is able to offer, and their friendship blooms as a result.

Meanwhile, Marek is falling in love with somebody else – a jazz singer called Serafina whose voice he hears each night from his home. But the course of true love never does run smooth, as Serafina’s mother tries to interfere with their relationship.

The strength of this book was its portrayal of the long-lasting effects of war, both physical and mental. While it was a great read, I was left wondering if this was part of a trilogy or just a stand-alone book. I kept wanting more, waiting for intrigue or some failure with the family’s stay in the US. I have enjoyed other books by Karen McMillan and was slightly disappointed with how this story ends.

This title is available now in bookstores. 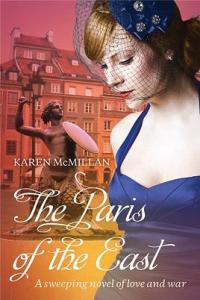 Her non-fiction titles include Unbreakable Spirit;
Live in Aotearoa; Feast or Famine and Dying: A Guide for the Journey, an adaption of a South African guide for the terminally ill and their loves ones. Karen lives and works in Auckland. She has worked in publishing full-time for the last 14 years.

Warsaw was called “Paris of the East” before the Second World War because of its beauty and elegance. In 1939, four friends (Celina, Rafael, Marek and Anna) were having a picnic on a beautiful summer’s day to celebrate an engagement – that of Celina and Rafael.There was a rumble of war, but everybody was hoping that it was just a rumour and that it would come to nothing. Months later, Poland is invaded, with Germany taking control of Warsaw and Poland. Rafael and Celina marry before Rafael, already in the air force, has to fight in combat. The three friends remain in Nazi occupied Warsaw and become members of the Polish Resistance.

The author, Karen McMillan spent a year researching this book. The book is inspired by many real life stories of brave Polish men and women.

I found this book very hard to put down. A tender love story, a story of courage and survival set in extraordinary times. The action goes from Warsaw to Lublin, from Bucharest to Paris, from Paris to Ravensbrück Concentration Camp.

While I personally enjoyed reading this book, I wonder if the brutality of the life of the inmates at Ravensbrück Concentration Camp, described so wrenchingly in this book, may put some readers off. I hope not.

The opinions on this blog are those of individual blog contributors and not necessarily those of Booksellers New Zealand.
Booksellers NZ – Book Tokens