Anyone who has a cat knows they love to bring the wild life they catch to show you, and let it go for a run around if they have the chance!

Joy Davidson’s new picture book tells the story of Grandma’s big black cat as it explores its back yard and brings his loot back through the flap in the door. The grandchildren holidaying with Grandma experience first hand the chaos in the house and are almost too frightened to come down stairs as the week progress’s as there are ‘creepy crawlies everywhere, and rubbish piled up high.’

Wonderful descriptive sentences tell the story, familiar to many cat lovers, which will have children laughing out loud, and the repetitive phrases will encourage the children to join in.

It is a fun book and Jenny Cooper’s illustrations add an extra dimension, to involve the children to seek, find and identify the creepy crawlies the cat dragged in. The facial expressions on Grandma and the children convey vividly the tension in the house with each day. But I love how she has captured the cat’s expression sitting half asleep with almost a smirk on its face, I have seen it many times as I have chased a mouse around the kitchen with the cat wondering what the problem is.

What a fun way to learn the days of the week, identified in a larger font, and with the use of capitals Davidson ensures the reader will emphasize the more dramatic sentences. This book will be loved by children and adults as they turn the pages to find out if Grandma solves the dilemma of ‘what the cat dragged in.’

Winner of the 2015 Storylines Joy Cowley Award and the 2017 Notable book award for Witch’s Cat Wanted, Apply Within, Auckland based Joy Davidson, is also the author of The Tree Hut and Titan the truck.

Oh No! Look what the Cat dragged in
by Joy H Davidson, illustrated by Jenny Cooper
Published by DHD Publishing
ISBN 9780473448318 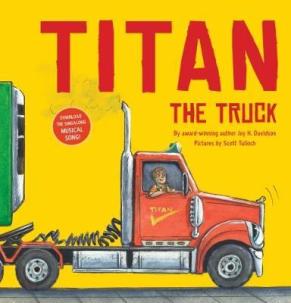 Titan is a large truck driven by Baz, who clearly loves both his job and his personified vehicle. I found the beginning of the story strongly reminiscent of Tony Mitton/Ant Parker books: ‘The trailer could have bolsters, for hauling logs or poles, Or maybe even tipper bins, for gravel, rock or coal.’ However, it soon drives off in a different direction while maintaining the same pattern of rhyme, as Baz and Titan make various stops along the road.

The repetition of the phrase ‘the load just can’t be late’ suggests it’s inevitably going to be late somehow, and thanks to a stray cow, the somehow turns out to be fairly catastrophic. Such an accident is a bold move in a book for small children, but I think it’s mild enough that most should cope with it. Nothing a bit of mechanical work, panel-beating, and bone-setting can’t fix!

The accompanying song (with some nice jazz saxophone) is long at six minutes, but quite catchy, and it shouldn’t make the teachers groan if it’s added to the playlist on the kindy stereo. The song adds a chorus and uses several pages from the text but doesn’t match it exactly. That would be a problem for a read-along book and comes across as slightly unprofessional, but I don’t think it matters for preschoolers.

I found the book punctuation-heavy, with too many exclamation marks especially. The rhyme and metre are mostly smooth, but they falter on the emergency/urgency page.

The lively illustrations capture the various New Zealand settings well – my favourites were the one by the lake and the one with the railway crossing. (My kids noticed that the placement of one of the carrots at the accident scene makes the cow look like a unicorn!)

The rhyming and illustrations will make it a firm favourite with under-fives who are obsessed with large vehicles. 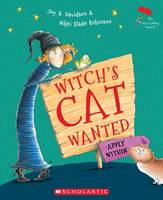 Joy H. Davidson is from the Hawkes Bay. Davidson recieved the 2015 Joy Cowley Award for the unpublished manuscript of this book. Nikki Slade Robinson lives in Opitiki, and has written and illustrated a number of children’s books. Slade Robinson won the Picture Book award at the 2016 NZ Book Awards for Children and Young Adults for her book Little Kiwi’s Matariki.

There was once a very pleasant witch. She looked exactly as a witch should look, except for one small, furry detail. No cat! She had a broom and a tall black hat but her spells wouldn’t work without a cat! She stirred her cauldron and with a rumble and a hiss, the cauldron spat out a sign!
Witch’s Cat
Wanted
Apply within

Knock, knock, tiddly-ock knock (don’t you love those words? – they drip off the tongue) on her front door. Outside sat a fluffy Persian cat. “I’ve come about the job” she purred. “Please come in,” the witch said. Unfortunately on further questioning the fluffy Persian couldn’t possibly ride on her broom as he’d get broomsick and cough up fur-balls into her cauldron. Whoever heard of a broomsick cat?

The story continues with an elegant Siamese cat applying for the job – he too was unsuccessful as he couldn’t possibly eat animal gizzards and live with toads and lizards. He was far too fussy with his food to be a successful witch’s cat.

I read this book to nearly 2-year-old Quinn. She sat attentively listening to the story with us both stopping and admiring the different cats. Quinn’s vocabulary is fairly limited, but she really enjoyed this story. I was told to “read it” Grandma again and then again. Quinn then took the book from me and said “mine”. So one little girl was captivated by poor witch trying hard to fill a job vacancy for a full-time companion and assistant. The ending is rather wonderful with the solution so obvious, it’s a wonder we all didn’t think of it!

This is a beautiful story with such lovely illustrations. Quinn has a birthday shortly so this book will join others as part of her 2nd birthday presents.