What an absolutely jam-packed and wonderful day this has been. Already, this morning seems an age ago. And there’s still a whole day to go!

We started with veteran

novelist A.M. Homes, who, I was intrigued to discover, is known as A.M. rather than a more standard first name. She was a pleasure to listen to: intelligent, candid, wry, unafraid. She was also very, very funny: “I’m up for adoption now too if anyone’s interested…I come with a child, pets and a very big life”. She spoke about her writing life and its constantly shifting mix of truth and fiction, darkness and humour: “everything is and isn’t a joke”.

One of the things I am particularly enjoying about this festival is the mix of the literary with the scientific. Homes − in common with the scientists I have heard speak − talked about how “the future for all of us is going to be not what you know but what you can imagine.” I was also struck by a comparison with yesterday’s session on the West’s characterisation of the East: Reza Aslan said that we always use the ‘other’ to define ourselves, it’s what we’re afraid of. Homes said she’s more interested in the ‘other’ than in herself, it’s what draws her to fiction and keeps her writing.

Next up was historian Frank Dikotter on The Tragedy of Liberation, the fate of China under communism in the 1940s and 50s. In contrast to the previous sessions I’d attended, in which people sat on the stage in conversation, this one was a lecture delivered by Dikotter pacing up and down the stage, as though to express the thrust of his thoughts through motion.

Dikotter, who is based in Hong Kong, has been granted access to the Chinese archives, and what he has uncovered about the fate of the Chinese people under Mao is horrifying. The statistics of deaths and torture, of children as well as adults, are all recorded there, largely forgotten, and Dikotter has taken it upon himself to publish them to the world in a series of very successful books.

Although Dikotter’s delivery was measured, his argument carefully structured and his every assertion meticulously backed up by fact to the best academic standard, what really came across was his anger. I wasn’t the only one to notice: in audience question time, someone got up and complained that he was partisan and that this was not the way to have a constructive dialogue about the past. I was reminded of a book I read recently, Empress Dowager Cixi: The Concubine who Launched Modern China by Jung Chang. (Cixi was the power behind the Chinese throne in the second half of the nineteenth century. I have reviewed the book here). This also is written by a passionate scholar determined to redress a perceived imbalance in history. I left the session interested to read Dikotter’s books and examine his bias for myself.

The next session was a definite high point for me: Jim Al-Khalili taking on Science and the Big Questions. I had seen him yesterday in A Question of Civilisations and had been struck by his obvious passion for science and the exploration of important ideas. His conversation with Shaun Hendy was pleasingly ambitious in its range: how the universe began and will end; the nature of time and space; the way mathematical laws could extend not just throughout our own universe, but through every conceivable variation of a universe in an almost infinite multiverse. Quite a lot to cover in an hour on the Aotea Centre stage at the Auckland Writers Festival.

I enjoyed the session immensely, and it went really fast – and I now know that, while my subjective experience of time is largely irrelevant to the universe, time is not in fact the absolute constant that clocks would lead us to expect. Khalili managed the trick of appearing authoritative without being dogmatic or unapproachable; teaching without patronising; and inspiring creative thought and the desire to learn in his audience. The proof is in the purchase: I went straight out to buy his book and get him to sign it for me.

The really big event for today, though, was definitely An Evening with Sandi Toksvig. If you’ve never heard of her, I urge you to immediately download the free podcasts of The News Quiz from BBC Radio 4, plus as many of her episodes of Whose Line Is It Anyway? and QI as you can get your hands on (actually, just watch the whole of QI, it’s reliably wonderful).

Toksvig initially came onstage by herself, 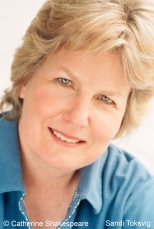 just to tell us jokes (“I love that, in the English language, we can have the man who fell into the upholstery machine but is now fully recovered”) and generally chat to us. She was irresistibly funny, charming, and wise; and, while being obviously one of the smartest people in the room, made us believe there was nothing she’d rather be doing than talking to us. I was sorry when Sean Plunket came onstage to interview her – I felt he added nothing, and confined her to boring interview questions when I would much rather have heard her natter to us about whatever took her fancy. (I would also have loved to hear her speak more about her books). But it didn’t really matter: Toksvig’s ebullient charm filled the packed and enthusiastically applauding theatre.

Once again I have ended the day with a brain absolutely buzzing with a delicious mix of words, ideas, and exciting new discoveries of authors and thinkers. Bring it on!

Events reviewed by Elizabeth Heritage on behalf of Booksellers NZ

My first event today, A Question of Civilisations, was a panel discussion between Iraq-born scientist Jim Al Khalili (left), Egyptian writer and campaigner Yasmine El Rashidi and Iranian-born scholar of religions Reza Aslan, chaired by Radio New Zealand’s Susie Ferguson. The discussion was wide-ranging, from the West’s perception of the East to the ‘youth bulge’ in the populations of Middle Eastern countries; and from the history of Arabic achievement in the sciences to the way media narrative shapes our views of other cultures. I found it utterly fascinating and was very sorry when the session ended.

Aslan characterised the cultural shift taking place amongst Middle Eastern young people as the casting off of ascribed identities, the rejection of both colonialism and counter-colonialism and the creation instead of an identity that does not rely on foreign definitions. Rashidi, who had spoken so intimately at the gala night the evening before, talked about how Egyptian women are choosing to wear the veil increasingly as a sign of cultural identity rather than religious affiliation, and how the sense of inferiority that she remembers feeling compared to Westerners when she was a child is gradually draining away. I was particularly struck by the way Khalili (who is currently the president of the British Humanist Association) spoke of the opening up of the world (in terms of increased connectivity through technology) as hopefully leading to a “moral homogeneity”; a global civilisation in which we can all agree what is right and what is wrong. What an extraordinary dream.

Next up was Scottish author Irvine Welsh (left) in conversation with Noelle McCarthy. In common with the previous session, it was chaired by a Radio New Zealand presenter, giving me that strange sensation you only get when a familiar voice turns out to have a (completely unfamiliar) body. Also in common were themes of media and narrative, and the ways in which news media ascribes story arcs and three-act structures to real life, which is of course messy, fragmented and illogical.

Welsh, who I’d also seen at the gala night the previous evening, slipped very smoothly into interview mode: since the success of Trainspotting a decade ago, he has obviously become a professional novelist and a regular on the

festival circuit. His accent – unlike that of many of his famous characters – was easy to understand, and he and McCarthy had an excellent rapport. He came out with some great quotes:  “As a Scot, it’s my birthright to look silly without any clothes on”; “I love the way we’re constantly undermined by our physical selves”; “learning to de-role might have saved my first marriage”; “sometimes characters gatecrash their way into a novel”.

And lucky me: I got to spend An Evening with Alexander McCall Smith! (also with an unnervingly embodied familiar RNZ voice, Jim Mora.) From the moment he appeared, Smith (left) had the packed-out theatre audience in the palm of his hand. He was friendly, charming, completely at ease; seemingly genuinely pleased to be with us and enjoying spinning us yarns. He was welcomed onto the stage by a bassoon player, in honour of Smith’s role as progenitor of the Really Terrible Orchestra http://thereallyterribleorchestra.com/wordpress/ in Edinburgh. (He joked that they only get conductors who are on community service.)

The good news, if you’re a fan of Smith’s books, is that there are a hell of a lot of them and they keep coming, at the astounding rate of four or five novels each year. He told us he writes a thousand words a day and that he’s due to finish off

the latest Ladies’ No 1 Detective Agency manuscript by the end of the week (huzzah for more Mma Ramotswe!). He calls this “serial novelism” and notes that it is invariably fatal. And, as if this didn’t keep him busy enough, he’s also a publisher, running a small press that publishes his “friends’ mothers’ books – most mothers do write books”. He invited the audience to send him their mothers’ manuscripts.

As with A Question of Civilisations earlier today, conversation turned to Western perceptions of other cultures, in this case African culture in the Botswana of the Ladies’ No 1 Detective Agency. Because Smith’s books are generally happy, he is often accused of wearing rose-tinted spectacles, of being patronising; of being fundamentally unable, as a white man, to write in the voice of a black woman. His response? Although there are undoubtedly bad things in the world, “I believe in denial, it’s really really good”. Unlike Welsh, Smith chooses to focus on kindness and forgiveness rather than cruelty and degradation, and it’s obviously working – the theatre was full not just of people who’d come to hear him talk, but of devoted fans.

Today has been a mixture of two of the things I love most about writers festivals: seeing writers whose works I have enjoyed, and hearing very different, separate discussions which seem to connect to each other in unexpected ways. Looking forward to tomorrow!