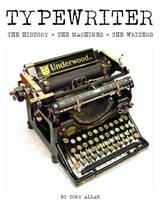 Typewriter is a delightful little gift book, hardbound and with a fittingly
retro look to it. Inside, the front/endpapers, emblazoned with packaging images for ribbons, invoke nostalgia, and the font mimics that of the early mechanical devices. Illustrations abound, from old advertisements to photographs of the various typewriters themselves.

Here we have the entire history of mechanical writing machines, a history which began as early as 1714, when the first patent for an artificial typing machine was issued, but the pace of invention really came to the fore in the 19th century with the industrial revolution.

Contained here, is a wealth of knowledge for the typewriter aficionados. Did you know, for example, that typewriters were, in part, designed to help those with poor sight? The Braille typewriter was invented in 1892.

Within the collected pages we have the bizarre-looking Pincushion, the first commercially produced typewriter (1862). There is also a list of patented machines lost to history, a selection of museums that you can visit, a timeline of milestones in typewriter history and a fully-labelled Underwood typewriter ( the first “modern” typewriter) identifying all of the parts. It is easy to forget, in this modern age of keyboards and touchscreens, that once it all had to be done mechanically.

I found the section on the keyboard arrangement to be the most interesting. How little quirks in a keyboard (a misaligned E, a fainlty inked P) could be used to identify a machine and thus solve a crime. The QWERTY keyboard, which most of us use today, first found its use in 1874, and was designed to prevent the typebars from clashing, thus allowing the typist to reach greater speeds.

Outside of the technical aspects, Typewriter also delves into the cultural, listing famous authors and their typewriters, as well as their appearances in both classic and modern film. There are even instructions on how you can make your own concrete poetry, which uses the typed word to create poems in shape as well as in text. It delves into details on how the typewriter has shaped the world as we know it.

Whilst this book is definitely targeted at a very specific market, it does have a charm to it, and it cannot help but spark a small sense of affection to these typing machines that have largely now been supplanted by their electronic descendants. A nostalgic keepsake.

The Typewriter: The History – The Machines – The Writers
by Tony Allan
Published by Shelter Harbour Press
ISBN 9781627950343

Available in local bookshops within the Maungawhau area.

Friends of Maungawhau (FoM) has been in existence since the 1980’s as an informal group of local residents. It began as a sub-committee of the Mt Eden planning group. Under Sue Bulmer’s leadership, the FoM was formed. She built a close relationship with various people including Ngati Whatua heritage advisor Ngarimu Blain and historian Pita Turei. FoM was incorporated in 2002. This book is a history of the work of this group, and more broadly, a history of the industrial background of the region.

FoM’s objectives are to preserve and protect the natural and cultural character of Maungawhau and to defend it against harm and unsustainable use. FoM’s focus is on practical volunteer action and care for the natural environment and advocacy for co-ordinated management.

Maungawhau was once the site of a large terraced Pa, one of the three largest in Tamaki
Makaurau. From the 1840’s onwards, Maungawhau  was used by settlers for grazing of cattle, horses, goats, pigs and geese. In 1930 this ceased, following grass fires during the long hot summers, but it was to resume in the 1940’s. This was seen as a way to control vegetation. From the 1960’s Bob Linton leased land on Maungawhau; with his son taking over the leases in 1995. They grazed Hereford-Friesian crossbred calves for a year, removing them at eighteen months of age. Concerns were beginning to surface over the impact of the cattle on archaeological features. Also weed control was becoming a major problem with erosion after spraying.

In earlier years at least five pits were quarried on the flanks of Maungawhau – something I am familiar with from my own family history. Erosion is now a huge problem in all areas.

In the 1990’s and early 2000’s a few keen people largely working independently began to take practical steps to show what could be done with sustained effort. Experiments were carried out with different species with some successes with canopy and understory planting. 2000 – 2006 Kit Howden supervised public planting days and regular volunteer weeding sessions.

This is a very detailed book which also outlines FoM working closely with Council and Iwi to define strategies and solutions to the problems of the area. This has resulted in some successes, but it is evident that considerable work needs to be completed to achieve the FoM’s objectives.

This book was a real eye opener to me – the dedication by this particular group is astounding and because of this and other similar groups archaeological and historic sites all over New Zealand are being preserved.

There have been many books written about coal mining in New Zealand; however this definitive work by Matthew Wright has certainly set a new benchmark. His discussion, in considerable depth, explores the strategic importance that coal had in the New Zealand of the late 19th and early 20th century and the social reform that resulted from coal miners’ recognition of national dependence on coal. The turbulent history of coal; the exploration for it, the mining of it, the use of it and the manner in which the political system was shaped by it, is superbly illustrated with subtle epithets which give the reader a deeper appreciation of the uneven progress of our coal mining heritage and history.

The significance of the local coal mining industry to wider society is offered in considerable detail; for several generations of New Zealanders it was an essential commodity for all manner of domestic functions, it provided the power for transport on both land and sea and the feed stock for gas works all over the country, it fuelled coal-fired power stations; the development of supporting industries and the general dependence on coal in the formative years of our country.

The reader is skilfully led from the very beginning of coal formation, through the early human realisation that it actually burned, into the exploration of the West Coast coalfields by Brunner, Rochford and von Haast. Coalfields that were to become household names throughout the country – Nightcaps, Kaitangata, Grey Valley, Denniston, Stockton and Waikato – are given a thorough examination in terms of industrial upheaval and the devastating personal effect of mine disasters.

Indications of when the industry began to falter are introduced in subtle ways; ships burning oil as far back as 1914, railways converting to diesel powered locomotives, the gradual disappearance of the gas and coke works in the cities as the distribution and supply of electricity offered a more convenient, and cleaner, alternative. In addition the rise of conservation awareness, the Clean Air Act 1972, the global warming indicators, all conspired to initiate a gradual move from a society that depended on coal to one that didn’t.

Attempts at explaining mining technology and terminology got a little off track which is a shame because this detracts somewhat from the value of the book as a reference work. Longwall mining is mentioned as being the preferred mining method in a ‘majority’ of pits, but this is not the case.

Wright goes on to discuss the dissolution of the money-losing State Coal Mines operation and the creation of its replacement, the Coal Corporation of New Zealand. He recognises the significance of change from an industry that supplied a diminishing domestic market to one that became very dependent on the export markets, thus illustrating the vulnerability of the industry. The dark days following on from the deaths of 29 miners at Pike River mine following a series of explosions in November 2010, coupled with the drop in the coking coal price in mid-2012 resulted in an acceleration of the ‘fall’ of coal as a commodity.

As Wright says, ‘coal was no longer cool’.

Coal: The Rise and Fall of King Coal in New Zealand
by Matthew Wright
Published by David Bateman Ltd
ISBN 9781869537234