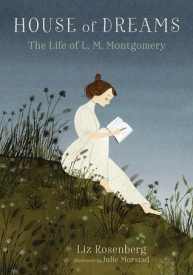 What a wonderful biography, of the girl known as ‘Maud’, who was the wonderful writer behind Anne of Green Gables. As well as many other novels, a couple of biographies, and countless poems and stories.

Sometimes you are so secure in your own world, you forget about our collective history as women. That once, women were expected to be no more educated than was required for the purposes of keeping a household in order. And that it was seen as perverse if a woman required any further education, let alone needed money to achieve this end. When relatives died, money was not left for the education or keeping of a female relative, but to the boys in the family.

Reading Maud’s story made me cry several times. Her mother died when she was only two, so the family moved to Cavendish, her mother’s parents’ grand house in Prince Edward Island, where she was raised by them as her father departed to make his fortunes elsewhere in the new country of Canada. Her grandmother showed very little emotion nor love, but cared for her in her own way. Her grandfather is rarely brought into the biography by Rosenberg, except to say ‘no’ when asked for money towards Maud’s education.

Rosenberg portrays Maud’s real love as her writing, and secondly, her friends. She had many deep and lasting friendships, both on Prince Edward Island and later, on the mainland. She was very tied to her home, and was immensely aware of the beauty of the world around her.

This biography puts forward the idea that Maud was manic depressive, and had seasonal affective disorder. Rosenberg uses past biographies, alongside letters and diaries to build this throughout the book, which is told in beautiful prose, balanced with a biographers’ eye for information worthy of inclusion. There were no parts of the book where I couldn’t see the purpose each paragraph played in telling the story of Maud. This is the mark of an excellent biography.

Maud was let down quite severely by many in her life, but never her Grandmother Lucy, for whom she was named (the L is Lucy). Grandmother gave her hard-saved cash from the household fund to help her achieve her two stints at University, as well as helping her to get a job to earn the rest of the cash.

Maud’s success in writing was self-made, and she was extremely driven. After being a teacher for a couple of years, then a journalist (thanks to a suitor getting her a job), she returned back to Cavendish to look after her ailing grandmother, and stop her being kicked out of her home by her uncle John. That is where Anne took seed in her mind, and there is a site nearby the original home, that is labelled as being Green Gables.

There are lovely line-drawings at the front of each chapter, summarising the topic of each chapter – the passions, the depressions and more of Maud as her life plays out. The illustrator is Julie Morstad, and they feel deliberately similar to the turn-of-the-century illustrations of Anne of Green Gables.

I finished this biography with many things to thank feminism and the study of psychiatric medicine for. The ability as a woman to work full time, and have children; the ability to get pills for ailments of the mind; the ability to live independently of a man should I so wish. Rosenberg has brought a truly fascinating story to life with her own writing gift. I’d recommend this to anybody who wants an insight into the life of a writer, and the life of a woman over the turn of the century.