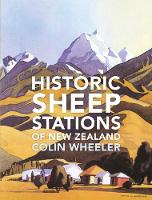 Sheep, mountains, rugged people and painting. All these are important parts of the New Zealand psyche. They help to define us and the original publication of this book drew them together in a wonderful way.

It is now 50 years since Colin Wheeler and his wife, Phyllis, took to the road and travelled North and South Islands meeting with the owners, talking, sketching and painting the sheep stations of New Zealand. The three original books are now combined into one and in this limited edition; we can once again enjoy the stories and images captured between 1967 and 1972.

Colin Wheeler retired from teaching art at Waitaki Boys High School to paint, sometimes spending 70 hours a week at his easel. His artworks capture both the huge magnificence of mountain and sky, but also the oft-missed details in the woolshed or cookhouse. Each book included a detailed map showing location, a summary of the people and the history of the station, a large coloured painting and finally a number of smaller sketches. In the original publication, the plates were on glossy paper and separate to the text, but in this edition, they are part of the book. Changes in printing techniques ensure the quality of the original plates is maintained.

I was the proud owner of the first edition of Historic Sheep Stations of the South Island. Aged 11, I copied the flyer for the book in a painting and my teacher, Sister Winifred, arranged a local man to frame it. I gave it to my parents and they were astounded. I still have that painting and for my next birthday, they bought me the book. It was an expensive publication and I treasure it still, 50 years on. So this book set me on an artistic path for the rest of my life. Thank you, Colin Wheeler.

Over the years, I have looked for copies to complete the set of three books by Colin Wheeler, but unsuccessfully. This new edition is a joy to own. It still holds the magic of mountain and farm. These were the years when sheep farming was the most important agricultural industry in New Zealand. It was also at this time that Mona Anderson wrote her record of station life in A River Rules my Life. The country was in awe of the people who chose to live and work on sheep stations, often in remote parts of New Zealand.

My sister worked at Grasmere station for one season and my brother now runs one of the stations. This book captures for them the stories and the landscape. It is a great gift for anyone who has grown up in the 60’s and 70’s with the stories of the backcountry as their heritage. I cannot think of a better present for a 60th or 70th birthday.