With the imminent death of Aberdeen’s crime boss, McRae is drawn into the takeover battle between crime leaders from Edinburgh, Glasgow, Aberdeen, Liverpool and Birmingham. But he is compromised by a financial deal made years ago. Faced also with the inevitable prospect of taking life support from his girlfriend, his mind is in a mess.

So competing leaders are vying for Wee Hamish Mowat’s Aberdeen empire, amidst complicated ongoing murder investigations. Meanwhile, his own position as Sergeant in Banff – if not his job with Police Scotland – is under threat.

So many twists, so many turns…you have to read it to believe it, as they are only minor background to the ongoing investigation into the missing Fraserburgh businessman, Martin Milne. Not a simple locate and return mission.

Blood and guts, battles and falls, night hunts – this has it all. Another masterpiece in the ongoing saga of Ian McRae and DI Steele. 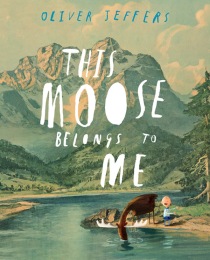 This book is in bookstores now.

Abby my 18 month granddaughter swopped upon this book and demanded that I read it to her. She was intrigued by the idea of a moose (she has no comprehension – is it a cow or a horse?) and Wilfred’s adventures with his moose. Wilfred promptly names him Marcel. Marcel was very good at sheltering Wilfred from the rain (rain Mammar – can’t say Grandma yet!).

Wilfred did have rather a lot of rules that were perhaps above Abby’s ability of comprehension, but I could imagine Eden my 5 year old granddaughter understanding rules. When you are a bit older life seems full of rules.

Marcel though is not necessarily Wilfred’s. As the story unfolds we begin to understand that perhaps Marcel/Rodrigo, or even Dominic is not actually owned by anybody.

This book is beautifully illustrated with additional landscape backgrounds reprinted by permission of the Estate of Alexander Dzigurski. The language is enough to keep the attention throughout the story.

“Abby’s book” was the final decision by one 18-month-old. Grandma capitulated by coming home minus one book.