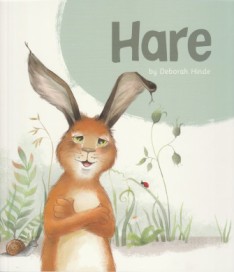 I love this time of year because we have lots of New Zealand books being published prior to Christmas, ready for the Book Awards in the New Year. And what a treasure trove. Deborah Hinde has illustrated over 65 books, but this is her first foray into writing and illustrating. It is a pleasure to pick up such a fun read.

While we all read lots of books with rabbits, or bunnies, the hare has less press. The idea of hare links most closely to the concept of being “harebrained”. Forgetful and disorganised, Hare in this story has forgotten something and needs to visit his friends in an attempt to remember. The encounters include a goose, a rooster, a hedgehog, a rabbit and a duck. Other characters flit through the illustrations, which are bright and clear. Hinde has used these characters to teach about attributes such as soft, noisy and silly. The text and the characters are beautifully matched, both supporting the ideas presented. The ending is funny and unexpected.

I read this to my class, who noticed all sorts of details in the pictures. This is what Hinde does so well. They even picked that she was the illustrator of The Kiwi 12 Days of Christmas which we had read recently.

It is not a harebrained idea to go and buy this book for someone you love. You will both enjoy it.