This is an interesting collection of scholarly articles on the history of Christianity in New Zealand. I think it will be of interest primarily to scholars in the field, but also to those concerned about the apparent decline in religious observance and practice amongst Christians. It’s the work of lecturers and scholars in religious studies at particular universities and bible colleges in New Zealand. There is only one woman in the mix.

I detected a little bit of historical defensiveness, particularly in the chapters on Christian beginnings amongst Maori, and the one on William Pember Reeves. However that serves to make the reader think and consider the work of our major historians.

Various other chapters address the sectarian rivalry of the military chaplaincy during the First World War; the work of two novelists who wrote passionately and from a deeply-held belief in God, but whose works are now largely forgotten. The writer, Kirstine Moffat, comments at the end of her piece “We may not share …(their) beliefs…….but their refusal to settle for the status quo epitomizes and energy and a utopian striving that is admirable”. Perhaps the increasing secularisation and permissiveness of society at large is not necessarily a good thing, but that’s for each reader to decide.

Peter Lineham’s piece on the interweaving of culture and religion surround Christmas observance will be of interest to many readers, as it draws together the various practices which surround Christmas and gives their history – much of it not in the least Christian in origin!

Overall, I think this is a useful addition to work on spirituality and religion in New Zealand. It draws together essays which might not otherwise be easily available to the lay person. I would be very interested to see similar writing on the history and development of observance in other religions in New Zealand.

You just know that any author who begins a collection with a piece about the importance of libraries has his or her head firmly screwed on. So it is with Neil Gaiman, my new superhero.

Actually, the very first piece in this fabulous collection is his credo, and I just have to quote the last sentences, “ I believe that in the battle between guns and ideas, ideas will, eventually, win. Because the ideas are invisible, and they linger, and sometimes they can even be true”.

This wide-ranging collection is divided into ten sections, ranging from personal beliefs and opinions through friends, the art of science fiction writing, how comics work, opinions on music – and all written so that they engage you right away. Even the non sci-fi readers (like me) may be inspired to return to some of the classics of sci-fi to see if our experience stacks up against Gaiman’s. I now have an enormous reading list of things I “really ought to have read” but somehow either did not get around to, or dismissed out of hand!

Neil Gaiman always makes you think – whether it’s his fiction or his non-fiction is immaterial really. A comment at the end of a piece about Charlie Hebdo and the PEN awards is a quote from the editor in chief of Charlie Hebdo: “Growing up to be a citizen is to learn that some ideas, some words, some images, can be shocking. Being shocked is part of democratic debate. Being shot is not”. It would appear that many people out there either don’t know this, or have forgotten. To be reminded is essential.

On a lighter note, a comment about the nature of writing fiction has stuck with me also. To paraphrase – the story itself is not complete until you, the reader, have read it. The writer provides the framework, and of course the narrative, but how each reader interprets that and makes it their own version is what gives life to the story. That makes story even more powerful, I think.

I am going to buy this book, as it is such a great collection. This is definitely the current top of my non-fiction reading list – it just pushed Etgar Keret’s memoir down a notch, and that was hard to do!

The View From the Cheap Seats: Selected Non-fiction
by Neil Gaiman
Published by Headline
ISBN 9781472208019

In Featherston where I live, a debate is underway as to how best to site and build a memorial to remember the tens of thousands of First World War soldiers who were trained in the camp near the village and tramped over the Rimutaka Hill, to ship out to the First World War. (The march is pictured below).

Recently I was approached by a friend’s granddaughter and her friend, both local high school students, for help with a history project based on two local soldiers, trained in the camp, each of whom died in Flanders. I have a lot of books on the war.

These current events are just two of what will be hundreds of acts of remembrance during the WW1 commemorations – but they are local and close to the students and villagers engaged, even if they themselves have no direct connections to the war through forebears. But each is different from the other.

It is the many different facets of remembrance that makes How We Remember, so interesting and worth reading. Editors Charles Ferrall and Harry Ricketts commissioned an eclectic group of writers – playwrights, mainstream authors, journalists, broadcasters and historians to write 20 essays.

The essays, all well written, take many different narrative forms of remembrance which together form a kaleidoscope of multiple reflection on New Zealander’s collective and individual experiences of the war and its aftermath. The book manages to reflect many of New Zealand’s social structures and mores of the time and the effects thereon by the war. 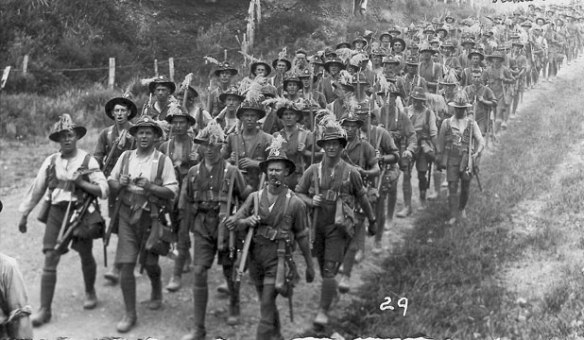 It is difficult to single out any of the essays, because they are all worth reading. However, in order to demonstrate the diversity of experiences, it is worth noting Christopher Pugsley’s tears when he first visited Gallipoli – a place that he has been so instrumental in implanting a sense of respect and nationhood into modern New Zealanders. This contrasts with Paul Diamond’s history of the much honoured, then disgraced and then posthumously rehabilitated gay mayor of Whanganui, Charles Mackay and his blackmailer Walter D’Arcy Cresswell. Jane Tolerton reveals difficulties behind the recording of veteran’s personal histories, exploding perhaps the myth “they didn’t want to talk about it”. And James R Broughton and Monty Souter reflect on the Maori experience of WW1 which includes pride and glory, but also prejudice and injustice.

I have grown up, like so many New Zealanders, with the dictum that New Zealand forged a sense of nationhood within the First World War battles in Gallipoli and the Western Front that lives on. Many who fought though, while from New Zealand, were born in other

countries, particularly Britain. Jane Tolerton writes, that questions were asked of veterans as to ”whether they felt more like New Zealanders, as opposed to British, after Gallipoli. They gave us the clear response that they were New Zealanders already, and proud of it – but also proud of being British”.

The students of Featherston got top marks for their “memorials” of two soldiers. The debate on how best to remember the Featherston camp and those who marched from there to war, will eventually be resolved. And many readers of this book will either have there own personal memories broadened by these essays or gain a fascinating insight into what all this WW1 commemorative stuff is all about.

How We Remember Them, New Zealanders and the First World War
Edited by Charles Ferrall and Harry Ricketts
Published by Victoria University Press
ISBN 9780864739353