As the science reporter for The Press during the Christchurch earthquakes, Paul Gorman was in a unique position to report and observe on this cataclysmic event in Canterbury’s history. Not only was he equipped with the scientific knowledge to understand why the earthquakes were happening, his journalistic instincts also enabled him to ask the right questions of expert scientists and notice (and include) the right details when reporting.

Both strengths are brought to bear on his book Portacom City: Reporting on the Christchurch and Kaikoura Earthquakes, another in Bridget Williams Books’ excellent series of short, highly readable volumes of non-fiction. Portacom City is not just a collection of Gorman’s articles, and doesn’t read as journalism or reporting, though the book benefits form his journalistic efforts. Instead it is an overview of the geological reasons behind the earthquakes; an account of the human impact of the earthquakes; and a finely drawn sketch of what it was like to work for The Press then, trying to report objectively on vitally important stories while also dealing with the emotional and practical upheavals of that time (the book is so named because the newspaper’s staff had to set up office in a network of smelly, cramped portacoms near the airport, their work periodically interrupted by both airplanes and aftershocks).

Certain special details stick in your mind when reading Portacom City. Gorman stands in his kitchen minutes after the September earthquake, shakily jotting down notes on the earthquake on the back of an Ilam School newsletter, the closest piece of paper around. The Press’s social committee is dubbed The Smile Factory—clearly they played a big part in boosting morale. These certain specific details anchor his story and make his experiences somehow more concrete, rather than allowing his account to melt into the morass of earthquake stories we’ve heard many a time since the earthquakes happened. It stops this book from being merely “disaster porn” and makes it real, and engaging.

This is also helped by the scientific lens through which Gorman writes. I found the descriptions of the earthquake history of Canterbury fascinating, proving Gorman’s own point that after the earthquakes, people were hungry for more scientific information about them. It was also highly interesting to read about the stonewalling Gorman experienced from certain expert scientists, and the frustration that ensued. To be fair, Gorman acknowledges the political pressure these scientists were under to not divulge information, for fear of spooking an already edgy Canterbury public. It hadn’t occurred to me that such stonewalling had happened at the time. Fascinating, and disturbing.

Gorman’s writing is punchy and he has a gift for describing concepts in succinct, engaging ways. This, and the unique science communication angle of this book, makes Portacom City fresh and compulsively readable. An eye-opening and compelling read.

Last year’s Kaikoura earthquake was one of the most powerful we’ve experienced in recent years, and there have been a few startlers since Christchurch 2011. But it’s an environment we choose to live in because New Zealand is wonderful, and New Zealand is home.

Each major earthquake we have, we learn more about how to react and what to do, but deep down we know we may never be sufficiently prepared for the aftermath of a really big earthquake.

What we can do is continue to learn from the earthquakes we have experienced, study how the days after play out, what’s important and what’s not, and what we need to stay safe and be there for one another. Being brought to think about this is one of the main reasons I enjoyed reading this book.

Surviving 7.8 is Radio New Zealand (RNZ) journalist Phil Pennington’s account of the immediate aftermath of the Kaikoura earthquake. As one of the first people on the ground in Wellington, then in Kaikoura, Phil shares a fascinating account of the results of a complex earthquake.

Phil walked the dark streets of Wellington shortly after midnight on the 14th of November, reporting live as he witnessed the glass littering the streets and confused and upset people milling outside apartment buildings. The RNZ team found helicopter transport to Kaikoura, only to come across empty main streets, land ripped apart, giant slips cutting off main highways and every road out of Kaikoura rendered impassable by boulders and deep fissures.

Phil found the heart of the town with the people gathered together in local marae and open domains, he talked with many of the city’s inhabitants too shaken to return to their homes. Surviving 7.8 covers many interesting personal accounts of the earthquake and there are plenty of heart-warming stories of people who stepped up and helped with food, water, transport and care.

The book isn’t a definitive study of the Kaikoura earthquake, it’s an excellent account from Radio New Zealand journalist who found himself telling the stories of the people affected to the nation and the world they were cut off from. Surviving 7.8 is a very interesting read, and well-recommended.

The Christchurch earthquakes form the basis of this beautiful piece of writing. Kathleen Gallagher shapes her novel around the life stories of a cluster of people whose lives crisscross like the fault lines under the city. This is not a simple retelling though. Rather, it is an extended elegy on life, death, friendship and survival. The links to the land and the ancestors of this place begin each chapter, tying the story closely to Maori mythology and the spirituality of place.

The story works on so many levels. Yes, there is a basis on events which is elucidated through exquisite details…”they move slowly along beside split open, partly falling buildings, past the trees still standing as if nothing had happened, along Bealey Ave, where the big brick homes of yesteryear have their chimneys fallen through, their walls askew”.

But the people stories are what I loved the most. They are heartbreaking and tragic but hope flits on the edges, moving the story forward. The way strangers help unasked, generosity is freely given and shelter is for sharing.

It is wonderful to see such a prosaic tale arise from the rubble. The photo books, the kid’s stories, the building stories have been told. But here is a piece of literary writing which weaves together all these elements. Photographs of details from the city begin each chapter and are themselves mini masterpieces with their own tales. Gallagher has a close connection to the events and I struggled at times to read such clear expressions of my own experiences. It all came back; the fear, the loss, the humour and the uncertainty of each day. This book has captured it all. I am grateful for her vision, her compassion and her talent in producing this taonga. 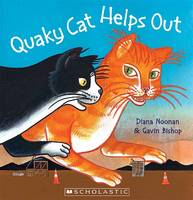 Quaky Cat has appeared in an earlier picture book by Diana Noonan. This book was written in response to the Christchurch earthquake and has raised more than $150,000 for Christchurch charities. All author royalties from this book Quaky Cat Helps Out will go to supporting the work of Orphans Aid International.

Diana is an award-winning author of more than 200 publications including young adult novels, picture books, non-fiction, poetry, stories for radio, material for television and short film scripts. Gavin Bishop is an award-winning New Zealand children’s author and illustrator. He has published more than 40 books.

The dedication at the back of this book –

“In memory of the Canterbury earthquakes of 2010 and 2011, Quaky Cat Helps Out is a tribute to the brave children and families who have opened their hearts and homes to help a broken city”.

Tiger the ginger cat can’t sleep. He feels uneasy but doesn’t know why.
It’s six in the morning, and Tiger can’t sleep.
He tosses and turns at his friend Emma’s feet.
It isn’t the cold that keeps him awake,
Or the shudder and rumble and bump or a quake.

Even though his house and surrounds are mended after the Christchurch earthquakes in 2011 he just can’t settle. Things are not what they seem. A number of cats have lost their homes. Tiger goes around issuing invitations to his displaced friends to come and settle at his and Emma’s house.

This is a fabulous story with lovely illustrations. I had to be very careful reading this story to 4-year-old Abby as she has a rather overactive imagination. We have to be very mindful when the television news is on that she doesn’t hear about a house fire or about any sort of crime. She has a lot of questions about things and broods on them. This isn’t unusual for this age group, but sometimes you have to be careful when broaching different subjects i.e. earthquakes.

Abby did respond very well to this story and was totally engrossed with Tiger and his friends and how they all came to his and Emma’s house. We also talked about sharing and how it’s really good to be nice to people when something bad has happened to them. It’s hard to explain an earthquake to a child that has no concept of what an earthquake involves – it’s hard enough for an adult who hasn’t experienced them first hand either. Abby has two cats of her own, so came up with some good suggestions about what you could do to make sure the cats were safe.

At the back of this book there are comments from children that lived in Christchurch during the quakes.
“Just like Quaky Cat’s friends, my house got cracks and we had to get a new floor. We had to live in a caravan…..our house is still getting fixed from the earthquake.”
– Regan, age 9