Diana Wichtel, a long-time TV reviewer and journalist, has just won national awards for her first book, Driving to Treblinka, about her search for her father. From the publisher’s blurb: ‘Diana Wichtel was born in Vancouver. Her mother was a New Zealander, her father a Polish Jew who had jumped off a train to the Treblinka death camp and hidden from the Nazis until the end of the war. When Diana was 13 she moved to New Zealand with her mother, sister and brother. Her father was to follow. Diana never saw him again.’

We always used to get the Listener in my house growing up, and I always used to save up Wichtel’s column to read: she was my favourite. I had previously attended The Art of the Critic, where she was the panellist who spoke the least. In my review of that session I mentioned I was puzzled by the way she seemed to speak poorly of her own work. Chair Jeremy Hansen cleared this up straight off the bat: ‘You’ll probably see as we go along that Diana suffers from chronic modesty’.

Hansen was a good chair, asking interesting questions and drawing Wichtel out without pressuring her. She was a quiet presence on stage but she had a mana about her that drew us in. After thirty years of reading her funny, incisive columns, I had thought Wichtel must be a loudly hilarious person. As the session went on, I began to realise that all that time she was carrying a weight of absence, guilt, and unresolved grief.

Wichtel grew up in an atmosphere of not looking back. Her mother shut down conversations with instructions not to upset your father, but looking back, Wichtel wonders whether he might have liked to have spoken about his wartime experiences. ‘The real problem was that no one wanted to listen.’ After he didn’t turn up in New Zealand, a teenage Wichtel was told there was nothing they could do and no way to contact him. She now realises there probably was, and this rearrangement of the narrative of her life has been disruptive and painful.

Wichtel didn’t find out her father had died until several months after the fact. She was a young woman, flatting in Auckland with her sister. There was no funeral, none of the normal processes of bereavement. ‘His death fell into a silence.’ He was just gone, like his family during the war. After that, Wichtel says she drifted. The world felt absurd. It wasn’t until she had a child of her own that she came back to herself. ‘Having a child, you can’t really deny you exist after that because there’s the proof. Without any thought at all I named my son after my father.’ She says she doesn’t judge her mother for what she did: ‘I can’t judge either of them for anything because of the hard lives they had to live. The book has taught me there’s always another story.’

Wichtel’s book details the process of trying, as an adult and an orphan, to figure out what happened to her father. ‘Going back into the past was a very hypnotic and magical thing to do.’ The past is a haunted space, ‘very seductive and painful’; a parallel universe running alongside our own that we can dip into. ‘I want to stay in the stream of history because that’s where I have contact with my family.’ She has visited the remains of the death camp at Treblinka, and says it is ‘dispiriting in the extreme’ to see the current rise of anti-Semitism.

If we had expected that writing the book would bring about some kind of neat emotional resolution for Wichtel, we were wrong. ‘There’s no closure and I don’t want there to be. I’m happy to sit with the guilt – it’s the least I can do.’ It was an extraordinary note to end my 2018 Auckland Writers Festival experience on.

AWF18: The Art of the Critic, with Charlotte Grimshaw, Alan Taylor and Diana Wichtel

To the chair, Dione Joseph, who began and ended this session in beautifully spoken te reo: ngā mihi nui ki a koe. It was a real pleasure to hear you.

The upper NZI room was packed out to hear Joseph chair a discussion with Diana Wichtel, Charlotte Grimshaw, and Alan Taylor about the art and practice of criticism. Wichtel is a long-time TV reviewer for The Listener who has just won a national book award; Grimshaw writes and reviews fiction; and Taylor is the editor of the Scottish Review of Books. 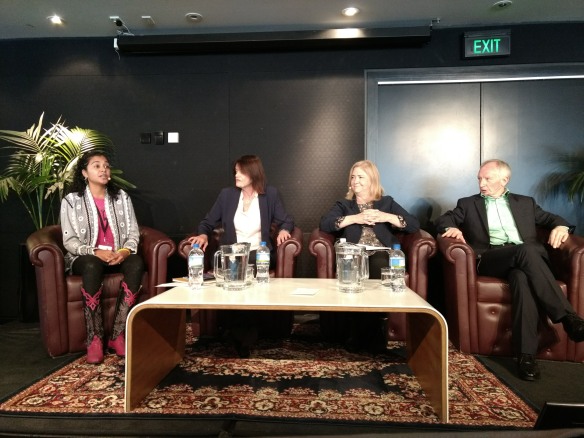 Wichtel said that a review has to be a thing in itself; something interesting to read. I was surprised how down she was on TV reviewing, given how good she is at it: ‘I don’t think anyone’s going to claim that a TV review is art’. (Taylor disagreed, as I would too.)

Grimshaw said she used to do real hatchet jobs on books she disliked: ‘A huge amount of what you read is absolute shit – I had this mad idea that people would be grateful to hear the truth’. She said that Kiwis refusing to review local literature for fear of backlash is
‘understandable but not laudable’.

There is always a danger with this kind of session that it will devolve into a moan fest about how the internet is killing ‘proper’ culture. It is undoubtedly true that there is less space for cultural criticism in the mainstream media and that reviewing as we have known it is in danger of becoming a dying art. I myself know very well how hard it is to earn any kind of living as a critic: Steve Braunias recently did a run-down at The Spinoff of how much book reviewers are paid in Aotearoa. (Spoiler: not much.)

The chair tried to keep things upbeat and future-focussed, but the person who ended up talking the most was Taylor. The list of things he dislikes includes but is not limited to:
Young people
Young people who write books
Books written by young people
Sentences that lack “cadence”
Books written by JK Rowling
The 44 Scotland Sreet novels (actually I agree with him on that one)
Genre novels
People who write genre novels
People who have opinions that have not been culturally sanctioned
Celebrities
John Bayley’s memoirs about Iris Murdoch
People who judge the Booker Prize these days (not like when Taylor did in the 90s)
People who enter the Booker Prize these days, especially Americans
The Booker Prize these days
Writers who persist in being alive when everyone knows all the “greats” are properly dead
Writers who put themselves forward instead of remaining in morally incorruptible seclusion
Writers who appear in literary festivals, thereby proving they have no goddam self-respect
People who make him feel old by persistently being younger than him

(In Taylor’s defence, I must note that when I went to chat to him afterwards he was perfectly nice to me, despite my (relative) youth and incurable habit of putting myself forward, and gave me some valuable career advice that I will be following. Kia ora Alan.)

At one point the chair pointed out that the panel comprised three women including a woman of colour and one man, and invited the panellists to reflect on diversity and privilege. Unfortunately this discussion didn’t go very far.

I would have been interested to hear more on that topic, and on the reality that, as so much of reviewing is paid either poorly or not at all, we are at risk of only hearing from people rich enough to be able to write for free, thus losing valuable perspectives. Joseph also asked the panellists how we can support the next generation of critics: I was poised to take detailed notes for my own career, but unfortunately, again, there was no real answer. In Scotland they have a mentoring programme for young critics that sounds wonderful. If anyone from Creative New Zealand is reading: let’s talk.

I got up at the end and asked the panel to recommend their favourite critics to read. Here is the list for your reading pleasure: Andy O’Hagan, Ali Smith, James Wood, Anthony Lane, Elizabeth Hardwick, Clive James, AA Gill, Grace Dent, Nancy Banks-Smith, and The War Against Cliché by Martin Amis. I’d like to end by echoing Taylor’s remark: readers have power. If you’d like to see more and better quality reviewing in our media, get in touch with the editors and tell them so.

And if anyone would like to review my review of the reviewers, I’m all ears. Kia kaha.

Other events that participants are in:

Charlotte Grimshaw is in:
Disappearances 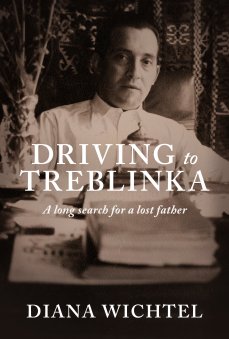 Imagine saying goodbye to your father in Canada, expecting him to soon follow your family to New Zealand, and never seeing him again. That is what happened to Diana Wichtel and it’s something that had a profound effect on her life.

Wichtel grew up in Vancouver, Canada, with her brother and sister. Her mother was a Catholic New Zealander, her father a Polish Jew who survived the Holocaust. When Wichtel is 13, her mother returns to New Zealand and she is told her father will follow them later.

Her father never arrives and the family eventually moves on without him, but Wichtel often thinks of him. The years pass and finally she decides she has to know what happened to him.

Driving to Treblinka is the story of her search for her father, but it is so much more than that. It is a story of courage, hope and survival in the face of cruelty and terror. It is the story of a family torn apart by war and the actions of the Nazis, and what survivors had to do to stay alive.

Part historical memoir, part search for anything that could shed light on her much-loved father, Driving to Treblinka is one of the most moving books I’ve ever read. Most of us take life for granted, but those who lived through the Holocaust had to fight for everything, expecting it to be snatched from them at any moment.

This book will make you smile as you read the stories about family life that are so familiar and heart-warming, but it will also make you cry – and possibly make you angry – reading about the millions who needlessly lost their lives during the Holocaust.

Wichtel’s father may have been seen as lucky because he survived, but often surviving is harder because it means living with the past every day of your life.

The search for her father is all consuming for Wichtel, but with the support of her extended family she learns more about his life and what happened to him after the family moved away from Canada.

I have always enjoyed Wichtel’s writing and this book is all the better for her sensitive handling of it. It is funny and sad, and it’s hard to accept what Benjamin Wichtel had to endure and what his daughter went through in order to find him and tell the story of his life.

Driving to Treblinka is an excellent book that deserves to be read and talked about.  In the weeks since I finished it, I have often found myself stopping and thinking about Benjamin and his family and the love that bound them all together.

Driving to Treblinka: A long search for a lost father
by Diana Wichtel
Published by Awa Press
ISBN 9781927249406