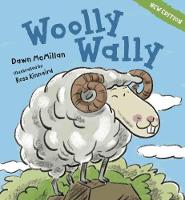 If you are familiar with Doctor Grundy’s Undies, I need a new Bum and other stories, and Mister Spears and his Hairy Ears, you will adore this offering from Dawn McMillan and Ross Kinnaird. What a great book. Woolly Wally was first published in 2006 and is now back in this latest edition.

Woolly Wally was a ram who stood master of his flock, full of importance, ready to show off his beautiful wool, thick and crinkled, extra fine, grey and wrinkled.  He was sure that his perfectly formed, uniquely shaped, individualised, spiral, ribbed and oversized horns were absolutely perfect and that he as incredibly handsome.  He was also sure that all the sheep were in love with him and that when spring came all the ewes would be mums and the fields full of his perfect offspring, so what a shock Woolly Wally got when he heard the word “shear”.

A wonderful story with a great moral. Pride comes before a fall, and in Wally’s case he falls far.

As with all books that Dawn McMillan and Ross Kinnaird have collaborated on, small readers will not be disappointed.  My 3 ½ year old granddaughter Quinn had it packed in her bag ready to go home before I could turn around.

We are introduced to Charlie by a young boy who is interested in becoming his new owner. We then hear about all the amazing adventures and abilities of Charlie from Charlie’s own mouth; from his days as a spy and saving people from fires and floods to his talent for singing, selfies and bathroom manners. All this on top of being a talking dog!

Of course the boy is amazed at all Charlie’s tales and wonders how this dog could possibly only be worth $10… this is where the twist comes. Upon inquiring about Charlie to his present owner the boy finds out the truth about Charlie; while Charlie is amazing at sharing his tales that’s all they actually are, tales. In reality Charlie the dog is just a dog. He hasn’t been around the world on crazy adventures nor has he saved lives. In fact he spends most of his days in the yard. However, the young boy, though disappointed in Charlie’s lying, still buys Charlie despite all this.

Rhythm and rhyme are so important towards children’s language learning and it’s always great to find a story that does both really well. Charlie and his amazing tales has a wonderful rhythm and rhyme to it that makes it really seem like it’s coming from the mouth of an excited dog. Children will find humour in the exaggerated stories that Charlie the dog tells and it could possibly get their own imaginations flowing!

As well as being a humorous tale this story has an important message about being yourself and accepting others for who they are. Charlie didn’t need to make up amazing tales about himself because he is amazing just the way he is (he’s already a talking dog!).

The bold and brightly coloured pencil illustrations suit the story and Kinnaird has managed to portray movement and expression amazingly in each scene. I enjoyed finding all the extra little details on each page, especially the appropriately placed Easter egg of the book Doggy Doo on my Shoe also by McMillan and Kinnaird.

Charlie and his amazing tales is a fun and imaginative story with an unexpected twist that addresses the importance of being yourself and also accepting people for who they are. But perhaps most importantly, children will enjoy the exciting story and illustrations of this book. 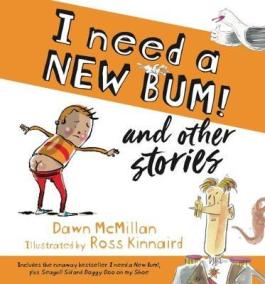 I need a New Bum is a much-loved story by New Zealand author Dawn McMillan and illustrated by the great Ross Kinnaird.

I am ashamed to say I haven’t had the pleasure before now of reading this to grandchildren. I was pretty excited to have this recently published book in my hot little hands.

For those of you who don’t know I need a New Bum, what a treat is in store for you. This little boy has discovered he needs a new bum, as he thinks he has damaged his. He’s got a crack in it – he saw it in a mirror. He tries to figure out how he did it, and so the story carries on. It’s a hilarious story that will totally appeal to any small child – up to the age of 5 or even 6 years old, I would think.

I read this to Quinn 3 ½ years old. She loved it but then she is at an age where anything to do with bums and poo and farts is excellent.

The rest of the stories will also enthral small children. Seagull Sid and the naughty things his seagulls did! Incredibly funny story with his mates getting their own back on people so that they could scare them away and get on with eating their chips.

Then there is Doggy Doo on my shoe. We all know what that smell is like and how it’s a case of trying to work out where the awful smell is coming from and who is responsible.

A fabulous book and with Christmas shortly upon us a great book to pop in a small person’s Christmas parcel.

Who’s this in our house, munching toast and cheese? Squeakopotamus! Is he a hippo that looks like a mouse? Or is he a mouse too big for this house?

What will Squeakopotamus do when he has run out of things to eat – will he eat us? Is he a hippo? Or is he a mouse? And will the children be able to keep him?

This is such a gorgeous book with stunning illustrations. Quinn, my youngest granddaughter is 2 ½ years old. I read this to her before she had her mid-morning nap. Her eyes got wider and wider at Squeakopotamus’s reactions and of course she wanted one just like him. No such luck – she’ll have to be content with her dog Mini, a rescue greyhound and her cats, Gus and Rocky.

Dawn McMillan as the author and Ross Kinnaird as the illustrator of this book are already know to our family through their wonderful collaboration in, I need a New Bum, Doctor Grundy’s Undies and Mister Spears and his Hairy Ears –all great favourites.

When Carlos finds Uncle Jack’s harmonica ‘in a dusty old box tucked back against the wall shadow’ of the attic, he knows he has found a very special thing indeed. His mother has told him about the music Uncle Jack used to play with it, and it seems the harmonica is waiting to be played: ‘He heard the music, barely a sigh but it filled the attic with a promise.’

Carlos begins to teach himself how to play using the sounds of nature as his guide. He starts off quietly at night in his bed and slowly learns the song of the moon, the storm and the wind and rain. Keeping the harmonica a secret for now, he draws more inspiration from the grasses and crickets ‘he sat up and added the sway of the trees’ until one day he is ready to share his secret with his mum. She is delighted to see the harmonica and says she wishes he had been able to get to know his Uncle Jack; to which Carlos replies that he has met him in the music – a beautiful and poignant message. The story comes full circle as he plays his harmonica to the hills beyond, just as Uncle Jack did.

Set in New Zealand’s rural landscape and featuring a boy and his faithful puppy, Andrew Burden’s natural and almost dreamlike illustrations work perfectly with Dawn McMillan’s gentle lyrical prose. Carlos’s connections to nature and his Uncle are reinforced through the harmonica, as Carlos breathes life into it, so too does he bring Uncle Jack’s memory to life. The music imagery is presented so well in the text and illustrations that you can almost hear the harmonica playing.

The subject matter of a soldier who has been killed in service is a serious and important one to tackle for a children’s picture book, and The Harmonica has handled it respectfully and sensitively at a level that is appropriate for young children. Uncle Jack’s death is implied without the need for detail that could be unsettling. While we can guess at where he was serving, more important is the scene showing Uncle Jack sharing his music with his troop; this moment of bonding and closeness is surely what the ANZAC spirit embodies.

The Harmonica will be a welcome addition to school resources, linking history to current day for ANZAC learning. Dawn and Andrew have created a moving modern day ANZAC story which gently reminds us all that our service men and women continue to do their duty and serve our country. And that not all of them come home.

Dawn McMillan is a New Zealand author, living on the Coromandel Peninsula. She has previously published together with Ross Kinnaird Why Do Dogs Sniff Bottoms?,“Woolly Wally and I Need a New Bum.

Ross Kinnaird is an illustrator and graphic designer living in Auckland.

Doctor Grundy was hanging out his undies on his clothes line; new undies in a larger size with tiger stripes and tiger eyes, when the wind blew and the wind blew with them flying into the sky. They flew over the trees, over the hedge, along the beach, over the quay and out to sea. They land on a pirate ship with fighting over who would have them to wear. The Captain won and so he washed them and hung them out to dry. The wind blew, the wind blew and the undies fluttered high. And so the story continues with the adventures of Dr Grundy’s undies and the places go.

What was so lovely about this story was the wonderful use of descriptive language to keep a small person interested. I did laugh at the illustration on the title page; Made in New Zealand with care instructions and XXL sizing – a lovely touch. All small children love words like LUCKILY and know all about favourite bits of clothing. The small child I read this to at the moment has a favourite pair of lace socks that she insists on wearing with everything to the amusement of others.

This is a fabulous story and the illustrations are very amusing. Reading a lot of books to small people in the family, it is also lovely to find a book that is wonderful to read out loud. The change of voices with the characters and actions that the reader can input into this story, make this just one great book.