Laini Taylor is one of my writing idols. When her attendance at the WORD

Christchurch festival was announced I was absolutely delighted. I would like to think I was among the first to purchase my ticket for this event − in which she and Elizabeth Knox discuss the supernatural world of Young Adult writing. This discussion was hosted by local speculative
fiction writer, Helen Lowe.

I enjoy the panel-style format such as this, where it rather resembles a friendly discussion, to which I am a welcome eavesdropper. The camaderie between Elizabeth, Laini and Helen was open and friendly, and it was
wonderful to see that each participant was familiar with the other’s
work. Neither dominated the discussion and comments bounced back and
forth in a lively, animated manner.

Helen’s questions were insightful, both to readers and aspiring authors. She began with asking why they create supernatural/fantastic worlds – in which Laini admitted to tricking people into reading high fantasy (her Daughter of Smoke and Bone trilogy starts from an urban fantasy
perspective). Elizabeth attributed it to her older sister, who made the world magical. Other topics took us through the laws of magic, the hero’s journey trope (which

neither author follow consciously), and other such popular Young Adult themes as strong female characters, insta-love and love triangles. Elizabeth Knox (left)  described the latest trend towards paranormal romance as “the cuckoo laid in the nest of fantasy”.

I also learned that the Daughter of Smoke and Bone series, one of the
best I have ever read, began when Laini was seeking relief from a
challenging novel and began with free writing and discovery of the
characters of Karou and Brimstone. Certainly a most serendipitous
occurance, and one that I (and I imagine many others) am most grateful
for. Writing a novel, she informed us, is a little like swimming from
buoy to buoy, capturing spontaneity in short bursts.

Overall, a very rewarding discussion that both intrigued me as a reader
and inspired me as a writer. I could have listened to the two of them
all day!

by Angela Oliver, writer, artist and reviewer for Booksellers NZ

GIVEAWAY: We are giving away the first two volumes in this trilogy, on our Facebook page. 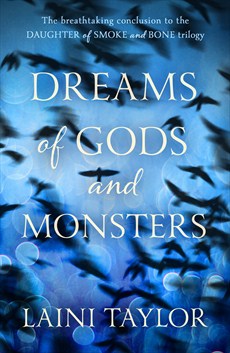 in 2011 with Daughter of Smoke and Bone. It is a beautiful book: dark and haunting with eloquently writing and an original twist on the whole angels vs demons theme that was attaining popularity in the time. I was hooked, devouring it within days. The second, likewise, kept me hanging on to every word, savouring the delicate bouquet of the prose, with my hands shaking in anticipation.

So, you might say that I was rather looking forward to this, the final, instalment.
And I am pleased to say, it did not disappoint.

The trilogy begins in Prague, Czech Republic, with blue-haired Karou and her feisty friend, Zuzanna. Karou divides her time between drawing strange and distorted creatures in her sketchbook – creatures that may be real – and running mysterious “errands” that take her across the world. There is more to her than even she knows, and when a beautiful stranger fixes his fiery eyes on her, the dark threads will begin to unravel.

What begins is a tale of a war that has spanned countless generations: a war of treachery and violence between two ancient races. A war in which Karou holds the key to redemption, but first she must find herself.

I do not wish to say much more, for too much information will give away a plot that, I feel, is richer to experience than be told. So instead, here is the tagline from book one, which says all you need to know, pre-reading, really:
Once upon a time an angel and a demon fell in love.
It didn’t end well.

If you have not read the first two books: Daughter of Smoke and Bone and Days of Blood and Starlight than I do not recommend you begin with this volume, as you would only be letting yourself down. Find the first one, engulf yourself in the prose, enjoy the wry humour, the clever quirks of the characters (you’ll love Zuzanna, believe me) and the impressive scope of the author’s imagination. Allow yourself to be swept away, first through the exotic streets of Prague and then further still, into worlds you could not dare imagination.

Through the second, your body will be racked with tension, nails digging into your palms and trying to squeeze back the tears that threaten to leak from the corners of your eyes. It is a dark book, haunted with melancholy and more than a little angst, but no less exquisite for it.

But be grateful, for unlike me you do not have to wait – the third, and final, book is here and waiting for you. And it is majestic in scope. All the characters you love are there; you will laugh, you will cry. And you will not be able to put it down.