This session was on Saturday, 20 May, at 3.00pm at the Auckland Writers Festival

The first time I heard of Chris Kraus – and of her book, I Love Dick – was around 2011, when I was working in an academic bookshop and one of the postgraduate English courses had it as a set text. We unprofessionally giggled at the title, this book we weren’t at all familiar with.

In the last few years, it seems to have blossomed in popularity – it’s suddenly on the shelves of other indie bookshops, not just where required by one lecturer. And this year, news of a television adaptation broke – only adding fuel to the fire of people buying, reading, talking about I Love Dick. So it was that Chris Kraus’s session was scheduled for the main stage, the ASB Theatre. 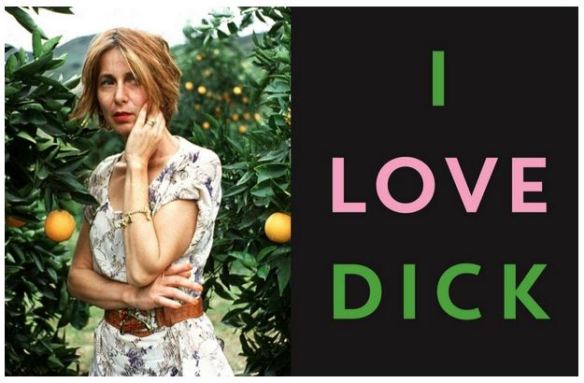 Chris Kraus is, or has been, a writer, a journalist, an artist, a filmmaker. She has, as Kevin described it ‘juggled many careers’. She has authored several books of non-fiction, and several novels ­­– including the trilogy that starts with I Love Dick then leads into Aliens and Anorexia and concludes with Torpor.

Prior to really engaging with conversation, Chris took to the lecture for her first reading – from the recently reissued Torpor. The main characters relationship was succinctly summed up in one passage: ‘Faithful to their distrust of each other, they are celibate’.

The setting of these novels was described as ‘post-MTV but pre-AOL’ – a little US-centric but still managing to appropriately convey their place in time. ‘History becomes a character’, Kevin said.

Chris described Torpor as ‘a much more personal book [than I Love Dick]’, with a more in-depth approach to the lives and the histories of those characters. ‘In I Love Dick, the characters could almost be anyone. They’re almost like commedia dell’arte stock characters.’

‘High intellectual sex comedy’ was one description of I Love Dick, while the format of the book was described as having ‘the letters as evidence, the whole book as a case study’. But, despite the overlap in the names of the characters and of Chris and her then husband, and certain aspects of the story being lifted from true experiences, it’s certainly not a memoir – and Chris would never have wanted it to be. ‘I’ve always found memoir kind of… icky. It’s not something I would ever want to write myself.’

A more recent project of Chris’s has been a biography of Kathy Acker. She described the book as a career biography, rather than ‘cradle to grave’ – taking the chance to really get inside her work, rather than take a more psychological assessment of the entire life of the subject.

Kevin asked Chris about ways in which her filmmaking background prepared her ‘for a life in fiction writing.’

‘I don’t know how much it prepared me – but when I was working, I would always pull the blinds down, so it was dark – like I was transcribing a movie.’

They also briefly discussed Gravity & Grace, a film Chris created in New Zealand in the early nineties. While she is American, Chris spent several years in her teenage years and early twenties living, studying and working here, before returning to New York. For Gravity & Grace, she returned to New Zealand – and though the film wasn’t successful on release, it has seen a resurgence in interest in the years since. This is something that Chris is quite content with – ‘If the film had been successful on release, people wouldn’t be so interested now.’

On the audiovisual side of things, the topic of the I Love Dick adaptation was brought up – specifically the all-female writers’ room. While Chris is not involved in the project directly, she expressed her ‘total trust’ in the writers. ‘And most of the episodes in the first season are directed by women who had previously directed independent films.’

Virtually all authors self-identify as passionate readers, and Chris is no exception. She referenced Nicky Hager’s 2009 title Secret Power when discussing her memories and missings about New Zealand. And she talked about having saved up Dostoevsky for the proper occasion – and that this trip was it. ‘All these plane rides, instead of playing video games, I’m reading these books.’ She described the book club, of sorts, that has been woven between flights and different places on the globe – all these people she’s encountered who have also been reading Dostoevsky.

There was more, of course – you can never capture everything. She talked about her experience as part of the St Mark’s Poetry Project, and of her work at publisher Semiotext(e). It was an illuminating session, with plenty of live reading from the author – leaving the audience ready to jump into a Chris Kraus title or perhaps leaving the more widely read among the crowd even more excited for the forthcoming television show.

Attended and reviewed by Briar Lawry on behalf of Booksellers NZ

Wellington people: Go and see Chris Kraus on Monday 22 May at City Gallery!

First published in 1997, I Love Dick was a landmark publication in the world of feminist literature, cleverly mixing memoir with fiction to create what the author called “lonely girl phenomenology”, and what the critics call “radical” and “gossipy”. The public loved it and I can totally see why.

The Dick of the title is a man – a sociologist and media theorist who dazzles the author throughout the book, captivating her like a shiny thing catches the eye of a kea. As time passes and she negotiates her way through the art world with her husband by her side, she encounters various movers and shakers some real life figures, some not, some possible “names changed to prevent a law suit”… And always Dick.

There are undoubtedly some disturbing aspects to the book. The idea that a married woman would “crush” on a single man, who seems uninterested to the point of asking her to leave him alone, and convinces her husband to help pen letters to him seems cruel, possibly fantastical. Does she love Dick that much or is it the idea of Dick? Of what he represents?

Sharp eyed and sarcastic, Kraus spares no one, least of all herself, brutally dissecting the feminist movement of the 90s, both within the academic world and the fickle arts scene where individuality is heralded as new and brave, but only if it can be marketed in an acceptably formulaic fashion.

A performance artist on the rise, married to a successful man, her feminist world view takes on a distinctly Dick-shaped lens, one she’s aware of but unsure whether it’s a gift or a handicap in a post-modernist world.

And who is Dick? Is he a real person? And what really happened between the author, her husband and Dick?

Dick’s real identity is now known – but don’t go searching for it until you’ve read this book. Reading it for the first time is something to treasure. The fact it’s not as well-known as non-fiction feminist texts is a shame, a crime! This is a book every independent, intelligent woman (or man who likes them) should read. It’s not fluffy. It’s certainly not a beach read. But it’s witty, satisfying and good for the soul – like a night out where the wine is as good as the conversation and you know your plan to take over the world is solid.

I’ve added I Love Dick this book to my “Annual Read” list. So should you, because I think you’ll love Dick just as much as I do.