The finalists in the Ockham New Zealand Book Awards have now been announced, giving readers 16 fine books to take a second look at, and consider among the best New Zealand books ever produced. The judges had an unenviable task, with 18 months worth of submissions considered, and of course they haven’t chosen everybody’s favourite books (wherefore no The Chimes?) , but it is a pretty fine list nonetheless.

Click the title you are interested in below to read a review, either on our blog, or if we haven’t yet had it reviewed, in another extremely reputable place.

Enjoy these wonderful New Zealand books and share them far and wide.

The Ockham New Zealand Book Awards are supported by the Ockham Foundation, the Acorn Foundation, Creative New Zealand and Book Tokens Ltd. You can find out who the judges are here. The winners (including of the four Best First Book Awards) will be announced at a ceremony on Tuesday May 10 2016, held as the opening night event of the Auckland Writers Festival.

The awards ceremony is open to the public for the first time. Tickets to the event can be purchased via Ticketmaster once festival bookings open on Friday 18 March. Winners of the Acorn Foundation Literary Award, for fiction, win $50,000. Winners of the other three category awards each receive $10,000, the Māori Language award $10,000, and each of the winners of the three Best First Book awards, $2,500.

“Who’s he’s mountain?” asks an old Maori elder in Patricia Grace’s new novel. He’s asking these questions about Chappy, a mysterious stowaway, apparently from Japan, who has landed in 1930s New Zealand and been taken in by the Maori seaman who found him. “Who’s he’s river?” old Uncle Jimmy asks. “Who’s he’s ancestors? Who’s he’s name? Who he is?” It is these questions that drive this novel, as, eighty years later, Chappy’s grandson, lost and troubled Daniel, travels back to New Zealand from Europe in search of the mysterious grandfather he never knew and, indirectly, in search of his own roots.

Chappy is skilfully and effortlessly woven together by Grace. Though Daniel’s voice occasionally pops up, the majority of the novel is an interlacing of narratives from Aki, the Maori seaman who took Chappy in, and Daniel’s great uncle, and Oriwia, Daniels’ no-nonsense, practical, sometimes bolshy grandmother, and Chappy’s wife. Alongside this narrative interweaving stands a cultural interweaving too. Different languages—Maori and English, predominantly—slip and slide alongside each other, and, though Chappy is undoubtedly a New Zealand novel, like its characters, it wanders the Pacific, with significant sections set in Hawaii and Japan. As Oriwia tells Daniel, “You can be anywhere in the world, but you have a tūrangawaewae that cannot be denied you.”

I enjoyed the expatriate or wandering flavour inherent in this novel; overseas travel has always been a part of New Zealand experience, from the twenty-first-century OE to the twelfth-century voyages from Hawaiki, and yet previous great Kiwi novels haven’t , in my opinion, often included that journeying spirit. Grace however manages to express this international aspect without sacrificing this feeling of Aotearoa as tūrangawaewae—its characters’, and our, place to stand.

It’s significant then that both Daniel and his grandfather Chappy enter the novel rootless, without a place to truly call home. Chappy stows away on a ship and, though he comes to consider Aotearoa as home, this home eventually turns on him, as might unfortunately be expected in 1940s New Zealand when dealing with a Japanese immigrant. It was fascinating and sobering to read the sections describing Pearl Harbour and the hardships German and Japanese-born Kiwis endured during that time. Chappy also spends time living in Japan and in Hawaii, torn from his wife back home, and still living a life that seems somehow incomplete or impermanent; several times he’s compared to a ghost. In fact, Chappy remains a mystery—though we learn more about him, he remains oblique and unreachable. Daniel, however, is luckier. His quest to discover his grandfather leads him in turn to understand his own roots.

“Who’s he’s mountain?” Uncle Jimmy asked of Chappy, and though Chappy’s answer to that remains unknown, it’s clear that Daniel’s search has brought him closer to understanding who his own mountain, river and ancestors are. This immaculately written New Zealand novel thus tells a universal story—the search to find your self—and is utterly absorbing and beautiful. Very highly recommended.

Two greats of New Zealand, and particularly Maori, literature – Witi Ihimaera and Patricia Grace (right) – sat down for a chat in front of a nearly full St Paul’s Cathedral on Saturday. Both are well known for their work being written from and expressing a Maori world view, so it was interesting to see that Ihimaera’s first question was about Grace’s Irish background, and why she hadn’t written a lot from that point of view. As it turns out, she had written a few from that point of view, especially early on in her career, but no one seemed particularly interested in publishing them. It wasn’t until she started writing from the Maori point of view that her writing career came to fruition – curious, since both Ihimaera and Grace encountered resistance from publishers regarding publishing their Maori-focused work. Perhaps this was more because the Maori point of view made up a larger part of her ‘voice’.

Grace talked about the impact of Frank Sargeson’s work early on in her career, and how she could hear ‘that Kiwi voice’ in his stories and then realising that writing came from within and that it was about finding one’s own voice. She was also aware that, in writing the Maori existence, she was writing about people that at that time had never been written about before. An interesting point to note was that one of the main themes in her work was the importance of land, and the fact that many of her (Pakeha?) readers may not have realised that land issues were part of everyday Maori life. This struck a chord with me – every life has details in it that are perfectly ordinary to the person living it, but are totally foreign to others, and often that ordinary/extraordinary disjunct happens across cultural boundary lines. 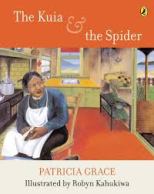 race was a teacher for a long time, and I could sense that old teacherly concern when she talked about The Kuia and the Spider, her classic picture book, and the circumstances that inspired it. She had noticed, as a teacher, that “it was not good to be brown or black in children’s literature” – she asked the audience rhetorically, “Where was the Maori child […] being legitimised in literature?” – and that the kids she was teaching didn’t relate to stories with European settings. Her concern was with representation of other cultures, and it extended to ethnic groups other than Maori, hence the theme of her second children’s book Watercress Tuna and the Children of Champion Street.

Overall, the session was an understated affair, but the audience remained attentive, and we were rewarded with a reading by Grace from her new novel Chappy, to be released at the end of the week.