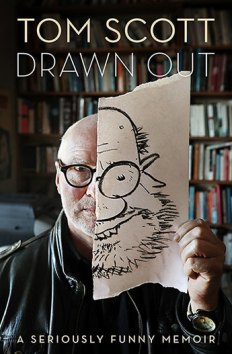 Tom Scott is probably better known for being a cartoonist rather than a writer, but his memoir, Drawn Out, proves he’s just as witty with words as he is with pictures.

The book tells the funny, heart-warming and often sad tale of his life and goes some way towards explaining where he got some of the material for his cartoons and plays.

When people say they had a hard time as a child, they probably don’t mean as hard as Scott’s. His father could be cruel and it’s pretty clear Scott wasn’t his favourite child. Cartooning and acting up in class were ways for him to express his feelings, but rather than pursuing any of those creative endeavours he decided to train as a vet. As an animal lover, after reading some of the things he and his mates got up to, I’m glad he gave up on the idea of being a vet!

Drawn Out provides some fascinating insights to major events that happened in New Zealand as Scott illustrated or wrote about most of them. He riled bosses and prime ministers alike (he was famously banned from going on an overseas trip to China by then prime minister Robert Muldoon), but he obviously got on well with many of those he came across in his working life, some of whom became close friends.

Scott has a knack of bringing people to life in his writing. You feel sorry for the cards many of them got dealt – Scott included – and the background he offers helps provide a better understanding of why certain decisions were made. However, some of the anecdotes about people still living do at times come across as a tad gratuitous, as do the snippets of plays and scripts that are dotted here and there.

There is no doubt Scott is a talented writer, but the book could have done with some judicious editing as it wanders and backtracks a bit. He has been there and done that, but it’s a bit hard to keep track of all the people, events and memories. One person is mentioned early on in the book and I hazarded a guess as to who they were, but it wasn’t until page 295 that this was confirmed.

Overall, Drawn Out is a good yarn in the style of Barry Crump. If you’re interested in the people who made the news and the lives of those who reported on them, you’ll enjoy this book.