Each time the Writers & Readers Festival comes to town, the Dunedin autumn becomes clear, still and nuanced. Catherine Chidgey sat on stage this Sunday afternoon and embodied the qualities of the season.

The festival audience was treated to an articulate conversation between Chidgey and Emma Neale, herself a poised speaker and talented writer. The word and thought chemistry between the two speakers was significant, and it enabled a depth of response from Chidgey on such topics as the tug of Germany, the novelist’s craft and the thirteen-year gestation of her new novel, The Wish Child.

Neale began with an autobiography of Chidgey the writer, and a description of her particular talents. This was an excellent way to bring the audience into the circle of conversation. Chidgey then read a long passage from The Wish Child; this drew the listeners in closer still, and provided context for the ongoing discussion (as well as convincing anyone sensible that this was a book to buy and read in its entirety).

The scene that was read was laden with sensual, often visceral detail ‘…the glittering callipers above his skull…’ ‘…the bees huddled in their hives… and the geese hung by their necks…’ and foreshadowing ‘German boys should be brave… should know that some things had to die’; this combination of delicate detail and exaggerated description is deliberate on the part of Chidgey, and a feature of her best writing. There are echoes of Gunter Grass’s Tin Drum here. The effect is a sense of constant unease for the reader, a feeling that death lives inside ripe matter. This style of writing, of perceiving is entirely appropriate to the subject of the novel: Nazi Germany and its aftermath, a time when bizarre, exaggerated things happened and became part of daily life. 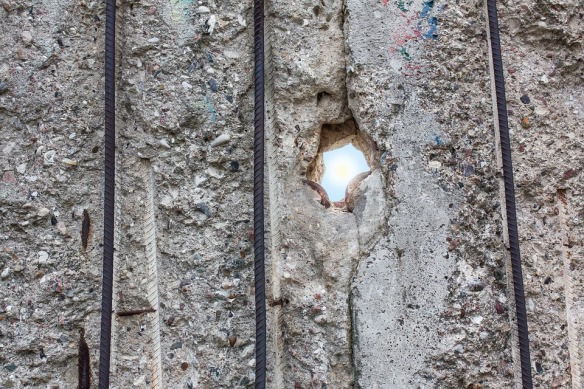 During the course of a very swift hour, with fingers fluttering in a Lynchian sort of way, Chidgey laid out the processes involved in writing The Wish Child: her connection to Germany based on time spent there as a shy high school student from Lower Hutt, then on a scholarship in Berlin not long after the fall of the wall, being affected by the visible history in a city still divided. She spoke of the balance to be found between writing and researching, so that the latter doesn’t dominate unduly yet is given the opportunity to shape the narrative. She spoke of the scope of this novel being larger than any she had written previously, of how life events intervene, of how writing Facebook posts about cats had distracted her at times… cue knowing laughter from the audience. Now she works two jobs and has a toddler, so 6am has become the time to write, which has not been a bad thing, ‘as the internal censor does not yet seem to be on!’

When Emma Neale closed the session with the question, ‘And what next?’ Chidgey was able to allude to two projects in progress, which was reassuring; from a selfish point of view, it is good to think that after The Wish Child there will be more from the still, clear, nuanced mind of a fine, fine writer.

Attended and reviewed by Aaron Blaker on behalf of Booksellers NZ

When a young Englishman on secondment to a Berlin bank witnesses a violent assault on a woman, he does what most of us would do – intervene and try to stop it. For Jago Browne, that sets in motion a chain of events that will test the mild-mannered banker and put his life – and the lives of many others – in danger.

The man who committed the assault is Marcantonio, grandson of Ndrangheta crime boss Bernardo Cancello. In Berlin learning how to channel the money his family makes from crime into legitimate businesses, he can’t resist demonstrating his power by earning a little on the side. Little does he know that his run-in with Jago will have devastating consequences for his whole family.

After reporting the assault to the police and realising no action will be taken, Jago takes matters into his own hands. Instead of going back to his safe job at the bank, he follows Marcantonio to Italy with the intention of teaching him a lesson. Helped by Consolata, a woman who hates the criminal gangs as much as he does, Jago ends up hiding in a cave on a hillside above the Cancello home. He has no idea there are two undercover police officers (Fabio and Ciccio) nearby and that his presence could sabotage a long-running surveillance operation to flush out Bernardo. What is Jago there for? Will he succeed where trained professionals have so far failed?

As you would expect from a book about a Mafia-style family, there are a number of violent deaths. Some historic deaths still haunt those involved years later, including a priest who shares a dark secret with Bernardo that he can’t live with any longer.

This book has a huge cast of characters and for that reason the first hundred or so pages involved a lot of flicking back to work out who the different names belonged to and how they fitted in. In addition to the various members of Bernardo’s family and inner circle, there are small-time English gangsters, undercover agents, a police prosecutor, and officers from several different countries. Every day they all live with the danger of discovery – but who will be the first to be exposed? Jago? Fabio and Ciccio? Bernardo? Or someone else?

The pace picked up about halfway through the book and the plot developed a few unexpected twists and turns that kept me eagerly turning the pages. However I have to admit I found the last chapter unsatisfying. Several loose ends and a final twist that I don’t think anyone would have seen coming left me a little disappointed with No Mortal Thing.