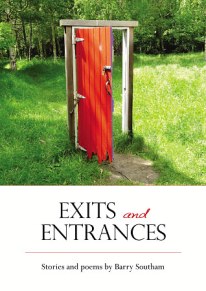 Exits and Entrances is a collection of both prose and poetry that describes characters at different points of their lives. Some of these figures are closer to the edge of certain exits and entrances, while others watch these borders being crossed in front of them.

Southam’s poetry is short and sweet, describing images that hint at lives beyond what can be seen. The poem Footpath Conundrum describes a torn photo as a ‘quartet of colour’. Lost without an owner, the photo is a fracture that ‘remains unanswered’; even the smallest things like a photo on the footpath carry their own resonances. His poetry also hints at change that is yet to occur; the poem Artist’s Studio is a piece that works in this way. It describes paint as’lifeblood’ for an unnamed character that works in the studio. These splashes of colour will soon become part of another canvas that is yet to be mounted, and therefore another piece of art. Without even describing the artist himself, a rich landscape is instead formed through the setting.

Southam’s pieces of prose also broke up the poetry nicely. Made In Heaven describes a rushed marriage through a cheeky main character who suggests, ‘If war breaks out, I’m going to maintain the Switzerland position,’ when drama seems imminent. Playing upon the setting of a wedding gone wrong, Southam brings just the right amount of absurdity to explore the complexity of human emotions that lead to such decisions. Sunday Crossroads is another piece of prose that looks at human nature, this time in the setting of a bush walk; it explores the tugs between pride and fear, the unknown and the safety of home. It is only the good sense of one of the figures that gets the characters out of the bush before it gets too dark. Needing to be reassured but unable to find it in the people around him, another character repeats “We’re okay now… We’re okay now” to himself like a mantra.

However, many of these prose characters fell flat, especially against the richness of the poetic language that surrounded it. A few of the stories were told through the perspective of characters who were passive figures that observed others undergoing change, rather than actively changing themselves. For this reason, I found myself wanting to know more about characters that weren’t focalised through the narrative, causing the actual main characters pale in comparison.

Nevertheless, Southam ends the collection sweetly with a section titled Two Memoirs. The poem Walking With Jim is a casual conversation that portrays the easiness between two characters while they mull over their history. Meanwhile, the poem Another Town, Another Time focuses on change in relation to place, describing the small town of Kawhia, before inevitably moving on to bigger cities.

The final poem, On Daffodil Day, is a pensive piece that describes a man in a hospital cancer department, surrounded by “terminal decisions”. In this way, the collection ends on an exit, but the former poems reflecting on change makes it clear that there were many entrances and exits along the way that lead to this final departure.