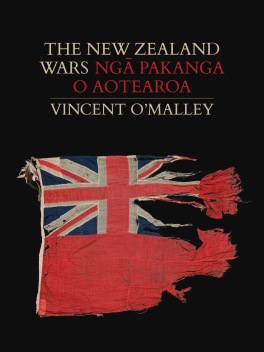 Sensitively tracing inter-racial & inter-Māori events from the signing of the Treaty of Waitangi (ToW) in 1840, until the end of armed conflict in 1872, O’Malley highlights events at significant variance with the sanitised, even romanticised, history still mostly accepted by the dominant culture.

Building on the work of other historians such as Belich & King, O’Malley exposes the early betrayal by the Crown, then the Colonial Government, of the central article of the ToW, namely the ‘…unqualified….chieftainship over…’ & ‘…full, exclusive & undisturbed possession of their (Maori) land…’ This in return for acceptance by Māori of peaceful settlement by Europeans.

Driven by pressure for land as the number of settlers rapidly grew, Crown representatives forged pretexts for taking military action against various Iwi & groups deemed hostile to the Crown, with the unspoken intention of forcibly acquiring land.

O’Malley provides an excellent chronology of armed clashes, from the Northern Wars in 1845, to the final shots fired in pursuit of Te Kooti in December 1871. He gives particular focus to the Waikato War (which sparked the Māori King Movement) & the unjust invasion of a peaceful Parihaka. Attendant atrocities are well articulated. As is the intolerant settler attitude towards Māori as an inferior race once Pākehā predominated – this mindset ‘justifying’ actions in breach of Treaty obligations.

Highlighting land confiscations & other injustices inflicted on Māori, first by force of arms and then by weight of numbers, (by 1860 Pākehā outnumbered Māori), O’Malley makes a connection between the loss of land & self-sufficiency, and an abiding grief & anger translating through subsequent generations even to today. He postulates that that unhappy mix puts into proper context the harsh reality of Māori over-representation in negative societal statistics.

The New Zealand Wars | Ngā Pakanga o Aotearoa is well-written & illustrated, and comprises another forward step in establishing a truthful & accurate history of the founding years of our nation. It suggests itself as compulsory reading in our schools’ history classes.