My second session for the day, again, a writer I had not heard of before. This man is amazing, the session was packed, full, in the gorgeous Heartland tent complete with ‘stained glass’ borders around it, the perfect setting for such a unique storyteller. A. N. Wilson is English, public school and Oxford educated. He is very well known in the UK as a writer, newspaper columnist, for his extensive writing of biographies, novels, and for his religious views. He has written biographies of all sorts of people – CS Lewis, Queen Victoria, Jesus, Dante, as well as the city of London. Much more recently his increasing interest in historical fiction has resulted in the publication of Resolution, the subject of this session.

The man is a born entertainer, and there were so many laughs from the audience as he regaled us and weaved all over the place with his tales of life on the high seas, the Pacific Islands as seen by Cook and his crew, the French Revolution, Captain Cook himself, Boswell, what scurvy does to you, a stale marriage, Goethe, public school education, and, hilariously, roast penguin.

Most of us will know Resolution as the ship that Captain Cook captained on his second voyage to New Zealand/South Seas over the years 1772-1775. This novel is not about the Resolution or its voyage per se, but more about George Forster who was on this voyage.

Having had enough of botanist Joseph Banks on the first voyage, that of the Endeavour, Cook employed naturalist Reinhold Forster for this second voyage. I don’t know the reason, and I vaguely recall Wilson saying something about this, but Reinhold also took his 12-year-old son Georg on the voyage with him. What an extraordinary thing to do with a 12-year-old child, going to the other side of a little explored world, looking for the southern continent – Antarctica – in a sloop not much bigger than the tent we were all sitting in.

Reinhold made himself as unpopular on the voyage as his predecessor Dr Banks did, plus it seems young Georg didn’t have the best time either, being under the control and domination of a tyrant of a father. His refusal to eat his daily ration of sauerkraut resulted in him getting scurvy which must have driven Cook crazy, but because George was under his father’s control and not Cook’s there was little Cook could do. Refusing this daily dose was a whipping offence, such was Cook’s passion for the health of his crew. 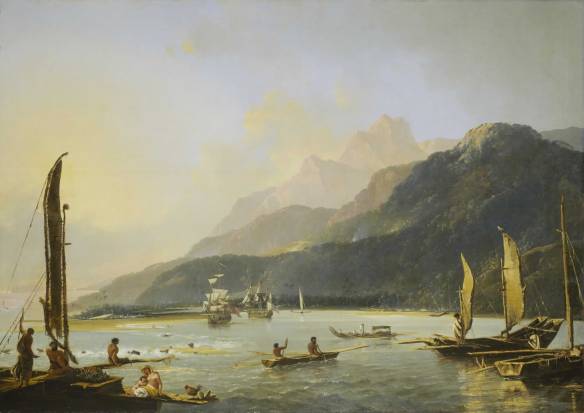 Resolution and Adventure in Matavai Bay, by William Hodges

Georg was a born artist and during the voyage did the most exquisite and detailed drawings and paintings of flora and fauna encountered on the voyage. Fortunately, most of these works were acquired by the British Museum (another wonderful diversion story by Mr Wilson), and can be viewed there. Georg rocketed to fame when at the age of 23, he published his journal of the voyage, some weeks ahead of Cook’s journals, and considerably fatter. It was an instant success, to the absolute fury of Cook, resulting in Forster being admitted to the Royal Academy.

His future as a scientist and naturalist would appear to be sealed, and he ended up being the librarian at Mainz University in Germany. He became extremely interested in the revolutionary ideas of Benjamin Franklin and the Enlightenment, being one of the founders of the Jacobin Club. He was in Paris when an Austrian/Prussian force took control of it, resulting in him being considered an outlaw for his ideas. He ended up dying in Paris, unable to return to Germany. He was only 39, but look at what he had packed into those years. He had married unhappily, to Therese Heyne, with whom he had three children. She remarried and became a successful novelist, in the Jane Austen vein. In yet another wonderful anecdote, Wilson told the story of how he saw Forster’s small desk that he had on the Resolution with him, in a Captain Cook museum in Whitby that had been donated by a descendant of Forster’s.

Without having read the book the father-son, parent-child theme would appear to be quite strong. Wilson talked a bit about this when asked about why he chose Georg Forster as the subject for his novel. He said that he had read Reinhold’s journal of the voyage, finding it very funny, and in total understanding as to why he was known on the ship as the ‘tactless philosopher’. He did get to wondering what it would be like to have this man as his father.

Wilson, it seems, had a wonderful relationship with his father who was much older than the average father. He spent lots of time with his father, good time, but couldn’t help notice that others saw his father differently, not necessarily in a good light, from how he saw him. I think we all have this with our parents to a certain extent, but for Wilson, it would appear there was a most noticeable and puzzling difference to the two types of relationships.

Aside from this most personal of revelations, this was an extremely entertaining and polished delivery. Wilson was very at ease with this audience, we hung on his every word, he had wonderful illustrations – Forster’s art work, portraits of him pre and post scurvy, his wife, the guillotine in action. The information, the stories, the anecdotes just flowed out of him, and he was even able to incorporate the noon chiming of the Town Hall clock into yet another French Revolution piece of gore – Quasimodo, as well as the Red Arrows overhead with a passing helicopter. We would never have got that level of entertainment sitting in one of the fully enclosed Aotea Centre theatres!

I wasn’t around in the 80s, my parents are still going strong after 34 years of marriage, and I don’t like baked beans. While I found little in common with the life of this narrator, 12-year-old Harper Richardson makes What a Way to Go an easy read, and excellent debut for Julia Forster.

Harper’s mum gets her, the house, and hundreds of cans of baked beans; her dad retains a mouldering cottage in the Midlands. Harper is torn between her parents, trying to fix everyone else’s problems, rather than being her quirky 12-year-old self. That said, she seems to have more sense than the rest of the adult characters, and may even be best-placed to fix these problems. Just a warning – I wouldn’t suggest buying this for a teenager whose parents have divorced recently unless the matter has sunk in well.

The novel walks a thin line between its marketed genre of YA and adult literature. Forster deals with some heavy topics that even the most mature YA reader may find confronting, and some of the 80s references might go over some readers’ heads.

I’m not a huge fiction reader, but I found What a Way to Go a nice break from my usual non-fiction books. Forster has crafted a funny and quirky narrator from Harper, and I’m sure this novel will please both younger and older readers.

Kim Leine is a Danish-Norwegian novelist. He received the Golden Laurel award and the Nordic Council’s Literature Prize for this, his fourth novel, The Prophets of Eternal Fjord.

If you enjoy historical novels, mixed with a bit of fantasy, with dark forces aplenty, the epic storyline in Prophets of the Eternal Fjord will certainly appeal to you.

The opening chapter sets the scene for the novel, with missionary Morten Falck pushing a woman off a cliff in Greenland in 1793, with her willing participation.We gradually unravel the whys and wherefores of this drastic action over the following 500-odd pages of the novel.

Newly-ordained priest Morten Falck sails to Greenland in 1787 to convert the Inuit to the Danish church. The Sukkertoppen colony, is a harsh environment, is a far cry from the parish he envisaged while studying in Copenhagen. During his study, Falck was absorbed by the ideology of Rousseau – particularly the sentence ‘Man is born free and everywhere he is in chains,’ which dominates his thinking during his dark moments.

The missionary becomes involved with those in his care: his ambitious catechist, a lonely trader’s wife, and a widow he comes to love; but his faith and reputation are dangerously called into question. A number of native people reject the Danish colonial settlements and establish their own community, Eternal Fjord, living without Danish rules. Falck lives with them for some time, creating a number of challenges for him.

The book is divided into three parts, with the second part called ‘Colony and Catechism,’ with The Ten Commandments as chapter headings. However, sins replicating the exact opposite of the commandments occur: among them a rape on a Sunday, a nasty abortion and a theft leading to a fire.

The novel travels back and forth in the years between 1782 and the early 19th century, as well as between various locations in Denmark and Greenland.

It took me a while to sort out the characters and time frames in this book, but it was a great read and will be enjoyed by anyone who enjoys a historical novel. The author does note some events included in the novel are pure fantasy and did not necessarily occur, but the more significant cultural occurrences, such as the great fire in Copenhagen, were as accurate as possible.

Leine uses wonderful descriptive language throughout the book, for example: ‘The fog still lingers in the bays and where the sun has yet to reach. It is as though the rocks are shrouded in gauze and tulle. It makes him think of death.’

The book has been translated from Danish by Martin Aitken.

The opinions on this blog are those of individual blog contributors and not necessarily those of Booksellers New Zealand.
Booksellers NZ – Book Tokens