This is the first poetry collection of multi-award-winning

writer New Zealand, Alice Miller. It’s an extraordinary book, a departure in style and tone from anything else like it in New Zealand poetry.

The book has an unusual tone, it’s folkloric and gothic, seductive but remote. There are poems referencing Tolstoy and Helen of Troy, poems about Antarctica and poems about love. There seems a great distance between poet and reader, as though the poet is shouting across a ravine. The poet’s voice is both grand and chilly.

The poems reminded me of contemporary song lyrics − like the work of Feist on her album ‘Metals’, the Bowerbirds, Fleet Foxes and Bjork − more than any New Zealand poet contemporaries. Like these musicians, Alice Miller employs playful natural imagery to engender overwhelming human emotions, but it’s gestural natural imagery rather than specific. It’s the natural world of our collective imagination, rather than the literal, inhabited nature of our bioregions.There are trees, forests, rivers, maps and armies in the book, yet oddly, little sense of place. Apart from a couple of images of the contemporary world: an ATM, a mention of a computer screen, these poems could have come from any (recent-ish) time, any place. It would be easy to get this approach very wrong − contemporary poetry makes much of specificity − but the imagery is for the most part interesting and deft and there is real emotion here, enough to give the poems heft.Nature mutates, misbehaves and shape-shifts:

‘When we go to the field
to recover our weapons
all our axehandles
have grown back to trees.’

There’s a sense the terrain of the book is constantly shifting, nothing defined will stay defined.

Alice Miller marries human moods to the mythic, emotions to both history and an uneasy future. This is romantic writing in terms of the tone of awe and the poet’s experience of the sublimity of natural phenomena. The poems are trying to negotiate an often hostile natural and emotional terrain. The poems rail and rally.

It’s also romantic in the sense of poems of intimacy and love. The opening section: ‘skin’, consists of three beautifully written love poems, the vulnerability in the poems is palpable: ‘It’s strange to be the same planet / but split to forge a new, raw globe‘ and ‘This stitching between bodies isn’t skin / It’s only old rope easily cut. / Where the seam tears there’s blood.‘

At it’s best, The Limits did take me to, and beyond, the limits of my imagination, with elegant, intelligent images and explorations. Occasionally the writing is a a bit elusive, a bit too fanciful, but for the most part, Alice Miller has created an imaginative and philosophical world I was pleased to dwell in.

Book fans will be spoilt for choice with 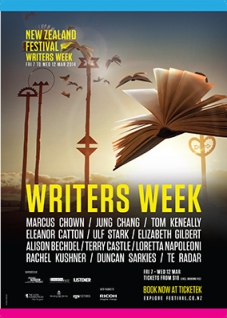 Celebrated author and illustrator Gavin Bishop will deliver a literary “state of the nation” at the New Zealand Society of Authors 2014 Janet Frame Memorial Lecture (6.15pm, 10 March, City Gallery) as part of 2014 Writers Week. This annual lecture is free, and will discuss the current state of literature and writing in New Zealand. For over 30 years, the lives of children and grown-up children have been shaped by the books of Gavin Bishop. Introduced by Wellington Mayor Celia Wade-Brown, Bishop’s lecture will focus on the value, standing and role of illustration in children’s literature.

As a picture book author and artist, Gavin Bishop has published more than 40 books and won numerous awards, including the Margaret Mahy Medal for Services to Children’s Literature in 2000. He has also written for television and the libretti for two children’s ballets for the Royal New Zealand Ballet.

Another free event, First Published (6.15pm, 11 March, Meow Café), will feature four exciting new voices on the local literary scene in a session chaired by New Zealand Post Book Award winner Steve Braunias. Fall in love together with the protagonist of Sebastian Hampson’s novel The Train to Paris; marvel at the influence of that extraordinary instrument, the theremin, in Tracy Farr’s fictional biography The Life and Loves of Lena Gaunt; and relish the poetry and insights of Irish-born Caoilinn Hughes and recent Michael King Writers’ Centre resident Alice Miller

Local visual art fans and aficionados can enjoy a special screening of The Man in the Hat (7.30pm, 11 March, Film Archive, koha), the documentary portrait of influential Wellington art dealer Peter McLeavey, directed by Luit Beiringa. The film explores McLeavey’s early life and the more than 500 exhibitions he went on to curate from his history-making Cuba Street gallery. Beiringa will introduce the screening and be available afterwards to talk about this extraordinarily influential character.

For more details about these events and more visit the New Zealand Festival website: www.festival.co.nz\