Ask your local bookshop about this book today.

A six foot tall mutated triceratops from the year 69, 211, 821 BC roams both the present and future in order to find four other humanoid dinosaurs, the Raptors, and bring them to justice for their murders and crime. Of course his mission would come easier if he wasn’t a towering green skinned man with horns. Though even with this setback he manages to go forward and fight for his goal, which along the way involves three young human allies, monsters, robots, an interfering Police force and panicked civilians.

Blastosaurus takes place in three separate time periods, the past, the present and the future. All of which Blastorsaurus travels through in order to avenge his mother who was killed by a gang of four human-like raptors. Both the raptors and Blastosaurus lived natural dinosaur lives in prehistoric times until their genetics were mutated by humans from the future. Using a time travel pod the raptors and Blastosaurus go forward in time to a future city controlled by robots and living under fear of ‘monsters’. This is where Blastosaurus encounters three young adults; Richard, Emma and Alana. A group that goes by the name of ‘freedom fighters’. Angered by the Raptors and how they have managed to turn this city; Freakout City into a chaotic mess Blastosaurus decides to travel to the present day to stop them from causing destruction before they can.

The story is based around the perils of Blastosaurus and the lives of the three children. Richard Greene is the main child and a self proclaimed allie of Blastosaurus. He offers to partner up with Blastosaurus to defeat the Raptor gang. Richard is an imaginative child, who adores comics and the superhero genre. Richard’s other friend is Alana, a level headed if sometimes harsh girl. There’s also Emma and her younger brother Sam. Blastosaurus himself is a dinosaur driven by the goal to find and kill the raptors that killed his mother. He is a stoic character with mostly good intentions in mind.

The art of blastosaurus is great, it’s detailed and has a good colour scheme. Emotion and action is portrayed well on the characters. The settings are also a strong point giving the comic a strong and usually dark atmosphere. The style in both art, writing and story is reminiscent of the absurdities of comic books before the 21st century. The dialogue is straightforward and highlights each character’s emotions and thoughts with ease, it’s also witty and often finds some humour even in dark or upsetting situations.

The people involved in the creation of this text are Richard Fairgray (who is notably legally blind, with only 3 percent of his vision in one eye) – Co-writer and artist, Terry Jones – Co-writer, Tara Black – Colourist, Rob Levin – Editor and Darick Robertson drew the cover with Richard P. Clark colouring it. 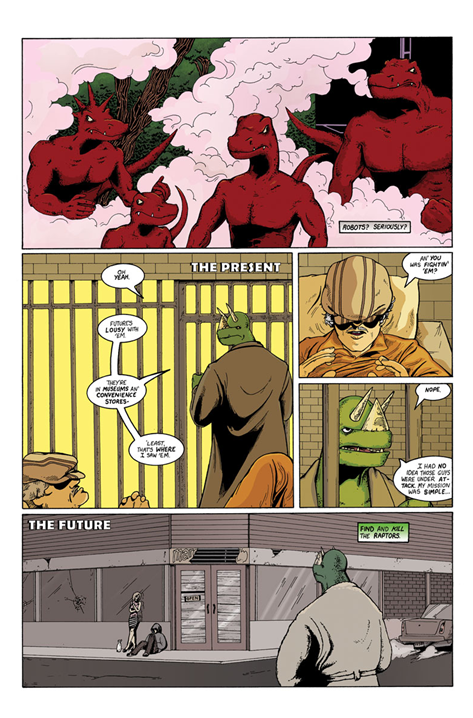 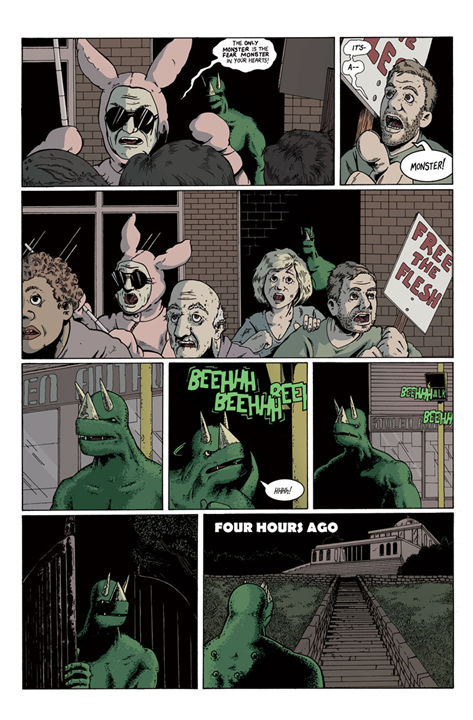 Images from Blastosaurus the online version, pages 92 and 159.

It’s always refreshing to see comics created by the hands of talented New Zealanders being published. Comics and Graphic Novels can be often overlooked or overshadowed by other forms of writing. Buying this book (or any other form of comic) will show support to both the authors and the comic industry as a whole and while this book does end unfinished the reader can continue reading the adventures of Blastosaurus online at this link : http://blastosaurus.com

I would recommend this book to anyone who enjoys thrilling action based, crime solving adventures (that of course span over a few different time periods).

WIN A COPY OF BLASTOSAURUS
Thanks to the publishers we have a copy of Blastosaurus to give away. Leave a comment below and we’ll draw a random winner on Monday, 25 March 2013.