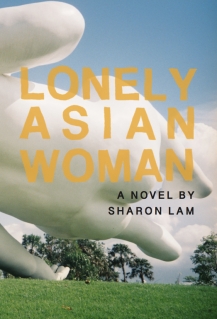 A series of small, yet misjudged decisions by Paula escalates into a surreal period of her life, an honest representation of the years following university.

Sharon Lam’s Lonely Asian Woman is the culmination of all her best work; the hilarious everyday commentary of ‘Single Sad Postgrad’, the insight from a break from expectation in her architecture thesis and of course, the surrealism of her Starling poem ‘Everyone at the Pool Looked like Ewan McGregor.’

Lonely Asian Woman is Sharon Lam’s debut novel. She has already made a mark on Wellington; after completing her Masters of Architecture, for which she was a finalist in the NZIA student design awards for her thesis ‘Architecture for you, me and the bees’, she went on to study at Victoria’s International Institute of Modern Letters, for which this book was written. She has been published in Starling Magazine and wrote for Victoria University’s Salient student magazine including a weekly column ‘Single Sad Postgrad’ in 2016.

Sharon’s Salient column, with titles such as ‘Eulogy for My Love Life,’ ‘I Found Myself, You Can Ask Me Out Again Now,’ and ‘Boys (I Never Dated) But Am Definitely Over’ is a taste of the comedic surrealist tone of Lonely Asian Woman.

Our main character Paula, comes to a point of self-realisation as a ‘lonely Asian woman’. She is in her mid-twenties, unemployed and generally lacking in motivation. The blurb warns that this ‘is not the story of a young woman coming to her responsibilities in the world.’ This is an understatement.

Don’t expect a story focusing on the everyday life of an unemployed twenty-something to become a coming of age arc. Rather than acceptance of adult life, Paula’s series of misjudged decisions, patchy attempts at normalcy along with the occasional moment of joy is an honest representation of the years following university.

The struggles of Paula, which I have felt in this week alone:
1. Wanting financial independence but not wanting a job.
2. Wanting cheesecake but not being able to afford cheesecake.
3. Lack of motivation do something other than stay at home all day watching reality TV.

Lonely Asian Woman sets the bar or perhaps lifts the standard for the ‘coming of age’ genre. It is honest, it is genuine in its moments of friendship, loneliness, and mistakes. There is no clean arc and resolution, but small, everyday successes shine a hopeful light on the mundane reality of our own lives.

The drifting of Paula’s thoughts as well as striking moments of self-reflection make her an utterly believable and sometimes tragically relatable character. Throughout the day to day of Paula’s life, we have insight into her thoughts; weighing up the Taoist definition of peaches as the ‘fruit of immortality’ and cost on a supermarket trip, reading the brand name HEAVENS SAKE in the voices of a geriatric Finnish man, Barney and a drive-thru speaker. An interesting figure was Paulab, a disturbingly autonomous corporeal representation of the side of Paula she may prefer to ignore. Paulab appears abruptly at random times throughout the book, almost like a flatmate who you put up with despite their sheer lack of likeable qualities.

However, in moments of weakness and general lack of common sense, Paula left me in disbelief. The plot line became increasingly bizarre, even more so for the slow normalisation of all that was happening to Paula. A series of small, yet bad decisions by Paula escalates following an incident in which she steals a full supermarket trolley. From that moment on, one must be careful not to overthink as they read. Believe me, Paula doesn’t.

The strength of Lam’s writing, as with ‘Single Sad Postgrad’ is her ability to simultaneously make the mundane hilarious and insightful. She excels in short form writing, elaborating on small stories or a train of thought. Lonely Asian Woman switches between conventional slice-of-life structure to lists, tables and sets of instructions. A personal favourite of mine was the comparison between Paula and her boyfriend, Eric according to the idea that ‘while there are two types of people in this world, there an infinite number of types of people in this world.’

I went into this book with high expectations from Lam (her memory at architecture school, her Salient writing). I came out slightly confused as to what exactly Paula had actually experienced. When one attempts to read Lonely Asian Woman with ‘real world’ logic, the result is confusion and disbelief. My advice is to read the book in the same way in which Paula navigates her life; take it as it comes with an eye for the humorous side, and you will eventually come to normalise the surreal. While the plot shocked me in places, it was an unusually satisfying read. One which left me looking at everyday life with an almost alien perspective of the ridiculous situations we normalise. Refreshing and relatable, a definite recommendation.