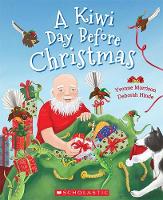 We all know the classic story about Santa Claus living at the North Pole along with Mrs Claus and of course not forgetting those wonderful reindeer, but now we have our very own Kiwi version.

Santa was down at the bach fishing when Mrs Claus comes along and reminds him that he needs to get cracking as the big day isn’t far away. He then remembered that it was Christmas tonight so he had better get himself organised. He packs up his gear and heads up the hill at full speed on his quad bike after a quick brekkie of toast and yeast spread (maybe marmite??). Santa’s helpers were having lots of fun and all the gift wrapping was almost completed.

All the finished pressies were stuffed in a sack and he got out his tractor. It needed a spruce up first, so Santa took it to the petrol station taking it through the car wash. With everything organised it was now time to get the team together. Where were the sheep? The last time he’d seen them was on Main Street at the Christmas parade. They’d all gone off to have a break before the big day. Santa was starting to feel a bit concerned. Shaun had gone diving and swimming with the seals while Buffy had gone shopping to find the best deals. Jason and Flossy had gone wine tasting while Bossy went zorbing and onto a zip line.

This is one heck of a story and one that will be received with a bit of trepidation by young ones, as they know that Santa Claus lives at the North Pole and it’s reindeer, rather than sheep, involved in getting the sleigh through the night, delivering presents all around the world.

I read this story to 4-year-old Quinn. A look of disbelief on her face with lots of questions forthcoming. Where are the elves in this story Grandma? ‘I don’t believe this one’ – clapping a hand over her face very dramatically. ‘Are you telling porkies Grandma?’ Who knows, I might be, but then I may well not be!

A fabulous story and one that I think will be a hit this year with young ones. The illustrations are just great, capturing just the right tone, and bringing the story together.