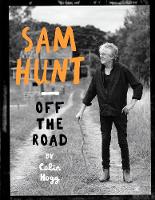 ‘Tell the story. Tell it true. Charm it crazy’. So says Sam Hunt as his maxim for writing. In Off the Road we have an extended conversation between the author, Colin Hogg and the subject, Sam Hunt. But this book is not just ‘this is your life’, oh, but you’re not dead yet.

Colin Hogg has been a long-time friend and has already written about Sam Hunt in Angel Gear: On the Road with Sam Hunt. This was 30 years ago and the book cleverly includes some chapters from Angel Gear telling background stories and on the road tales. The friendship between Hogg and Hunt is the basis of the book and their interviews range from deep thinking introspection to alcohol-induced babble. It is all here.

But it is wonderful. The gems start on the title page with a 1987 photo of author and subject. The black and white photos support the rambling text. There are images of Sam, the sea, the shelf, his toes, the trees and his poems. The poems are right through the text, old and new. The references to other poets, to writers, to academics to drinkers and to inspiring women. This book is a celebration of the collection of things which give us meaning and beauty.

While there is biographical information included, it is part of a story and not just a listing in the dictionary. Hogg allows Hunt to recall his Father, and his Grandfather, but keeps him on track with questions to shape the responses. I learnt a lot about Sam Hunt but also began to see that the poems were part of who he is, not apart from him. As Hogg commented ‘poems fall from him like leaves from a tree’.

There is a darker side to the book. The process of aging is a constant companion and Hunt seems to see death stalking him. Sam Hunt’s decision to stop touring was a huge one. Over half his life has been lived on the road. His gigs cover every possible dot on the New Zealand map. Solitude is also mentioned as he lives almost as a recluse. As Hogg says, ‘mortality bounces through his conversation like a big black beach ball’.

And this leads to the parting comment at the end of the book. After reading the first drafts, Hogg received a phone call with a clear instruction from Hunt.

‘Sam is happier than earlier reported. Put that at the end.’ So he did.

I enjoyed catching up with a poet who has greatly influenced my life. As a young writer, I sent him my offerings, along with every young aspiring schoolkid. He replied a number of times, and some poems were published. Those letters are my treasure, much to my adult children’s amusement. Is Sam Hunt a National Treasure? You just need to listen to the lilt and lift of that voice to know the answer.