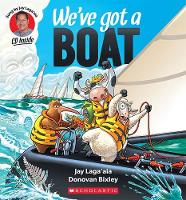 Thanks to New Zealand’s recent history of America’s Cup challenges, most Kiwi’s are well-versed in our collective yachting endeavours. The cup has captured the heart of the nation and been at times extremely exciting. When it came to light the late Sir Peter Blake wore his lucky red socks in the final push for our first win, we all donned them to wish him well the next time.

This is a great book with the America’s cup campaign starting in the next couple of years, and with New Zealand defending the cup. The illustrations by Donovan Bixley are bright and clear, and include native birds and farm animals filling in for the crew. The crews from other countries are depicted as a variety of other hilariously depicted animals.

At the back of this book are photos and facts about crew and the boats used in previous campaigns. Also accompanying this book is a CD, sung by Jay Laga’aia, who also authored this book.