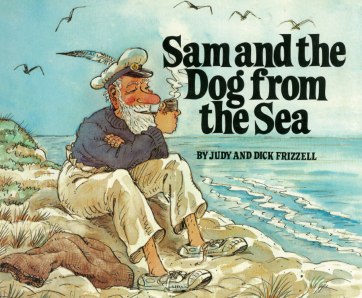 Sam is an old sailor who still wears his captain’s hat with a seagull’s feather stuck into the band. He lives in an old tramcar decorated with treasures sourced from his scavenging among the flotsam and jetsam that the tides bring in.

A storm is on the horizon and Sam, lying in bed can hear the roaring of the winds and the lashing of the rain against his windows. He gets up early the next morning walking along the beach looking for possible treasures. He finds what he thinks is a dead seagull or an old towel but as he picks it up he sees it is a dog, probably dead, but then a little brown eye opens. Taking it home wrapped up in his woollen jersey he hurries home. Putting the dog in front of the fire Sam towels the poor animal dry, fluffing up his soft white fur.

This is a beautiful story of love and friendship between a dog and an old man. Gorgeous illustrations, and the accompanying storyline is delightful.

Dick Frizzell is well-known to most New Zealanders as an artist. His wife Judy had written the story with Dick using his talents to compliment what is an already wonderful story.

This book was first published more than 30 years ago in 1988. On some friends urging, Judy and Dick Frizzell released this book once again. A fantastic decision as I haven’t read it before to any of my grandchildren. This story was received enthusiastically by my 3 ½ year old granddaughter Quinn.

1 thought on “Book Review: Sam and the Dog from the Sea, by Judy and Dick Frizzell”