AWF18: The Edge of Europe, by Kapka Kassabova

Arriving in New Zealand in the 90s, after the roll back of the Soviet Union, it was the excessive freedom and space, the shock of the ocean, that made a lasting impression on  Kapka Kassabova. The European experience is quite different, she explains to the audience and her admiring interlocutor Lloyd Jones. There, people internalise borders – these create a sense of home and delineate one’s space. But the border zone between Greece, Turkey and Bulgaria, the subject of her book Border: A Journey to the Edge of Europe, is particular; it is a liminal world and culture unto itself.

We start at the Red Riviera between Bulgaria and Turkey. We learn of ‘Sandals’, other Eastern Europeans who officially came to holiday in this region but had in fact planned their escape across the border. Many died in the attempt.

For as long as she can remember, Kapka has been obsessed with borders. Growing up behind the Iron Curtain, she wondered why people were allowed in, but they were not allowed out. The book was born out of her sense of urgency to tell the story of the border zone because a generation had already passed since the dissolution of the Soviet Union – people were beginning to forget, and to get old.

She shares a couple of pictures with us. In the first, young men and a German shepherd patrol the barbed wire fence in the 80s; the second, taken at the same spot just three years ago, is almost an idyllic vision, with the area reclaimed by nature. This border zone has been a corridor of migration for generations, it is just that the flow of people has changed direction. Walls and fences are going up again, to keep the refugees out. ‘History repeats itself quite literally,’ Kapka notes.

Lloyd describes her work as part excavation and part revelation of worlds that no longer exist. Kapka wanted to express the labyrinthine quality of the border zone, and the dense layers involved. She describes the places she journeyed to as distinct realms. There are Muslim villages that were established during the Ottoman period scattered through the mountain ranges to the north of Greece. ‘They have no place in the official histories. They are ordinary people in an extraordinary place’. 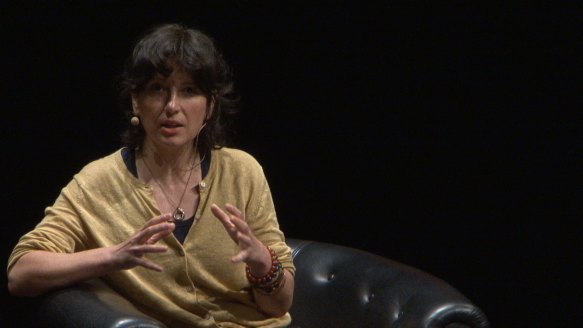 But much of this fertile region is empty except for phantom villages, some with only ten inhabitants left. The border culture has decimated the region and affected the psyche of those exposed to it. Kapka contends that the harder a border is, the more endangered people are. A culture of paranoia and surveillance spreads; the threat becomes internalised. She reads an extract from the book that features two generations of border guards – a sense of dread permeates the scene. Her reading amplifies the qualities she displays as a speaker: quietly compelling, eloquent, possessed of reserve.

For the refugees flooding into the region today there is little movement. There is stasis, an unbearable condition, where they cannot go forward or back. Kapka quotes Lloyd’s writing to describe the situation: they ‘run out of road’.

This was a wonderful session, although Lloyd, in all his enthusiasm and open admiration for Kapka, sometimes added to her thoughts a bit too early. I would have loved to hear her finish all of her polished thoughts. I look forward to reading the book, which Lloyd describes as the one Kapka was meant to write.