Novelist, poet and DJ Alex Wheatle talked about his life and the stories that created it in this rich and entertaining session in Schools Fest. 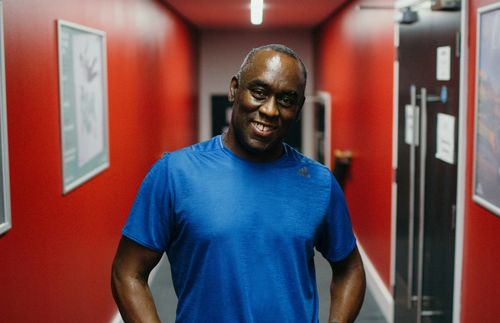 His mum had five kids in Jamaica, then left the violent relationship she’d been in to come to London. Alex was put in a children’s home in London when he was 3. He had a tough early life, in the home and foster care. He went to prison after the Brixton Riots for fighting the police.

They say write what you know – his childhood and teenage years certainly informed his fiction. He was, as a teenager, employed as a runner for a local crime lord. Lamar (Little Bit) is like he was, falling into crime and gang life without being sure it was the right thing to do, but feeling valued for the first time in his life doing these things.

Alex isn’t well-known in London as a writer, he is a youth worker. A mum once came to him and asked him to help her son out of a bad situation. He brought him into his youth club and did his best by him. Near Christmas they were due to go on a residential (canoe & rock climb), and this particular kid was really looking forward to it. He didn’t make it to the bus, then didn’t turn up at the club for four or five weeks.

An aunt came by the club and let him know what had happened – he had been stabbed and was fighting for his life. This is the reality of South London.

When Alex was 18, he went to court and all his friends had their families with them. He looked into the public gallery – he had no family, and this saw him to go prison suicidal. He went to Wormwood Scrubs, where he was pushed into a rank-smelling cell. On the top bunk was a rastaman, long white dreads,  one eye and no teeth. Next time this bedside cabinet was a pile of books. These books saved Alex’s life.

Alex was in a bad state by day 8, because every night this guy woke him up with a song, a psalm from the bible. He had the shakes, and a voice came to him, telling him all he needed to do to get some sleep was stab the rastaman. So that night, 3.30am, the torch goes on, the bible opens, and rastaman starts singing.

After he was beaten, he cried. He told the rastaman his sad story, and he asked him ‘What have you done to change the situation.’ Nothing. The next day, the rastaman took him to the library and helped him choose a book. He got The Black Jacobeans by C.L.R. James.

After prison, he kept reading, and realised then he wanted to write about people like him. He first did this as a DJ in the clubs, then wrote plays, adult-oriented fiction, then the YA trilogy he is here to promote.

Throughout the session, he read from each of his three books, and that was when the audience’s attention dropped. As long he was story-telling without reading, they were captivated.

The audience had great questions. One asked whether he still knew the rastaman from prison – he does, and he sends him all of his books, where he lives in Jamaica. Each time he sends him a book, he gets back 10 page letters about how he could have done it better.

Another teen asked him how he made good. How he went from being a criminal to becoming a youth worker and writer. He said ‘Once somebody had faith in me I figured I could do good.’ He had been a victim of a cruel system.

He wants teenagers to know they are heard, that he sees them. I came away from the session with a lot of respect for him.

Alex Wheatle is part of a couple of events at the wider festival, the details of which are below. He is a genuine talent, with compassion to burn.

The trilogy is the Crongton trilogy, the third of which is: