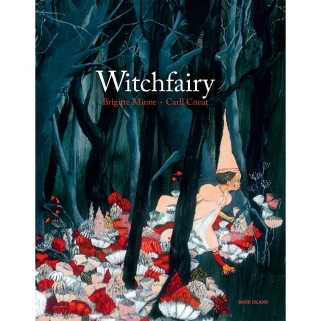 Fairies are expected to be neat and tidy and quiet and polite and speak with honeyed voices. “Rosemary thought fairies were really dull…. Rosemary would rather have been a witch. Witches were allowed to get nice and dirty and to shout and scream with laughter and to sail boats down the stream.”

This desire is not well met by her mother and after stamping of feet and a lot of shouting back and forth, Rosemary takes off to live with the witches in the dark wood. And… despite her mother thinking she will hate it, Rosemary loves it there! Finally she can be loud, and have fun, and learns to fly on a broomstick and gets her roller-skates. “Being a witch was the best fun ever!”

Mum misses her and visits Rosemary in the dark wood, where Rosemary introduces her to broomstick flying, sailing, and tea with the other witches. Mum discovers that the witches aren’t so bad after all and enjoys her time with them. She also discovers that her daughter is happy and overcomes her prejudice and gives Rosemary her blessing to be whoever she wants to be. In turn, Rosemary discovers that she likes being a witch sometimes and a fairy sometimes – she is a witchfairy.

Originally published in Belgium in 1999 under the title Heksenfee, this fairytale about finding your true self is delightfully different and very European in feel. Brigitte Minne has written over 200 stories for children and has won several awards in Belgium and internationally for her work. Illustrator Carll Cneut has also won awards for his work. (In this interview, you see him create art for Witchfairy as he talks about his craft). The illustrations are artworks beautifully hued in reds and pinks, contrasted with deep greys and black. The characters feature huge conical hats akin to those worn by European and Scandinavian gnomes, and rosy red cheeks. I love that the very first page has no illustration; we are drawn in and prepared for the tale with only four lines of text – expectations of the usual sparkly, dainty fairies come thumping down with the delivery of the fourth line, and in we go.

Book Island specialises in bringing well-loved, unique stories from Europe (mainly Holland and Belgium) to New Zealand, offering new perspectives and understanding. They seek to present these stories in beautiful, high-quality books, and Witchfairy is certainly one of them.